sorry about that. I did not intend to upset you or something. I just abandoned the forums for some time.
here is the diy I posted some time ago, but it’s in German: https://www.pocketpc.ch/fairphone/238755-fp2-qi-ladefunktion-nachruesten.html#post2288663
and it is, to be honest, more quick and dirty than an fully working expansion. But there you may see that it is not fake.
Meanwhile I managed to get a pcb design for the connector (beforehands I just connected the wires by tape) and I am currently looking for a cheap supplier to get these boards produced in a small amount

Try one of these:

Would be great if you would eventually sell those expansions to Fairphone owners!

sorry about that. I did not intend to upset you or something. I just abandoned the forums for some time.

I have to apologize @jayy I was just too excited and then disappointed for a cool solution, thanks for sharing your pcb design!

Try one of these:

AISLER - Powerful Prototyping for your electronics project made in Germany.

thank you for your support!
and yes, I would give these away for the manufacturing costs (around 3€ I guess) depending on how many I can produce at once.

did you find a solution to mount it stable on the FP2?

Neat project!
Stefan actually wrote me a message via twitter the other day, asking about my back connector project.

Seeing your PCB design I can already tell that you have some more experience with that kinda stuff than I do.

Do you have any ideas on how to properly secure them on the phone yet? My bottleneck that keeps me from experimenting and tinkering around right now is my financial situation. If I had that 3D printer already I would have tried out some stuff. I even had the idea to start up a Patreon campaign to support the project, maybe we could sort of team up or share ideas? Using something like Patreon is in my eyes not the worst idea, both in getting some financial support and giving back something to the people, e.g. prototypes.

The expansion board is not only useful for just wireless charging, but lots of other stuff too.

@duke1102 the expansion pcb mifht be usefull for many purposes. maybe we could plan to integrate it in a TOH a la jolla? on the other hand, there is not much space at the back of the FP2 for securely placing thirds party electronics.
@novski well, my plan of securely mounting is using the two small holes beneath the pin with kind of plastic needles and then I can use a ducktape or simply clamp it underneath the back cover. these plastic needles indeed seemed to me the biggest hurdle.
I will look at these shop proposed and tell you when I uploaded my Gerbers

k, I ordered 3 pcb with 45 plates each for about 40€. I will have to separate them and stuff, but we will be below 1€ per board even when I loose quite a few. As soon as I am ready I will tell you and eventually think about individual shipping to those who are interested, too. Maybe I even manage it to attend the #efct17 workhops in Amsterdam this July

The #efct17 is from 31st July till 6th August if you mean that by “workshops”.

For the next EFCT click here: #efct18 Hello everybody, after our successful 2016 edition of the European Fairphoners Community Trip to Amsterdam (click to find out what we did last time) we decided to meet up in Amsterdam again in 2017 (#efct17 ).

[image] Happy #efct17 participants on the ferry across the IJ. Who is going?

We welcome everyone, who is interested in fair electronics and wants to meet like-minded people in the town of Fairphone’s origins. We are looking forw…

the only hurdle we still have to take is the fact that Fairphone itself does not support the use of the expansion port due to FCC (EC as well?) regulations as I have been told by second level support once.

FCC as in the US Federal Communications Commission? Is the expansion to the US so near in the future?

I was a bit unprecise. Maybe it was not FCC but CE. I looked at the mails, it states only “certification required for regulatory compliance”. sorry for the confusion. Nonetheless, I hope Fairphone is still pursuing a plan to expand to the us market.

Hmm, well, my idea would be to create a whole new back cover for the phone using a 3D printer (or similar) that gives you a bit more space to work with, as well as options to securely mount the modules.

As I mentioned earlier, if I had access to a 3D printer I would have done some experiments already. I really hope that my financial situation clears up soon, still waiting on some money, reminds me, have to call my lawyer again and ask what the current status is.

Once I’m fluid I plan to buy a 3D printer on eBay, cheapest one I saw was around 145€, which is amazing when you think about it. (No worries, before I buy anything I’ll research it and see how reviewers think about it.)

In terms of the #efct17 I have to see what my schedule and finances say, in terms of being available around that date. I’m on vacation for like 2 weeks right before the meetup. Gotta get back in to work on the 07. August. (Also would need to find some place to sleep at, food, etc. - Transportation would be easy, using MeinFernBus, cheapest ticket is 17€ to Amsterdam.)

Oh and @jayy, I’m definitely also interested in one of the PCBs. Shoot me a message once you are ready with those. 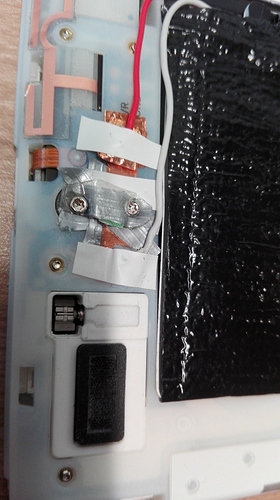 Very interesting! Wireless charging is the one thing I really miss the most about the FP2.

Did you make some tests regarding the charging time / current when using the expansion port?

I made a quick test today by connecting a bench power supply (set to 5 V) to the expansion port. The phone indicated that it is charging, but the resulting current was only about 90 mA. This would make it impossible to charge the phone in a reasonable time. Not sure if I did something wrong, but I wouldn’t know what.

@duke1102 great idea. well you can also use one of the various online 3d printing labs.
and I would surely send you a pcb then, maybe you (or we) can integrate this into the back cover

@charlie well done hack! I prefer not to change anything too much on the phone so currently I do not use these screws.
@ChuckMorris nope not yet, I will do some measurments. There must be an app for displaying the charging current

There must be an app for displaying the charging current

I have made good experience with Ampere (XDA), but unfortunately it is only available from the PlayStore.