[FP2 only] Back Connection for (wireless) Charging - Quick & Dirty Solution

I have been having trouble with a broken USB port for use with charging the phone and since Christmas and New Year is around there was no way to get a warranty replacement in time.
I had to improvise and in the end I came up with a really quick and temporary solution, making use of the GPIO pins on the phone.

Someone released some information about them on GitHub and I did some probing myself.

What you want to do is to take a USB charging cable and cut off the end with the micro USB port, then strip off the plastic around it and find the 5V and GND wire. (Search on Google for the USB pinout to find out which wire color is what)

Get some tape, tesa or duct tape and tape over all the pins but 2 and 3. Place the 5V wire of the charging cable on Pin 2 and secure it with tape, then do the same with the Ground cable.

If the cable is relatively thin you should be able to slide over the back cover.
Now just plug it into a normal phone charger and it should charge perfectly!

I’d write a more detailed instruction with pictures, but I’m authoring this post on my phone right now. This solution should be lots better than using an universal phone battery charger, since you can use the phone while charging. It also gives me the idea of building myself a wireless charging module in the future.

@urs_lesse The FP1 doesn’t have a back connector with pogo pins.

Oh right, forgot to state that. Added an info into the thread title!

This is very promising. I don’t know if Fairphone is planning some wireless charger.
(I find it disturbing to have to charge my smart-phone daily with a plug)
Then I saw this at Ikea http://www.ikea.com/be/nl/catalog/products/10314000/
And this at Adafruit https://www.adafruit.com/products/1407
It is quite thick, but it would be sufficient to connect the two wires with the rear connector.

A simpler solution would be https://www.adafruit.com/products/2114

Like I said I don’t know if Fairphone is planning a wireless charger but it would be a great enhancement otherwise we have to build it ourselves.

@Framb00s -> its working very well: http://www.schaeferweltweit.de/fairphone-2-kabellos-laden/ (sorry i wrote it in German)
But hey the better way would be if Fairphone produce Accu with the charging reciver inside! It would be easy but a huge substantial progress.

hey @sww, i tried the same solution as you described in your blog several months ago, unfortunately my phone got very hot during charging over Qi. i dont wanted to stress the battery and the rest, so i now still charge conventionally. how about your solution, any problems with high temperatures? which charger are you using?

i agree that there should be a cover for wireless charging, since there are already pins integrated in the back of the phone! but FP should also think about adding some heat spreaders then

Tnx for the reply, the translation of your blog from German 2 Dutch with googletranslate was horrible anyway with the pictures I understood what you were saying.

I ordered a similar solution and give feedback after I received and tested it.

Well sometimes (i think the angle cause it) the FP2 gets warm (not hot) since this i watch out to lay it on the pad in the same angle and it works very well. I think this is because the chargingpad has only a small area where it works. When the Phone hay a angle that allows only a partial transfer of the energy the reciever gets warm. Try to check this out by moving your phone and then see where it is loading the best way (centered) end then check if the temperature is changing.

Also possible that your charger has a higher loading Voltage than mine.

Instead of allocating the USB port all the time with the QI pad I’d rather connect it to the GPIO pins directly.

Anyone got an idea if this implies any not too obvious risks for the circutry? Is there some protection (diode or the like) on the USB-port that’s not available on the GPIO port?

Well as i said … the reciever is not bigger than the accu - the best and easy would be when Fariphone puts this Reciver direktly on the accus and connect it with the contacts of the accu. This would be a easy cheap but awesome update… and Anybody that wouldn´t use it could use the accu in the old way too.

I bought a Qi charger from Tasumato at Aliexpress for less then 5$ it works but sometimes it gets quite hot. It is the electronics that gets hot. It looks like the angle how you put on the chargerpad makes a difference. Anyway I’m charging again with the cable and would prefer Fairphone to get us a viable solution for wireless charging.

does anyone have an idea how to connect to the Pogo pins without ducktape? then i would prefer the following receiver model: 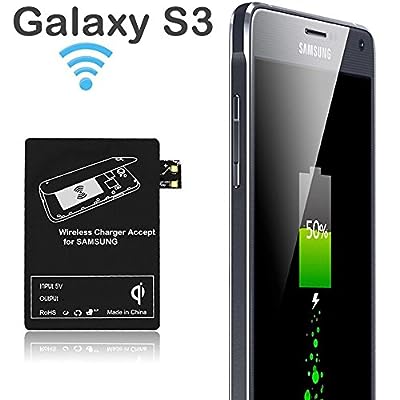 after getting this connect it to the pogo pins and everything is fine, isn´t it?

@z3ntu might give you more details about what’s possible with the back connector. He has been fiddling around with it lately.

thanks for the hint,

Some docs I know about more technical details is available here.

True, true. Just taping them onto there is more of a dirty temporary solution I used then. In the future I’d rather design a piece of PCB that fits onto the pogo pins, making sure there will be no shorts.
Then again, the pins are protected with a diode to make sure not to damage anything when a shortcircuit occurs.

Once I have my 3D printer and a useable PCB etching station I’ll tinker around with a more permanent solution.