This effort was based on the unofficial LineageOS ROM with major contributions by @Max_S, @k4y0z, @sooorajjj, and others. After several months of review by LineageOS and iterative cleanup of our work we were admitted into the list of officially supported devices. The currently supported version is LineageOS 17.1.

This topic will collect user feedback, helpful hints, feature wishes and future milestones such as Android 11. To post bug reports, please use the official LineageOS site.

69 Likes
:pencil2: Operating Systems for Fairphones
Feedback from usage of LineageOS on Fairphone 3+
[ROM][UNOFFICIAL] LineageOS 16.0 for FP3
Used to the Fairphone 2? Don't do these Fairphone 2 things on the Fairphone 3!
How to listen to music from SD card?
frank-bxl November 13, 2020, 12:01pm #2

Congratulations on the success of your work!

Congratulations and thank you for your work!
I’d like to test it but the download page seems to be missing. When will it be available?

From my understanding, last build failed on download.lineageos.org. I think it’s a building agent issue and @dk1978 is working on a patch.

In the meantime, the microG build suceed and it’s available here : https://lineage.microg.org/.

Some peoples tested it and it seems to work fine (see the unofficial ROM topic), I’ll personally give it a try today

I think it’s a building agent issue and @dk1978 is working on a patch.

To make it clear, the problem with the build was our bug, but it should be fixed as of today. The next official LineageOS build should be ready by Tuesday if all goes well. We are on a weekly schedule for 16.0.

Congratulations. I’m looking forward for LOS17.1 and support for the FP3+. Then I would switch to LOS.

First of all, thank you to all people concerned!

Sure, micro-g suggestions are welcome. I use it as well.

Do you have to unlock the bootloader and install recovery in order to install still?

First thing : Congrats to the team ! I am glad to finally have official-ish (microG) version of lineageOS on my fp3 ! Thanks a lot for giving me a good alternative to /e/OS, or worse, android :p.

Second thing : I have trouble with location with the microG version. Do I report the bugs here ? I just want to be sure not to pollute the thread. If yes, I have raised this issue on an app that cannot locate me, wheter I set my location to “High accuracy”, “Battery saving” or “Device only”. I tested 5 apps in total with odd results.
EDIT : I feel dumb for only getting now that mapfel’s previous message’s “but reports” means “bug reports”.

I guess that even if we are already on LOS, we need to fa actory-reset, right?

Not necessarily. I did a dirty install of the microG LOS (over the unofficial microG version) and it worked entirely without data loss (only had to reinstall Magsik).

I followed the instructions under “dirty install” from here: https://lineage.microg.org/

Don’t know if it helps but I used booted TWRP (without installing) to first install the the migration ZIP and the sideload the ROM. I would strongly recomend creating a backup first though, in case something goes wrong.

Should we be on a specific version of vendor/boot or other image?

Fantastic, kudos to everyone involved in bringing LineageOS to FP3!

I have installed the MicroG version. It was quite complicated to me, due to my inexperience with some steps and because I started by following the Lineage installation instructions which cannot still be followed. I reproduce here the main problems I had so it may be useful for others in a similar situation.

And that’s all, everything worked after that.

Edit: Making clear that TWRP method is simpler at the moment and I followed unnecessary steps.

Is it possible to relock the phone after installing LineageOS?

I know that generally is not recommended, but since Fairphone 3 comes with secure boot disabled [1], it probably does not care about verifying the installed ROM, even if locked - see [2].

Why still lock the bootloader then? Well, it does seem to increase security a bit, as a not-too-sophisticated attacker would not be able to load a new ROM without wiping all user data.

I read yesterday some threads in the forum reporting problems when locking not default ROMs. Probably you can find there some answers.

Awesome, congratulations to @dk1978 and all the other contributors 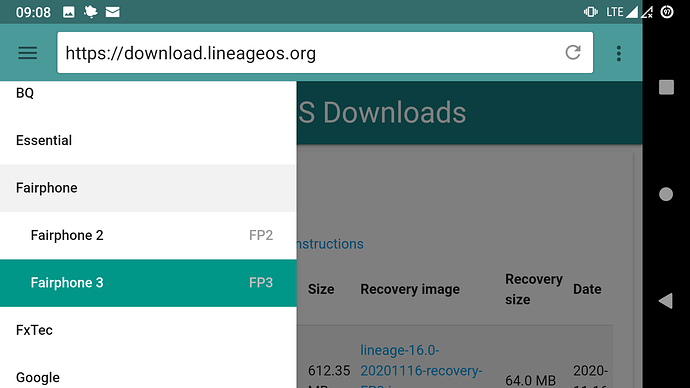 Does this rom fix some problems with the default system, for example the “too high minimum britghness” described here ? Lowest brightness is too bright