Firstly, my sincere thanks to all FP3 contributors for there hard work on bringing LOS and other custom ROMs to FP3/3+.

It has just been a week since I switched from FP2 to FP3. Was very happy to know that @dk1978 and others have worked so hard to get LOS official on our device. The description in this and this was my real motivation to proceed further.

I started working on LOS 18.1 for FP3/FP3+ by keeping xiaomi’s sdm632 common tree as reference which did not help much. Finally, yesterday I was able to succeed with a working build.

2 screenshots of the build: 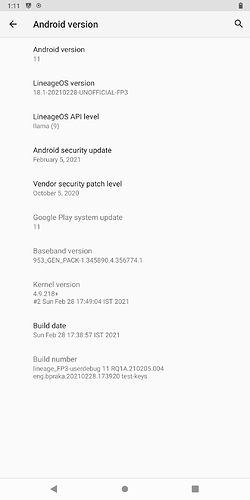 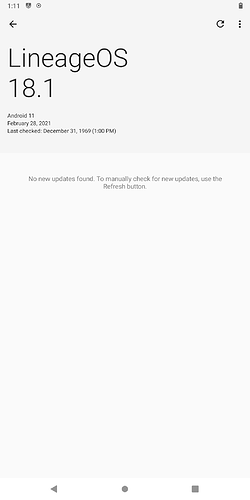 A summary on what’s working, what’s tested and what’s not:

If users can test and report more then we can edit this list later.

Updated link as of May 20th: AFH link

@dk1978 I have changes ready for review if you can permit me to upload.
This is the first build and I am very happy that we are able to get so much on the first build it self.
Really looking forward to all your feedback and suggestions.

Thanks for the new badge too.

So, anybody tried the build? If yes, request to please post your feedback and suggestions.

So, I tried out your build today, especially around the bulletpoints under “Not tested”.

NFC:
Appears to not be working. from adb logcat i see the same set of messages repeated every second:

Calls:
Made calls to and from a landline, worked; got audio on both ends, on both tries. considering that as working on my end

Media Playback:
Audio: Streamed via Tidal, worked without a hitch.
Local files from SD card worked as well.
Video: Couldn’t fully test; if streamed via a Browser they seem to work tho.

Hope this can be of any help.If you want me to test more stuff, tell me

For sure this result from you will help us when we prepare for official 18.1 release.
@dk1978 , for your reference.

Also, can you confirm if the display issue(screen is too small) is observed from your end too?

Yup. The Screensize indeed appears to be extremely small.

And can you confirm if night light and other display features are working or not?

Nightlight:
Nope, looking into the logcat again, I’m getting this set of error messages spammed in there whenever I enable this setting:

LiveDisplay: Not Working, can’t seem to find a error message specifically related to it in my logs.

Lockscreen settings: All seem to work.

Another workaround for The Screen size I found to Work better for me was to Go into Developer Options -> Drawing -> Set smallest width to 427 dp. (FP3/3+'s Display pixel density, which is smaller than The Default setting for The “largest” Option, which Sets it to 608 dp)
Else nothing new found currently.

Hey, I did a quick test and the ROM is working great.

I am willing to create v2 with NFC fix(and scaling if I get some pointers) if users are willing to use it as a daily driver.

I would like to test the Rom as a daily driver but there is one problem. The performance of the FP3 is very choppy on the default battery-profile (on every Rom I tested), changing it to the high performance profile always solved this issue. However in this Rom the slider in the battery-settings is missing. Can I do anything about this?

Could you send a screenshot describing this problem so that I can understand better?

For your second question I think @dk1978 will be the right person to answer.

Could you send a screenshot describing this problem so that I can understand better?

The first Screenshot is from the FP3, you can see the slider is missing. 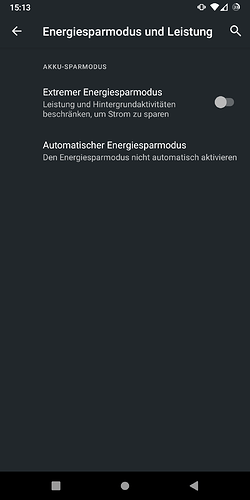 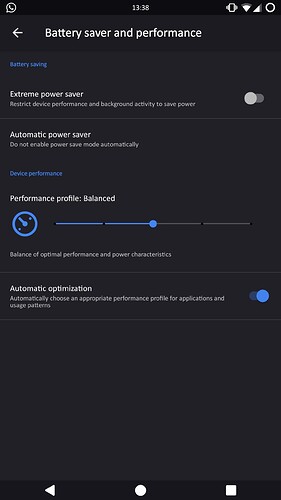 @TeamB58’s work on 18.1 is in the review pipeline for the official LineageOS FP3 build. Since LOS 18.1 will probably not go official until April/May 2021 I am focussing on fixing remaining issues on 17.1 at the moment.

I’ve been using the ROM as a daily driver since I flashed it (about a day before I sent my first message here).

@TeamB58’s work on 18.1 is in the review pipeline for the official LineageOS FP3 build.

Aight, thank you for the clarification and the estimation as well

If users can test and report more then we can edit this list later.

Things I found that are not yet working are:

I’ll keep using it as a daily driver and keep reporting, if I can do more to support development, please let me know.

Look in the OP in the Whats working-list.

I am focussing on fixing remaining issues on 17.1 at the moment.

Joining the team for this.

Yes, it worked for me.

NFC is easy. I have fixed it in my local build. For display scaling I still haven’t been able to fix it.

I remember having this option on LOS 17.1 on the FP2 some time ago before it disappeared (never quite understood why), and I think this option also is here on /e/.

I can’t really say that. Where do you see this the most?

The second screenshot is from a random phone from the Internet, but I know for a fact it was on the FP3 on almost all roms I tested. All have been Android 10 based: LOS, /e/, FPOS, RR (GSI) & AOSP (GSI). And it was working on all of them, the screen becomes REALLY responsive and smooth if you put it to the max and also games stopped having microstutters. The only workaround I found was to change cpu governor to “performance” but it drains the battery and improves the responsiveness of the screen only very slightly, however it removes the microstutters.

Like @Alex.A said, I mean the issue from the screenshot, I just wanted to have a complete list of the issues I discovered for convenience, but I guess I instead caused more confusion

There is an option, it says if enabled, you can swipe your fingerprint sensor to bring up your notifications. But if enabled it does nothing if you swipe it. But I guess if it is true what @Alex.A is saying, the hardware is not capable, so I guess this option should get removed/hidden instead.

NFC is easy. I have fixed it in my local build.

Hell yeah! Thanks for all your efforts!

I can’t really say that. Where do you see this the most?

For example if I have a homescreen full of icons and I swipe up the appdrawer, the stuttering is insane. When I type a text, some key-“presses” don’t get registered at all, I guess it is because of something like a low pollingrate of the touchscreen? Scrolling through youtubes feed is also stuttering like crazy. As soon as I set it to high performance, everything I mentioned is not there anymore, the phone feels really really smooth. Out of a sudden I can type text twice as fast, I am better in games, ect. An easy way to test the difference is the game Stack from Ketchapp. It is stuttering and unplayable on the default settings, change the settings and it is just sooooooo smooth.

Well, not for me… I tried both, really no problems.
I tried a screen recording, but I don’t know whether that’s really representative… I could make that available, as a reference