I just got my Fairphone an hour ago

And for the Purpouse of making Cases and other Stuff for it, I made a 3D Dummy

Keep in mind, I handmeasured it with my Mitutoyo Absolut, but it should be fitting within ~0,1mm
I’m not sure if I’m allowed to Upload a Zip file U_u
For now I Dropped it at Thingiverse

If you want to make your own case …
Wait a bit, there are some mistakes in my measurements 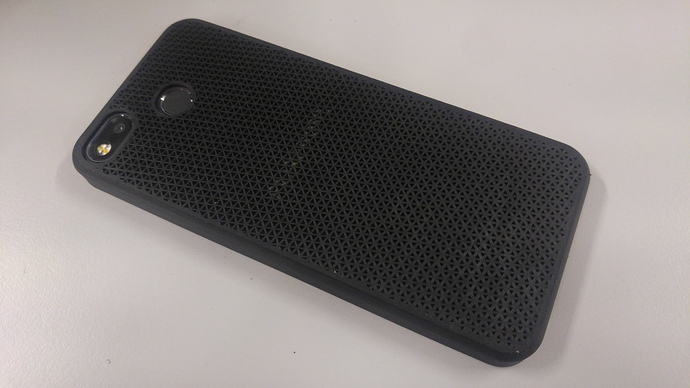 Well done! That looks awesome.
It would be most awesome if there were an open spot around the Fairphone logo as it is like around the camera and the fingerprint sensor.
There is no reason to hide having a Fairphone. What do you think?

Oh … Right O_o
I didn’t think about that

[EDIT]
The Font is Wrong but the Dimensions should be alright 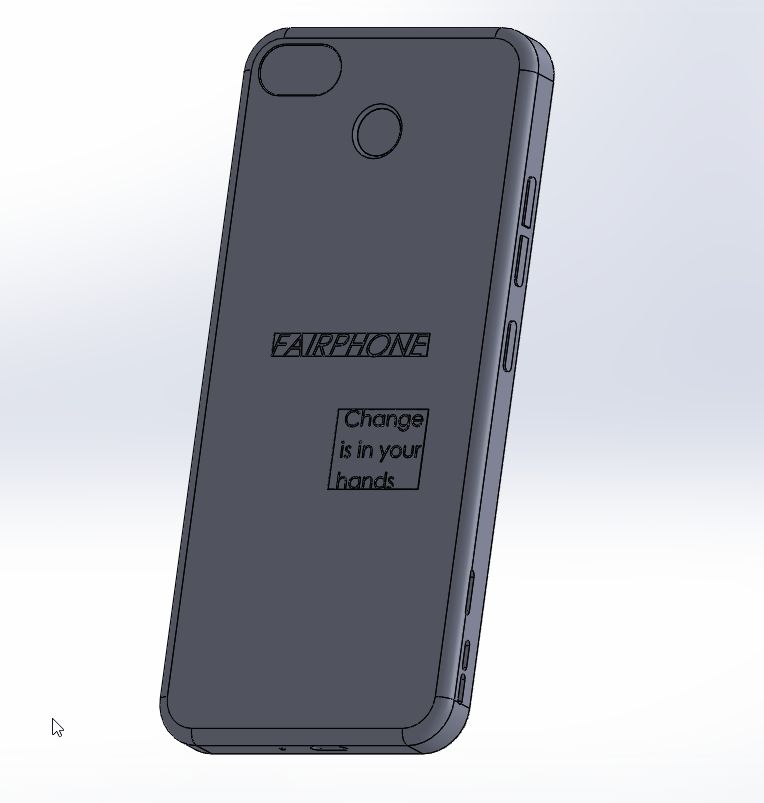 This looks great, really nice idea! 3D printing is something that still haven’t had a chance to get into, but sure looks promising… pardon my ignorance in this topic, but may I ask what ‘other stuff’ are you planning to do? Maybe a back support for the case to watch videos, or some sort of ‘hook’ for a securing wrist band or something?

I think I’d only leave the FAIRPHONE lettering free (not the slogan on the battery), but perhaps add 1-2 mm around the opening and give it rounded corners.

By the way, I love the “net” structure on the back, great approach to keep the transparency look

So, done with Iteration 3

The cutout for the “Fairphone” Lettering is just as high but 2 mm left and right. 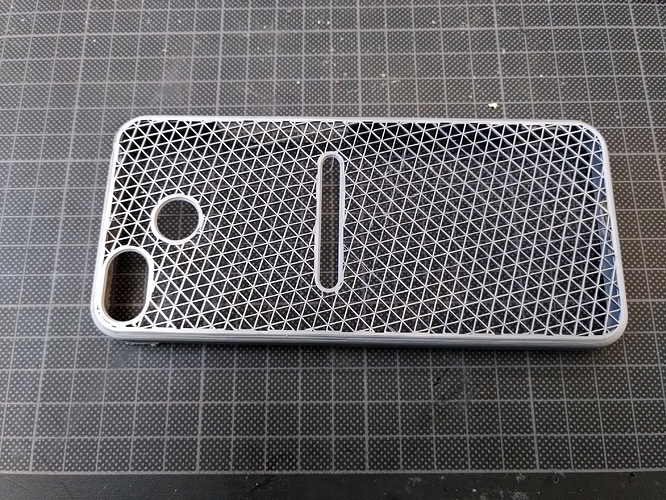 I’ll try to add a Kickstand to my Case somehow, but I don’t have any solide Plans for that by now.
The Future Projects are:
a Car cradle to attach my Fairphone
Tripod/“Gopro Style” Mount

Looks great, almost as if it was metal.

Tonight yes, I don’t have a dedicated Camera and just the Fairphone

But I ask a Friend to take the Picture

Hi!!! I ran into this post after searching all over for a case that would fit the fairphone 3. I love your designs and I would like to try to design my own case and print it!

I have never do anything related to 3D printing, can you tell me which software did you use to design the case? what’s the best way to get accurate measurements of the phone? … Also I was checking your dummy, is it possible to modify it (like a different pattern of the net, etc.)
Thanks a lot!
And Merry Christmas!
Ximena

Hey ho,
The dummy is drawn in a commercial CAD program I have available through work, it’s called Solidworks.

So I made a 1mm skin all around and than did a cutout for the front.

The open pattern on the back is just playing around with the ‘infill’ setting of the slicer software.
No Top/Bottom layer and the infill pattern/percentage you like… Done

At the moment I have a… 30? 25?% honeycomb/star pattern, but it’s a bit to much… More holes=more gripp in your hands

So far I can only see renders/pictures of your case design on the back of the phone. I wonder if your case overlaps on the front side of the phone (like the default FP3 bumper does)? If yes, you must have been using an elastic material, right? I am asking based on the assumption that your design is a one-piece case. 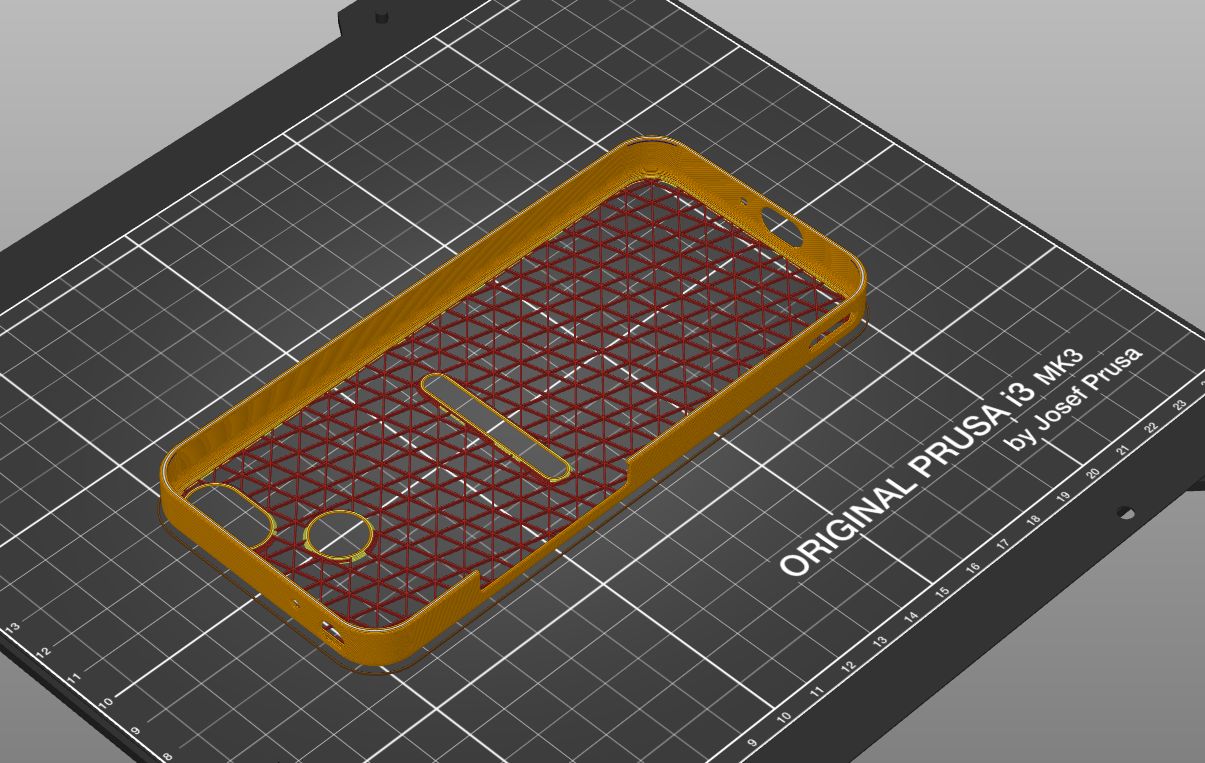 I’m finally satisfied with the result

The Print is running for the moment, so you’ll get some assembled Pictures in ~an Hour or so
For now, the Render from my Slicer and the link to my Thingiverse Article.

@urs_lesse
The Case is protruding in the Front ~1mm above the Display.
So if you drop it perfectly perpendicular to a flat surface the Brim of the Case will first.
But in Theory I could just extend the STL as long as I want.
I could print one with a 10mm “Privacy Shield” XD

The Print is PLA non flexible (Nightglow) for now, my Prusa MK3 is really precise calibrated so it’s a literal Snap fit

I'm finally happy with the look and feel of my Fairphone 3 Bumper I printed it in Nightglow Green, in the Orientation of the File. Two important Notes If you want the "see through" look you have to set the Top/Bottom Layer to Zero Your Printer has to...

Yesterday evening I took some Photos at last 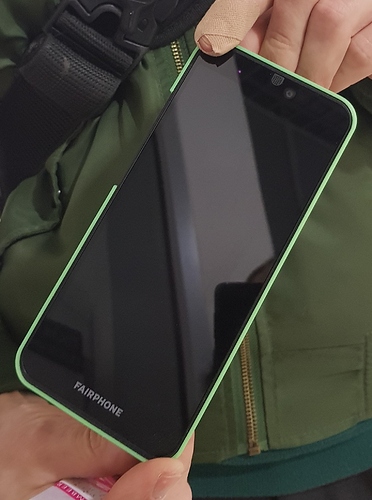 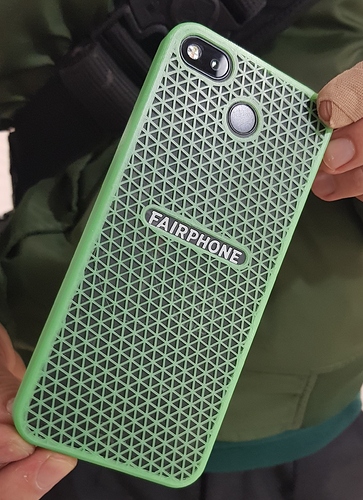 And this is how the previous Version looked like at night

Umm … on a second thought: Does it glow in the dark like some clock faces in old times? Is that healthy?

I know what you have in mind.
The old Style Watch dials and hands have Tritium/Radium Paint. But handling ‘Open Radioactive materials’ is illegal since '93 with a transition time of 5 years if you previously worked with this stuff, you could use the leftovers until '98.

Nowadays they use ‘Luminova’ some Phosphorescence Material, most Filaments use zinc sulfide vs. strontium aluminate.
So the Filament is neigther Toxic nor Radioactive
To get the Nightglow effect you have to “Charge” the Material with UV Light.
If you leave your Phone in your Pocket for 2 Days it won’t glow, but daily use is more than enough to have it glow all night

Hi Tig3rch3n - have been linked to this post as have just bought a FP3 and desperately need a coloured cover, I always lose black things! Are you in a position to market what you’re developing? As no way could/would I make such a thing myself! Thanks.

Depends on where you’re from

Central Europe would be ok for me

You can upload the STL file from my Thingiverse entry to one of those printing services like 3D Hub and have a look who is closest by your Area.
Or some Public Librarys/Makerspaces offer the same service.

Thank you! I’m in the UK, if that’s close enough?

I don’t understand the world of how these things are made, should you be able to advise me in simpler language(!

) how to locate others, if I am too far away? Thanks again.