Hi, I received the new slim case this weekend and immediately applied it to my FP2. It all fits well and makes the phone more appealing and remarkably thinner but later in the afternoon the phone went suddenly into a reboot with all apps checked and installed again (like with an OS update, black screen etc.). After a few minutes the phone comes back to normal but this happened the last days a couple of times, every time without a proper warning or clear reason why it did so.

Anybody experiencing the same problem after putting on the new slim case? Or is this a coincidence that has nothing to do with the slim case? If the problem keeps appearing I will reach out to customer support off course and let you people know what comes out of that.

Or is this a coincidence that has nothing to do with the slim case?

I’ll leave this topic open for a while to see if others can confirm a connection to the slim case.

Do you still have a working regular case? Could you use it for a day or so to see if the reboots still happen?

Hi, I have exactly the same problem. I was going to contact the support today and just wanted to check here first if I am really the only one with this problem. I’m glad I’m not.

I received my case (Turquoise) last week and when I put it on, the phone instantly rebooted. It took about half an hour until all apps where checked. The phone also got very hot.

I also have the feeling that apps were opened when the new case was on - even when I did not touch the phone at all. I tried to find out if one of the buttons was causing the problem and removed one by one. I also tried a battery reset several times. But when my phone is in the regular case everything is fine. As soon as I put the new slim case one, the phone behaves very strange. It gets hot, it reboots, it doesn’t work properly.

I came tot the conclusion that the case must be a bit too tight.

Could you try the workaround for a loosely fitting battery?

Just tried it. It seems to work.

The phone starts with normal speed. It gets a bit warm but not as hot as before.

A quick update. After applying the new slim case last Saturday I have experienced the reboot problem that same Saturday and the day after (Sunday). Yesterday (Monday) no reboot and today so far gone no reboot either. I have therefore not tried the loosely fitting battery workaround yet and hope the problem has solved itself however that might be idle hope.

@Susi_Schmid glad to hear your problem seems solved with the workaround.

Facing the same problem. Got my new slim case yesterday, as my “regular” case was broken. Yesterday the phone rebooted 5 times, after opening random apps (phone, WhatsApp, Instagram). Today it only happend once. This never happend before. The case fits well and it was easy to put on, so I don’t think that I’ve damaged something when changing cases.

Besides the rebooting issue I’m very happy with new slim case. It makes the phone less “bulcky” and is nicer to hold now.

Meanwhile, I also have a white slim case. I ordered it at a German retailer together with a new battery.

When I put the white one on for the first time this morning, the phone instantly rebooted again. This time, I realized that the power button of the case was stuck and kept pressing the power button of the device. The volume buttons also were hard to press. I put the upper part of the case off and on for several times until all buttons worked properly. Now the phone seems stable and hasn’t rebooted or shown any of the other problems.

Make photos and add them here!

Same problem here with the FP2 and new slim case!
Seems this is a new problem, is there a workaround?

I have the same problem with my koral red slim case. I try to put the case several times on and off. This works only for a short time. After some minutes the home button is blocked again and my fairphone restarts repeatedly till i remove the slimcase.

I am also experiencing reboot issues with the new slim cover. When pressing the power button I regularly manage to jam it and it does not release. The continuously pressed power button then causes the phone to reboot. Swapping the power button with the camera button (which I rarely/never use) resolves this issue for me.

Do you mean physically swapping the buttons in the case’s rim or re-programming the phone buttons?

More and more folks in our Facebook group are reporting the jammed power button issue with the new slim cases and I’m wondering if anyone has found a method to avoid these jams.

I have a slim case since one week and I don’t experience the reboots. All Buttons are functioning perfect.

I only have one problem: the white case is getting dirty immediately. That’s not ok.

I physically swapped both buttons. It took around two minutes and no tools were needed. 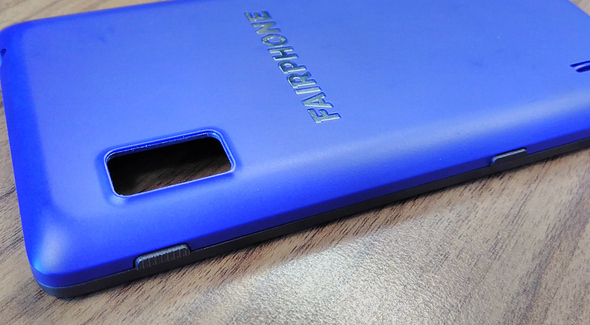 I have also swapped the buttons physically. The buttons did not jam again so far.

I followed this piece of advice and, as crazy as it might sound, the very long reboots and drop in battery are now gone. Only downside is that the camera button is almost unusable.

Same here. Two fairphones with new covers.
One calmed down after a few days and is quite stable since than. The other Phone was not usable with two SIMs and is a bit more stable with one (a reboot every few days). Had to try the paper battery thing

I received my coral red slim cover today and it looks absolutely fantastic!

Unfortunately I also have the issue that the power button gets stuck every now and then.
Subsequently the phone reboots if I can’t get it lose again fast enough.

Will try to swap camera and power button now.

Perhaps Fairphone should look into stocking extra (camera) buttons, maybe even include a spare one in each set. Shouldn’t be such a logistical and ecological nightmare and extra costs are probably near zilch.