I’ve been pretty excited about the camera upgrade for FP3. I got and installed the new modules today and did some before and after photos. And I have to say: I’m a bit disappointed. To the extend that I can’t really tell the difference.

They look so similar, that I’m worried I did something wrong, or there’s a problem with hardware and/or software.

Can someone please point out, from this example, how the new camera is any better? Or maybe post your own before/after photos that shows a clear difference?

The new is much lighter than the old. What did you expect?

The light in the room changed a bit between they were taken. And it also depends a lot on what the camera thinks is the most important thing in the photo and what the light is like in that part of the photo.

Here’s an equally dark photo with the new camera. 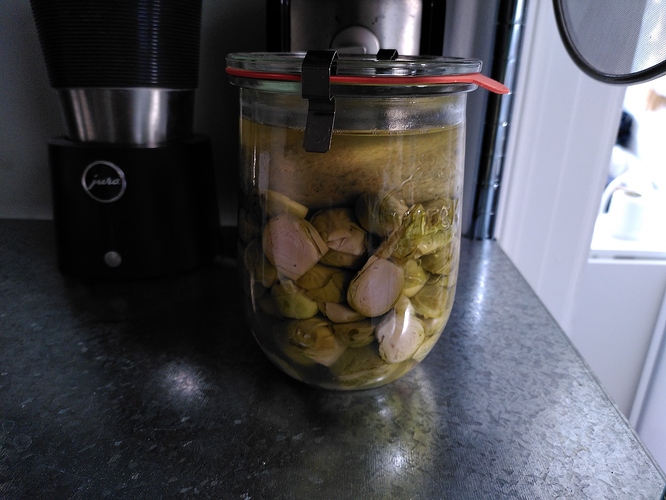 One thing I at least would expect is sharper images when zooming[1] in on the details. And in general, just “better” photos. Not something that looks so much the same that I can’t tell which is taken with what camera.

[1] Zooming in on the resulting photo, not the software zoom while taking the photo.

I don’t have a direct comparison, but I too don’t see a difference between the old and the new camera. With the stock camera app, there are exactly the same problems: lots of noise especially in low light conditions, oversharpened images. In addition, there’s now the “image not saved” bug, but I guess that’s independent of the camera module.

It seems to me that the stock camera app, particularly its image processing, is so subpar that a (maybe) marginally better sensor does not make any difference. The only area where there might be some improvement is zooming. Maybe the money for developing the new camera module would have been better spent improving the software?

So, unfortunately, a waste of money for me. I wouldn’t advise anybody who hasn’t ordered the new camera module yet to do so. Instead, use a GCam port, that does a lot more for image quality.

(The new front camera does seem noticeably better than the old one though.)

What is the result of the photo if you use another camera app like for instance Open Camera from F-Droid?

Well, such kind of photos are hardly any good for judging the camera quality.
To really see, if there is any difference:

This way both cameras have to face the same conditions/troubles and the motive allows for more distinct differntiation.
You can use other setups too of course; e.g. some things placed in different distances to check, if there is a difference, when you focus on the one in the middle.

Just try some pictures, that use the same conditions and allow for better judgment.
And you can try different apps for this as well of course.

I am extremely curious, to be honest.

I would also like to see a comparison under controlled conditions. It would have been nice if Fairphone themselves would have published something that they must surely have from their own testing of the new modules. On the other hand, I would have expected to see an obvious improvement without having to go to such lengths. The photos taken with the new module and the stock app are still a far cry (subjectively) even from my 4 year old Galaxy S7.

4x zoomed images are extremely pixelated with the new camera. It looks like the digital zoom does not take advantage of the supposedly higher 48 MP resolution of the sensor at all, but simply enlarges a section of the camera’s 12 MP output. I’m starting to get a little angry. This looks more and more like false advertising to me.

Zooming through the camera app or after once the photo is taken? If the latter, it’s logical.

Through the camera app of course.

The “48MP” sensor is quad bayer, so it is not 48 million RGB photosites. It is 48 million red OR green OR blue photosites. When the image is rasterised by the sensor, four red, green and blue photosites are composed into a single RGB pixel. This means two important things:

A lot of phone manufacturers use this marketing ploy.

Wow, thanks for the explanation!

Hi, maybe it’s possible to post some pictures on Instagram with #shotonfairphone? Maybe it’s a good Idea to see the quality of photos

Wow indeed. Thanks for the explanation. So what’s left of the “higher resolution” claim is essentially… nothing. Just a marketing ploy. Feel free to ridicule me for actually thinking that Fairphone was different and that such bullsh*t was beneath them.

There was never a shortage of detractors who’d tell me that Fairphone’s whole “sustainability” approach was just, well, a marketing ploy. I was always sure they were wrong. But now? Do I have any way of verifying their claims in this regard? And how does this approach square with selling upgrade modules using, let’s say, optimistic claims, that don’t seem to offer any real benefit? The line was that they give people a better camera module so they don’t buy a new phone just to take better pictures. Turns out the camera module isn’t better. So people still buy a new phone, but now there’s even more waste because of the unnecessary new camera modules. Great.

Or maybe I’m all wrong and there actually is a discernible improvement in photo quality. I’d still be happy to see somebody demonstrate this. But I’m very skeptical.

Then, although the explanation is very detailed and interesting, don’t forget it’s one article saying it’s more marketing than photo improvement. I found another one [1] that explains where the quality is really improved, and I think it will need advanced test to notice it. I think quad bayer improves the photos in bad conditions (low-light for example), and less in good conditions.
Apparently, there is also a 48MP mode available, so that you can have very high resolution photos, but it will only work well in good conditions. Could someone with the new module say if this option is available on FP3 (perhaps in developer options or something similar)?

[1] Can be found here: https://www.ubergizmo.com/articles/quad-bayer-camera-sensor/
See the conclusion of the article:

The idea of clustering sensor pixels isn’t completely new: ~10 years ago, Fujifilm announced such a concept in the form of the Fujifilm Super CCD EXR technology (wikipedia link), which at the same had a similar concept with clusters of two pixels (instead of today’s four). That technology had the same modes (HDR, binning) and required halving the resolution if dual-sensing was required.

It is important to understand that these sensors are not optimized to run at full-resolution (although they can), but mainly to extend the HDR capabilities of the camera. Fine details are possible -under specific conditions- but it wasn’t the primary goal when the technology was created.

Perhaps the biggest challenge is for the camera software to determine when exactly to use one of the specific sensor modes. This can be very difficult, and using the wrong mode at the wrong time could be counter-productive.

However, when used in the right scenario, Quad-Bayer should have a visible impact on the image quality.

I don’t remember any promises about the image stabilization being better, and my subjective impression is that it isn’t. I also expected better photos in bad conditions, but I don’t see an improvement (again, subjectively) with the new module in this regard either. Mind you, I’m not alone with this impression, and as more people get the new module I expect more will chime in.

Anyway. I hope somebody will make a more standardized comparison at some point and prove me wrong. I won’t do it, I don’t want to go through the trouble of swapping out the modules multiple times again.

and as more people get the new module I expect more will chime in.

Then, although the explanation is very detailed and interesting, don’t forget it’s one article saying it’s more marketing than photo improvement.

Your article seems to have come to the same Conclusion, quoted from the first linked:

Marketing departments really want you to believe you’re getting a Hasselblad-like image sensor, but the reality is that the Quad Bayer filter is just a clever (and effective) way of getting better-quality 12MP shots.

when uodalcrius wrote “the module isn’t better” he overstated the critique from the article.
In my opinion both say its better than 12MP with a regular filter, but its not what you expect from a true 48MP sensor.
The comparison to a 50MP Hasselblad 40000$, 80000$ (no limit?) sensor where each pixel has 10x 20x? the area is tough for every camera.
Its a welcome improvement if the software works, but is not “4 times as good” and even more software dependent.

I don’t know what you expected. Photo quality isn’t proportional to the MP. As said in another topic:

Trust me, no need for a confirmation. Also, you would want not want to store and handle 48 MP photos, believe me.

Smartphone photo quality is probably 80 percent software these days. So it is great and clearly a major improvement to have 4 physcial pixels available now to calculate each pixel in your photos.

I didn’t and don’t feel misled, but the number is bigger then the improvement and marketing likes that,
I just don’t think the article has judged it overly bad, but its not 40.000$ 48MP which is closer to getting proportional better.
Just wanted to step in and say I don’t think the linked article is negative towards the 48MP modules (across all vendors) but uodalricus has exaggerated the conclusion drawn in it.