Sorry, but where did I exaggerate? Calling the 48MP claim a “marketing ploy” were pcm’s words, not mine. But I think it’s quite apt, you have to use a very strange definition of “pixel” to justify this claim. And FP used this claim up and down, the “12 MP output” was in the fine print.

But I don’t really care about the number of pixels, I care about photo quality. Maybe I overlooked it, but I haven’t seen a single post from somebody who has the new module and actually sees an improvement. Have you? I don’t see an improvement, decibyte doesn’t, mgkoeln doesn’t.

Of course I don’t expect a tiny smartphone camera to rival the image quality of a Hasselblad, that’s patently absurd. What I did expect was the new module produces discernibly better images as FP said it would, meaning that the obvious flaws of the old camera + stock app (mainly excessive noise in low light) are at least reduced. As far as I can tell, that’s not the case. That’s all.

Ok, I’m done now. I might post some photos I took today so you can take a look and judge for yourself whether the results justify selling a new module, but arguing is pointless unless somebody actually makes a proper comparison.

This is exaggerated, technical it is better and should produce a better Image with the same resolution. I think we all agree that its not as some think 4x better.
alex21 said it even that its marketing and not real:

But despite that it should be better once the software works nice with it.

Of course I don’t expect a tiny smartphone camera to rival the image quality of a Hasselblad, that’s patently absurd

That point was to illustrate that the 48MP are Marketing and real 48MP cameras are a different animal.

I don’t think fairphone is to blame for that though.
Its a common theme in many industries, a Manufacturer sells a new product with specs that are not wrong but calculated different.
The manufacturer sells it, vendors market it and even if its more like 12MP+HD you have to sell it as the 48MP because everyone does it.
Thats the same with phones, cars, power tools and vacuums.

Maybe, just for information, I do post in this thread as well the homepage for the Samsung sensor. That’s all marketing of course, but as well a bit of technical explanation on what to expect and what not.


And a page with an animated graphic on the tetracell feature:

Its a welcome improvement if the software works, but is not “4 times as good” and even more software dependent

My experience with Fairphone is that software isn’t their number one priority and therefore not their number one strength. Just take a look at Android 10: it was only rolled out a few days before Pixel owners got Android 11 and there still are bugs like the alignment of the home screen icons. If I were you I would stay optimistic and reach out to Fairphone kindly asking them to finally invest a bit in software and just wait and see. For now, as others suggested, grab a copy of the gCam, that is what I am using for my “old” 12MP sensor too, and it’s noticably better, especially in bad conditions and at reducing hand-shaking blurriness.

I posted two pictures taken with the new module yesterday here. The first one was taken with the stock app. It was reduced down to 50% by the forum software, but the problems are still glaringly obvious (though more pronounced in the original image). Look at the noise around the chapel’s tower at the top of the image, for example. That’s the kind of thing I mean when I say that the new camera isn’t better, at least with the horrible stock app (which failed to save 2 of the 7 images I took with it yesterday, btw). With a gCam port the result is much better, but still not better than what I know the old module to be capable of.

Here is the rough comparison. I don’t know if the forum software did any changes.
(It is not the same time, not the same angle and the sun might be different.) 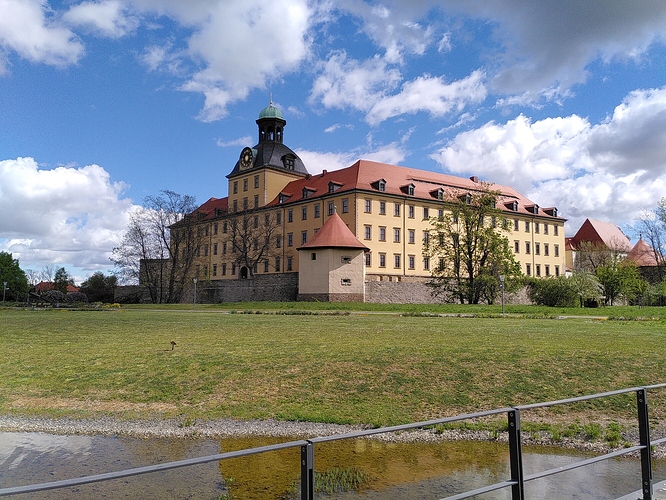 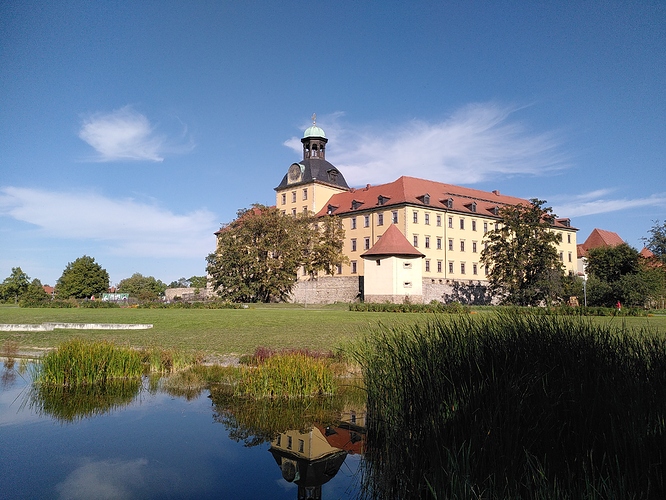 Thanks, chb. What do you think of the photo taken with the new camera? To me it looks like something the old camera would produce, like in my own photos. For example, there is lots of noise even in the brightly lit sky of you zoom in a bit, especially in the upper corners.

thank you for your comment. I think the photos look similar, but I am not very experienced in evaluating photo quality. But I noticed that the release speed is much faster with the new camera module.

But I noticed that the release speed is much faster with the new camera module.

That makes a comparison a bit complicated.

Don’t do that!
If you want to judge the quality, take the full resolution to do so.
Zooming in a bit means, that the software doing the zoomin is calculating what you get to see. Possibly - I really have no idea - this is even more complicated or results in more noise with the tetracell technology.

If you want to judge the quality, take the full resolution to do so.

That’s exactly what I meant, I should have been clearer, sorry. If you click the image the browser will show a scaled down version of the image, so you have to zoom in in order to get to full resolution. The problem is easily discernible at 100%, no need to zoom in beyond that.

You can thank the forum software for that. It shrinks photos above a certain file size (5MB?) down to, in my case, 50% size without warning. I’ll try losslessly cropping the upper half of the image and post this for a more direct comparison.

Edit: cropped version of the stock camera photo is here.

Edit 2: I just realized that you were of course talking about the images posted by chb. But the questionable comparison notwithstanding, don’t you think that the noise in the photo, clearly visible at 100%, is quite disappointing for the new module?

the forum software did the shrinking of the first photo from May 2020. Originally they are both 4000 x 3000.
I uploaded the photos again here:

I have to say I agree, the new camera photo does look better (though still quite bad IMO). But I’m not convinced this can’t simply be explained by the different lighting/weather conditions. There is obviously more light in the new picture; according to the EXIF data they were taken at the same aperture and ISO settings, but the exposure time is twice as long for the old picture.

I hope someone (with two FP3s?) will make a comparison not only using the stock camera, but also using a gCam port. I expect that the new module might have a slight edge over the old one with the stock app, but none with the gCam port. And hopefully FP will improve the photo app, not everybody wants to install a gCam port from questionable sources.

I uploaded some more Photos for comparison. All were done with OpenCamera.

Thanks, that’s great! If I look at somewhat similar images from the old and new cameras, they share the same type of problems, mainly overshapening and noise compounded by compression artifacts especially in the corners. The new camera does seem better, but I still find the improvement disappointingly small knowing what other, also much older, phones can do.

I like the second one of the two you chose. It shows the crappiness of phone camera’s hardware in general. Have a look at the (slightly) distorted lantern at the left and the (slightly) distorted shed at the right. I don’t use stock ROM (I use /e/), does the stock app rectify the perspective appropriately? If so, and if OpenCamera doesn’t (because it doesn’t know enough about the optics and sensor), I would still prefer Stock…

I didn’t expect I would defend the cameras here, but isn’t this just an effect of the small focal length that you will get with any small smartphone camera?

today I did some new photos (all with the new camera module) for comparison of the original Camera App (V2.0.002) and the OpenCamera App (V1.48.2) from F-Droid.

Wow! Thanks for the comparison photos!
I think OpenCamera has more noise than the stock camera actually. Otherwise quality is somewhat pretty much the same.

@chb
Could you do a comparison under bad conditions? Low-light, moving, etc…