Thanks for the reply…
I checked the settings in the app and in android … all on go!
I reinstalled the app but again no notification
(reinstallation worked for all other apps)
The strange thing is, that the microG GMS recongises the notification coming in, but they won’t get through.
Its like outlook app has a different way of using the GMS…

Thanks for your answer. Indeed, it is exactly the same issue.
As far as I have understood, the MicroG “fork” takes the original LineageOS-sources as starting point.
Is the bug tracker still valid for official LineagoOS? I am a little bit cinfused, I have to admit.
Cheers!

Yes, LOS for mG builds on top of LOS sources, and continuously* rebases its sources to get LOS security updates and fixes. Therefore, any bug or issue that isn’t specifically related to the microG integration belongs to LOS.

*= I don’t know the exact frecuency, but it seems to be daily by the wording on the webpage. Didn’t check myself, though.

Hi, i didnt use the GMS before but I activated to use register for signal and then kept it active for few apps (6) that uses it. However i have realized a higher battery usage and i can confirm somehow GMS tends to drain the battery. 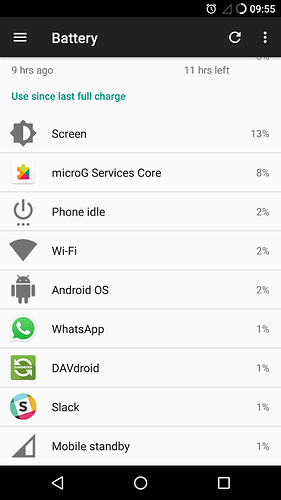 Google collects Android users' locations even when location services are...

Android phones are tracking your location even if you actively turn off location services, haven't used any apps, and haven't even inserted a carrier SIM card.

@chrmhoffmann if it can help you, can I provide any logs, kmsg, etc. ?

For bug 24 please look at the tracker and upload the requested files there.

Obviously mG is not affected.

For the ADB bug , have you Magisk installed? Then disable “Magisk Hide” option.

Good hint ! I don’t have magisk but iSu instead, and indeed in the settings there is “control the state of ADB”. Mystery solved, not a LOS bug

Maybe a little off-topic, but I haven’t found a better place for this:
I feel like I get huge lags on push messages from Signal since I am on LineageOS for microG with deactivated GCM. Does anybody experience this as well?

The time I used LOS without GCM, I just received push notifications, when the apps were active.
I think to activate GCM and reinstall the apps to register is recommended.

I have one exception … MS Outlook App still has issues with the push notes … still could not figure out why.
Cheers

The time I used LOS without GCM, I just received push notifications, when the apps were active.

Sure, for most apps that’s expeted behaviour. But Threema is configured to use polling and Signal is supposed to work without GCM by design.

I am thinking about changing to LOS+MicroG. I think I don’t really need GooglePlay and its services… But I have still some questions.

Hi LeonL,
in my experience, a lot of apps depending on GAPPS to work properly.
There are some apps I wanted to use and only could be found in the play store.
So, in my opinion microG is the best choice to be able to use all apps without having a googl account.

for 3. you can do the Dirt installation using the migration file that can be found here : https://download.lineage.microg.org/extra/7

I did the migration and everything is working. For memory this is what I did: - uninstall F-Droid (the microG apps were system apps already, so are wiped with /system) - reboot to TWRP and install migration zip. - wiped /system as advised by @roboe, and also wiped cache/dalvik just to be sure… - installed the build of LineageOS+MicroG for FP2

- reboot - self-checked MicroG settings, but everything was already well configured ! - no root access at the moment, I may reinstall th…

Warning: Don’t encrypt your device with Lineage microG fork! I have done it and bricked it, it is unusual now:
Device: Samsung Galaxy S5 (klte)
Software: Lineage microG 14.1.2 - 2017-12-13 klte
I did the encryption, the device started with the Lineage animation, asked for the password and started again with the animation for hours and doesn’t stop anymore. The only way to stop it is to take off the battery. I can boot into TWRP recovery, but only into the first screen, the following TWRP (version 3.2.1-0) menue dosn’t show up. I don’t see the device anymore - conected via USB - at the Windows explorer.
Do you have any advice how to get the phone running again or where I can search for help?

I do not think it has something to do with MicroG especially, see here:

According to the bug report, it happened on HTC and other Samsung phones, too.

Don’t encrypt your device with Lineage microG fork! I have done it and bricked the phone.

Hi,
I don’t know the reason for this encryption issue. At my FP2 I don’t have any problems with the official Lineage OS and encryption, and the FP2 hardware is quite similat to the one of this Galaxy phone and the software is very much the same as well. Would be interesting, to know, whether others run into similar problems with encrypting their FP2.
I have managed now to get the phone back to work, at least half the way. With the original firmware and the “odin”-tool I managed to get it running again on the Samsung Android software. The unsuspected surprise: When the system has booted, it asks me for the PIN code to decrypt the system. And it is not the one, I used at my encryption exercises. So in the moment I don’t know, how I can solve this problem. Probably the easiest way is to wipe the system and install a new Lineage OS. Hopefully the encryption is gone with that process.

Probably the easiest way is to wipe the system and install a new Lineage OS. Hopefully the encryption is gone with that process.

If it is similar to the Fairphone 2, you will have to explicitly format (not only wipe) the data partition to get rid of the encryption. TWRP can do that for you.

If things got really ugly, you perhaps need to destroy the LUKS header of userdata, too. Also via TWRP.