Keeps asking which launcher to use

Same issue as this one from last year but:

Select Nova if you have it

I have the same problem and this doesn’t seem to solve it. From the usage time statistics it seems Quickstep got installed and engaged at the beginning of the month, perhaps with the latest Android 11 update? 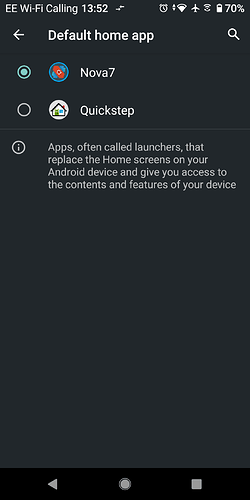 Unfortunately that didn’t make the launcher setting “stick”, either. The popup asks every couple of hours, so ends up asking half a dozen times per day, in addition to asking after every startup.

It is less frequent for me. Maybe once or twice a day. It was more frequent when I was using Nova. But it happens on restart every time.

Been using Nova a week after purchase and maybe asked once nearly two years ago, but not since ??

same here, except I have different launcher. Started to happen recently, over last week. Perhaps there was an Android update, but my memory is vague. Currently, the phone has Android 11, security update June 5, 2022.

Looking around I found this for Android 11, Pixel 4a keeps prompting default launcher when home button is pressed - Google Pixel Community

Could it be the same issue applies to Fairphone build?
The thread also suggests the launcher could miss some permissions, but I couldn’t identify any missing.

That is the latest update, and sure some default settings may have changed, finding them ??

But note the posts you refer to via the link are two years old though they do refer to a number of phones.

You may try disabling all your custom apps, one at a time to see if there is any change or do a safe mode start which disables all of them and then enable them one by one.

Sometimes 3rd-party apps can make your device unstable: your device might restart, freeze, crash, or become slower than usual. To identify if a 3rd-party app is causing you issues, you can use Safe...

It is notable that this is only reported on the FP3 A11 not the FP4 A11 so the issue does point to the an update somehow, though you may have had updates to the custom apps you are using to.

Had the same behaviour after updating the Android version. It wasn’t the first time though, and in an earlier version I had to set the standard-start-app first to Quickstep and then back to Lawnchair again. Important was to do it in the standard app settings, not by answering the choice of the standard-start-app. This time I had to repeat this procedure, switching back and forth between the launchers a few times and did some restarts between, now it seems to remember the launcher again.

Edit: Seems I celebrated too soon, every now and then the choice dialog still appears. Most of the time it is when closing an app (opening list of most recent apps).

Yes as mentioned that is the same one. Security updates do not necessarily coincide with OTA updates pushes

I haven’t been able to find a series of steps to fix this, even after trying various things. It would be nice if someone discovers a definitive procedure to get the setting to stick.

a definitive procedure to get the setting to stick.

That may be a problem as it could be different for different people. Have you tried a safe mode start etc.

Also remove the launcher and let the phone settle down for a week maybe?

I use Nova Launcher and I am usually happy with it. The phone now asks which launcher to use about 1-2 times a day. It seems like a bug in the default Quickstep launcher, which cannot be completely disabled as it seems. It did not happen right after the last system update.

Selecting “always” does not help.

If the hypothesis is a bug in the Android update or in Quickstep, I wonder where we should report this to Google (or Fairphone)?

I wonder where we should report this to Google (or Fairphone)?

To Fairphone in any case, you should #contactsupport. If ever it’s not their problem, they’ll tell you so or send that to the relevant service at Google.

This is not about the bug (since I use /e/) but did you try the KISS launcher? If you only need one screen with widgets then this is the perfect launcher. The search is working really well, so besides a few main favourites I can open all other apps via checkin the whole list or open them via the search function, where I can find everything on my phone (apps, contacts, etc.) just by writing two or three letters in the search box.

I have the same issue since a week or ten days, with Nova Launcher (paid version).

The phone asks me what launcher to use about three times after I reboot it. I usually reboot my phone Evey morning.

It started some time after I updated to the June security update.
My guess is this may be related to some (Google?!) app or service updated in background lately.