Unfortunately, this issue was already existing with the FP2 … Happened to me as well.

I, on the other hand, could no longer restore anything. As I turned it on, the phone didn’t work. Even removing the battery and turning it back on. Now I wait for Fp to show up. My wife went back to an Apple that lent her my big son. But she told me she can’t wait to get her FP back because at a meeting everyone asked her what kind of phone it was and she prepared herself after reading the FP website and she’s very proud of the choice.

I feel for you and really can understand, that you are loosing trust in FP.
Still, the FP2 and the FP3 can not be compared, as the FP2 (mine is working fine though) is flawed by design.

All of those points have changed designwise with the FP3.
As e.g. the display is fixed with 13 screws now, the troubles from loose contacts should not be a problem anymore.
This - of course and unfortunately - does not rule out defective displays or motherboards.

I really hope for you, that - all of you - get a new phone sone and that this is working as expected.

Eek! @bucketotrouble - it happened to me again today for the first time

I know, and thank you for the reminder!

I really love the FP3 when it is working as it should, which it has been for 10 days, no hint of an issue. It now started acting up again, so it looks like I will have to send it back after all and have a new one sent.

The same thing just happened to me a half hour ago. 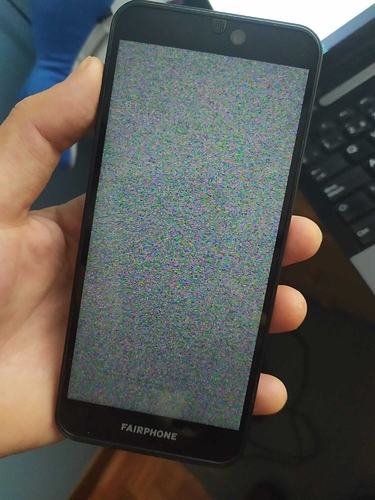 I’ve tried several forced restarts and it seemed to start, but it would get stuck in the Fairphone logo, or it would show the PIN entry screen and then get blocked, ending up showing the coloured pixel grid in the image. I finally unscrewed the display module and screwed it back on - now I turned it on and it works, but I don’t know how low will it lasts.

Luckily I have a very basic old mobile phone that still works, and an adapter for the SIM card that my sister happened to have. I’ll take it just in case. Again: I depend on chance or luck to have another mobile that works at home and a SIM adapter.

I am very sad to find out that the Fairphone 3 is not reliable, I will not be able to recommend it to anyone for whom the reliability of their mobile phone is important. I had had other audio problems (microphone and speaker not working randomly after connecting a headset) with my FP3, but they were solved by rebooting it. This problem is too serious to ignore

After disassemble/reassemble the screen, still pixels…
I was very disapponted because it very fell not strongly at all (already experienced a worst fall) and was about to buy a new screen (90€!).

But on the forum I saw that on FP2 similar screens can occure when the screen is not properly assemble. So I tried to twist my FP3 a bit in different ways to see if it can “reconnect” something… And it worked !!

The solution was when I twisted the two small sides in oposite way (one hand on each side in landscape view and turn left hand and right hand on opposite side).

Does anyone axperienced that ?
Hope it will last… I’ll let you know. 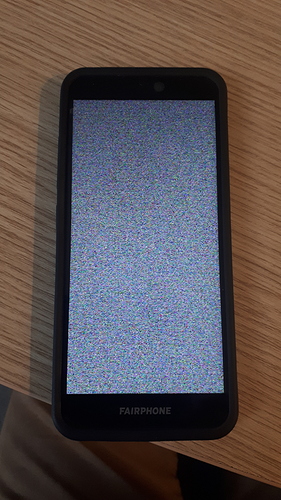 In fact similar could happen with the FP1 as well. I think it went by the name of “noisy colored pixels”.

I moved the posts of your topic here to keep sightings and possible solutions in one topic.

Hi. This is Jairo from Barcelona (Spain). I started to have the same screen’s pixels problems 5 days ago. Suddenly it seems so has been fixed, but I’m afraid it will not last. Keep in contact.

Finally the screen does not works. It started to show colored pixels some days ago and suddenly today the screen has switched off, so I cannot see what is happening. Now I’ve just extract the batery and put it in again and the screen it’s no workint at all. I have opened a ticket in the support team. Let’s see how much it take all the process

The same thing happened to me now. I got the noise on the display but nothing else happens. Sometimes after taking the battery out and leaving it for a while it seems to boot and the unlock screen for the SIM appears, but only half of it. the other half is blue or noisy. if the display deactivates after a while, the noise on full screen reappears after activating the screen again.

i was looking at some pictures in whatsapp and turned the screen to view the pictures full screen. while rotating there were already some glitches, then the screen freezed in mid rotation and later showed the noise pattern.

right now i’m really glad i did not send in my old phone to fairphone yet, because i have a backup. i did not expect that the new phone was so unreliable.

Hello everyone,
we had the same issue here yesterday, and after disassembling and reassembling the display according to the tutorial (https://www.youtube.com/watch?v=hG6OVPTnrK4), it works again. Maybe there was a problem with the contacts between frame and display?

Anyways, as good as an exchangeable display may be, this problem is very annoying.
Best regards
sg2world

Hi there,
Found this topic as I was looking for the problem I had… which is the one described in this topic.

Before finding this topic here I did try to disassembling and reassembling the display, but it did not work. Then I tried again after reading this topic. It still did not work until I read @Audouin_Leo 's comment. I tried twisting it a bit and got rid of the problem… but who knows until when?

@RuthiB and @ugo did you get any answer from the support? what did they tell you?
I got my FP3 since end of Nov, wondering if it is worth contacting the support?
I would like to know the true cause for this… is there a component that I need to replace?

In my case, the screen is still ok since the twist manip…

Oh gosh, so many new people on this thread. Looks like this problem might be more widespread than I thought (hoped?

It seems though that support still don’t know what it is or how to deal with it yet.

@theyaman - I just got my phone back from “repair” yesterday. They said they couldn’t find a problem, and figured the factory reset sorted it out. This morning it already showed signs of “noisy screen” (if I remember correctly that’s their term for the rainbow pixilated phenomenon) and a bit of delayed response by the display…
I am now waiting to hear back from support, regarding their next move.

I did try @Audouin_Leo twist thing though - still a very small sample size (ie - it can be pure coincidence at the mo), but it seems that for me it snaps the phone out of a patch of “bad behaviour” and then it is working fine, but only for a while (like an hour or so). If this little twist really does help, it is not very promising re the phone’s durability…

Hi there. I am back in the game. The display thing happened again today - also after the phone fell to the ground, but hours later and this had not happened the last time when the issue occurred.
As I was in contact with the customer support since the first occurrence the phone will now be sent back to the repair center.
For the moment reassembling the display helped, at least for the last 5 minutes. I will report back what happens the next few days until the return request arrives.

I have a theory for these problems (and some others)

Unlike most other phones on the market, Fairphones are meant to be disassembled easily. As this, contacts between components are “less solid” than in more integrated phones - where components are hard soldered together or using tight connectors.

In FP3 the motherboard is connected to the screen through a number of metal pads unto which springs press the counter-contacts. This, by design, is a setup that is vulnerable to having occasionally bad connections.

Over time the contacts will form a thin residue layer from dust that got into the device, moisture (not actual water but just the moisture that is normally in the air) and oxides that formed on the metal or on metal-metal interface. Some of this might already be there from manufacturing.

If then anything disturbs the contacts - for example the phone falling down, but just vibrations (getting a call), changes in temperature, or just normal handling, the contacts shift ever so slightly - from the spot where they had always been to a section of the pad that doesn’t conduct as well anymore.

Some of the time the spring force is enough to press the metal through the microscopic layer and create a good connection, but not always.

Some phone might have more residue, less spring force, or just bad luck, and you get outages like the screen or other periphery components failing.

This is the price to pay for a phone that can be disassembled without having to unsolder components.

But its also usually easily fixed, as the residue layer can be removed with the appropriate electronics cleaning materials.

In most cases, taking the components apart and scratching the contacts against each other slightly, so the pin heads scratch through the residue layer and get good contact again - or maybe cleaning the contacts with cleaning alcohol - is enough to fix the issue.

The contacts are definitely both the most likely and most easily self-fixable culprit for most electronics problem on the Fairphone. These issues now overwhelm support, and are likely the reason most manufacturers don’t make their phones repairable in the first place - soldered contacts don’t go bad. But at least in this case you usually CAN fix it yourself

Greetings to you all! (Just joined the community…)

I dropped my phone this morning, and although the screen has no visible damage, all I can see now are black and grey dots (see picture): 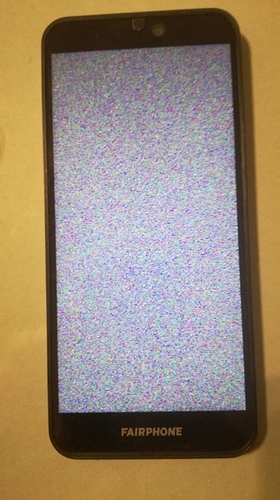 Does that mean the display is broken, or could it be another part?

Best regards and thank you in advance!
George

Greetings Bolotie, and welcome to the community!

I am not a FP3 owner yet but the distorted image on your phone reminds me of my display issues with my FP2, which ultimately ended up rendering it useless. It had to do with the display–>motherboard connection, and many others experienced the same degradation of the connection over time. My advice would be to disassemble your phone and reassemble it, making sure that every module is properly attached to the core unit.