I am experiencing a critical bug shortly after I updated to 1.5.1 the day before yesterday: After setting brightness to the minimal this afternoon, the display went completely black.

=> After reboot, the Fairphone logo appears as usual written in white over a black background.
=> But when the background turns blue, it is either half blue and black just below the white fairphone logo - or mainly blue but white below, then very shortly after, the display goes completely black.

I tried rebooting many times and still in different types of environment, light or dark.
I tried connecting the charger with no changes
I also tried to wipe partition data from the bootload with no changes

So I have absolutely no way to access the phone, even through adb since I cannot activate usb debugging

Does a long-press of the power button help? Not sure whether it is related to this (which was supposedly fixed):
https://forum.fairphone.com/t/black-screen-after-reboot-if-brightness-is-set-to-zero-or-adaptive-fixed-with-1-4-2-16-06/18752?u=johannes&source_topic_id=20212

Does a long-press of the power button help? Not sure whether it is related to this (which was supposedly fixed):

No, it does not help.
5s long-press does nothing, and 10s reboots the phone and the same occurs again and again

If there is something I can do from the bootloader, like sending an updated image through adb or sending you the logs, please let me know.

If there is something I can do from the bootloader, like sending an updated image through adb or sending you the logs, please let me know.

You could try installing the 1.5.1 update again from SD card (method 2 in the official guide). It should leave user data alone, as long as you skip the optional data wipe. Whether it resets the brightness settings I don’t know.

You could try installing the 1.5.1 update again from SD card (method 2 in the official guide). It should leave user data alone, as long as you skip the optional data wipe. Whether it resets the brightness settings I don’t know.

The SD card I normally use with my FP2 was not recognized so I reinstalled following method 3 from the official guide you mentioned 3. Load the update file from a computer.
And actually, yes it worked!!!

Good to hear that it works! I’ve marked your post as a solution so others can quickly find it.

Hi - just wanted to chip in, I also have a FP2 with 1.5.1 and also have this problem:
When I turn the brightness down to 1/3 or lower, the screen goes completely black. This is absolutely reproducible and happens every single time I do this.
I can reactivate the screen by blindly guessing where to turn the brightness up again (Two-finger notification area down and then swipe to the right…).
But this is really annoying since I cannot turn down the screen brightness reliably.
This happens with adaptive and non-adaptive brightness adjust, only with non-adaptive I can turn it down more (to 1/10) before it goes completely black…

Thank you for the tip, I’m feeling much better since I am not the only one

It’s actually much faster to resolve it with your solution but I’ll have to train a bit though …
Do you also have the problem of the screen going black during calls?

Very intetesting behaviour.
This does not occur on my FP2 with FP OS 1.5.1 and brightness at about 1/4 to 1/3 and adaptive brightness activated.
I had an issue at minimal brightness with 1.4.2 (there’s a separate thread for this), but not with my current setting.

Yes, I also have a problem with my screen staying black during calls.
I tried to readjust the proximity sensor but I get error messages.
It could be that my phone is not well centered (case/screen), but it came like this when I first got it (I am still in my first week of use). Still trying to figure that one out…
Perhaps the light sensor is also affected in some way?

It happened again last night and I had no phone for the rest of the night when I was supposed to meet with people.
I will contact the support again because this is the third problematic issue (proximity sensor, cover that’s falling apart and now the black screen).

One last thing that I would like to state here: As a former test manager on a part of the Galileo project (european gps), IMHO Fairphone has a Test problem. Some issues like this one occur after a new software release and it should not go undetected. Something is going wrong in the way you release the software and this is very problematic for us, I hope you can resolve it.

The Forum is a by the community for the community effort, so there’s very little Fairphone staff involvement here (none of the moderators are staff either). Be sure to include any messages to Fairphone in the support ticket if you want to be sure that they’re read by Fairphone staff.
By the way: some of the testing is also done by enthusiasts here in the community (see here). If you feel there are achievable improvements to the testing process, it may be interesting to have a discussion with the people running the testing programme (though I can’t speak for them - so I can’t promise they’re open to anything right now -, nor do I want to pressure you into anything).

And first, thank you for your message.

Yesterday morning, I sent to an email to Fairphone support, in reply to an email they sent me after opening a ticket (ticket number #118302) with this issue 2 weeks ago. I have not received any feedback yet.
I am now back to using my good old FP1.

Since, after updating my FP2 to 1.5.1, I rooted it -as always- with phh images, in order to exclude any rooting related problem, I could reinstall 1.5.1 then reproduce the problem when unrooted.

But I have been going through 3 problems now. Last week-end, while having dinner, a friend asked me what was happening to my phone since the cover was falling apart after just 6 months of normal use. He was considering buying a fairphone, and even though I tried finding excuses, a long-lasting phone whose cover falls apart after just 6 months of normal use is disapointing. Of course, the cover is replaceable but it’s from fairphone, and it has only been after 6 months!

I would love having at least an hour per week to dedicate to help testing but I don’t have that time right now. Actually, most of the time, I prefer waiting a bit before updating to make sure there are no big problems with the update because I have little time and need a working phone that don’t go suddenly black when I am out.
When I say that there is a test problem, that’s not an accusation, but a suggestion for improvements. Problems happen but it’s important to be aware of them. I am saying that because of the proximity sensor problem then of the black screen display problem, both were undetected before release and it’s important to understand why and what went wrong in the testing procedures.

Right, so actually after reinstalling 1.5.1, the bug does not occur anymore. So it is not test-related or fairphone-related, and I got angry a bit too early I guess.
Apparently, it only happens after rooting with phh image (available here https://superuser.phh.me/fairphone/fp2/ …)
Is there any way to contact phh directly to find-out what’s wrong?
I also tried with another image from http://siteactif.org/fp2/FP2-gms59-1.5.1-ota/ and the exact same occurs.

Apparently, it only happens after rooting with phh image (available here https://superuser.phh.me/fairphone/fp2/ …) Is there any way to contact phh directly to find-out what’s wrong?I also tried with another image from http://siteactif.org/fp2/FP2-gms59-1.5.1-ota/ and the exact same occurs.

it only happens after rooting with phh image

I honestly have no idea why the root.img does do this… I even have trouble to understand how it is possible.

Currently I am on OpenOS, so I can’t test. Can someone confirm this behavior:

Edit: actually this bug was already here: Brightness can be turned to zero with FPOS 1.3.6 and supposed to be fixed :-/

Apparently, it only happens after rooting with phh image (available here https://superuser.phh.me/fairphone/fp2/ …)

I realized that it takes phh usually a couple of weeks after a new FP OS is rlreased, until the boot.img is updated. For example, the current boot.img has the time stamp from Aug. 2nd.
Unfortunately he does not provide a version no. from which package the boot.img is extracted, so one needs to be careful that phh’s boot.img correlates to your actual FPOS version.
I also read earlier that the boot image may change with the OS versions and that some users ran into issues because of the boot image being from a different version than the FPOS version they run.

I usually always made the boot images myself (just takes a couple of minutes for the first set up, then it goes even quicker to create your own boot.img).

Thank you all for your messages.

@Spielmops I reinstalled the official 1.5.1 from http://storage.googleapis.com/fairphone-updates/FP2-gms59-1.5.1-ota.zip
I can confirm that before rooting the display problem does not appear.

@NicoM Yes, I was surprised too that the mere fact of rooting creates the problem

@freibadschwimmer I don’t think so because:

Then a couple of days later, the problem occurred (at the worst time, I was waiting for an important call and out from home).
Then, to resolve it, as stated in this thread, I reinstalled 1.5.1 then flashed again the same phh image.

Then on the 03/08/2016, it happened again (at the worst time of course again).
I reinstalled 1.5.1 again, but flashed another image from phh (since he updated it) boot-fairphone-fp2-su-eng-r224.img and again, I could reproduce the problem.

Reproducing the problem means:
=> Go to the display brightness setting
=> Bring the brightness to minimal (while keeping the finger on the screen to bring it up otherwise you’re into the black screen again)
=> If, when brightness is set to minimal, the screen is completely 100% black, the problem is reproduced

Then I decided to test @NicoM image and I could reproduce the problem again. 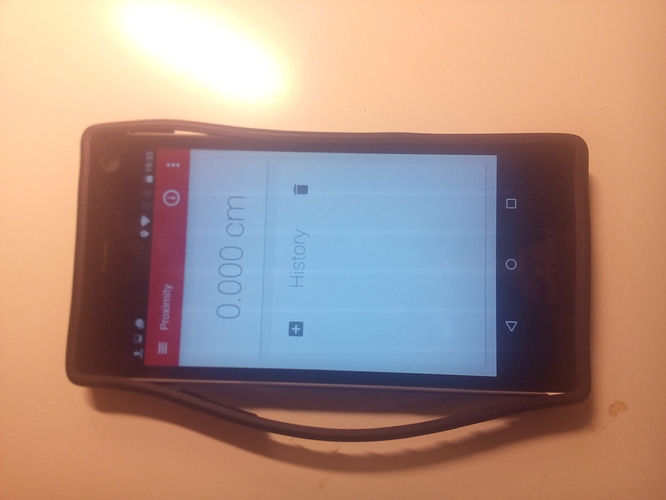