I guess I’m not the only one finding the LCD screen of the Fairphone 2 too bright in the dark, and I guess the one of the Fairphone 3 as well.
I have tried different things, of which different apps that would reduce the brightness on the screen. Though these apps would not be able to reduce the brightness of the status bar, quick settings and device settings, and if I wanted this I would need a paid app from the play store, which I wanted to avoid.

One day I was playing with the settings of my phone (FP2@LOS 17.1), I discovered you could balance the colours of the phone in the LiveDisplay option (well, I already knew, but I never found this useful). And I thought, if I reduce all colours, then it will reduce the whole display brightness. I tried and… it works, and this time everywhere on the screen! It doesn’t really reduce the screen brightness itself, but sets a darker overlay on the screen, but I believe I can’t have better.
So I now have a settings shortcut to here, and it takes me 10 seconds each time I want to reduce the minimum brightness. A bit longer than other methods, but good enough for me.

So I’m posting this here in case some other people hadn’t thought about it and actually find it useful (I haven’t found it anywhere else). AFAIK the LiveDisplay option is available on LineageOS based ROMs, I don’t know for the others.

I have the exact same issue on my FP2 with LOS15, and I found another solution. Somehwhere in an XDA thread I found an app called Brightness Tweak, which lets one actually decrease the screen brightness instead of just adding a dark filter.
There is a file somewhere that stores a value between 0 and 255 which defines the brightness of the screen. The slider in the status bar only manages to bring this value down to 10, but with Brightness Tweak one can set it to 1 (if one edits the file itself via a root file manager, they can also set the value to 0, which would turn off the display completely).

Since it was a bit of a hassle to get the actual apk, I’ve uploaded it here.

Quite interesting, thanks! I’ll have a look at it.
Though it requires root, which isn’t a problem for me but is for many others.

That’s right, yeah. I always forget that only a fraction of people own a rooted phone

The XPosed module GravityBox allows the user to set the minimum brightness crazy low. At its lowest it’s too dark for me to read comfortably, even in complete darkness - something to try, maybe. Also requires root, of course.

So I now have a settings shortcut to here, and it takes me 10 seconds each time I want to reduce the minimum brightness.

If you have root there is a way to do this via a script and use e.g. Termux and the Termux widget (both available in the F-Droid store) to execute the script via a tap on the widget (which takes only a fraction of a second).

This post describes the settings command and here is an example of a script for Termux.

This is how the widget looks on my FP2 (with different scripts for different color adjustment values): 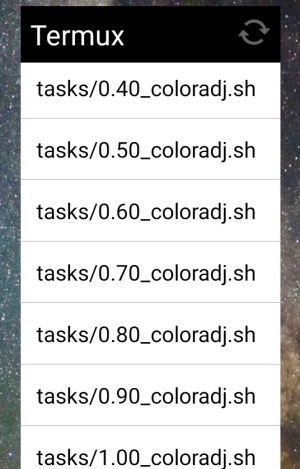 I’ve read somewhere that lowering the actual brightness below the normal threshold introduces a flickering. Is that true? Otherwise i think Fairphone should make an update that lowers the minimum display brightness… (because I can’t imagine anyone thinking a lower minimum brightness would be bad)

Didn’t wanna make a new thread and this is the closest topic to what I wanted to ask, hope you don’t mind me hijacking your thread

A discussion about OLED screens for FP4 was already seen here, it may be better to continue it down there than in this topic

Are there any plans to release an OLED display upgrade for the FP3?

Maybe, but very probably not.

Alternatively; any idea when FP4 is coming and if it’ll have an OLED display?

I think it won’t come before a year or two at least.
As to whether it will have an OLED or not, I believe so, because all recent phones have one. I doubt FP will still put an LCD on the FP4.

But if you want your voice to be heard by FP and to have official answers, please #contactsupport!

There is a file somewhere that stores a value between 0 and 255 which defines the brightness of the screen.

I found it on my FP2 running Lineage OS 17.1, thanks to this blog post
To find it, basically in any rooted shell:
find /sys/ -name *brightness

I now can set the brightness with this command (root needed of course)
echo "6" > /sys/devices/mdp.0/qcom,mdss_fb_primary.171/leds/lcd-backlight/brightness
(the value being anywhere from 0 to 255)

I’ve read somewhere that lowering the actual brightness below the normal threshold introduces a flickering. Is that true?

Well, it seems, yes: for any value from 1 to 5 the backlight flickers, making it unusable (or at the least unpleasant).
But then for 6 and above it works, and it’s still better compared to 10 previously.
I guess I’ll add a shortcut to this and in combination with color adjustments (thanks to @_Chris for all these instructions) I’ll be happy

If anybody has any info about if going under 10 could damage the backlight panel, of if there is a trick to get rid of this flickering for the lowest values (but I’m not expecting any miracle here, that’s hardware it seems) I’m of course interested

P.S. : it seems that putting the screen off, then back on, resets it to it’s default minimum of 10. No idea how to change this.

Does anybody know if there’s a bug filled against LineageOS to allow lower values for the minimum brightness for the FP2?