Just to let you know, we - the Fairphone Community - are now also on Mastodon (decentralized, open-source Micro-Blogging service, i.e. a Twitter alternative).

3 Toots, 4 Following, 2 Followers · This is a community account. Find official news at @Fairphone@social.weho.st

In the meantime I’ve set up https://crossposter.masto.donte.com.br/ so everything appears on both Twitter and Mastodon

Thank you for this. Will you also add a Mastodon link & icon under “connect” on https://www.fairphone.com/en/?

But it would make sense to add the official Mastodon account there: https://social.weho.st/@Fairphone

10 posts were split to a new topic: Fairphone on Peertube

In the meantime I’ve set up https://crossposter.masto.donte.com.br/ so everything appears on both Twitter and Mastodon

I don’t know how this works, but it seems to result in lots of nonsense posts on mastodon. Like this: 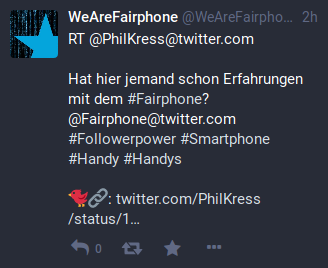 I don’t know if whatever is happening here makes sense on twitter, but on mastodon it looks like WeAreFairphone is asking if anyone has experience with the Fairphone.

RT means “retweet”. You basically forward someone else’s tweet to your followers.

Person A asks a question.
Person B thinks that their followers are likely to know an answer, so person B retweets.
Any of the followers of B can then answer.

Indeed such retweets make less sense across services. Because someone on Mastodon would also have to have a Twitter account in order to answer to the original tweet. Replying to the toot generated by the crossposter would not reach person A.

Does Twitter’s API not allow to forward toots to @someone@twitter.com? Hm… I have a feeling that it doesn’t. Twitter isn’t too famous for being open, right?

Maybe. I think it would make more sense to stop cross-posting retweets and boosts, maybe even replies too. Especially since you can hide boosts and replies from your mastodon home, but not if they come from another platform.

I still think it makes a lot of sense to crosspost retweets e.g. of other people’s event announcements. Or other important news (crowdinvestments, special offers, Android upgrades, etc.).
Doing those manually instead would mean I’d stop doing it.

I could try what happens when I delete crossposted retweets of someone asking about experience with Fairphone, i.e. if they get recreated again.

I’m new to Mastodon, i have followed both @Fairphone and @WeAreFairphone but only the official one is appearing in my feed.
Trying to add again @WeAreFairphone returns “You are already following this account”. I don’t get what i’m doing wrong. Any help?

Maybe you can ask the very same question on Mastodon. With luck, people from the same instance as you can try and see how it works for them.

Is that actually the “official account”? A year later it is still not listed in the “Connect” section at the very bottom right of fairphone.com.

Technically it’s a crossposter account, i.e. everything posted on twitter (except replies) is automatically posted there, too.

Maybe @Monica.Ciovica can ping the right people to get it it listed with the other social media accounts.

Hi Ingo, I will check with our developers to see when they can make the addition. We have been debating over the channel, as we use it mostly for sharing information and are not actively present - for the time being.
As such, having it listed on the website might be misleading. I’ll take it up with the team and get back to you 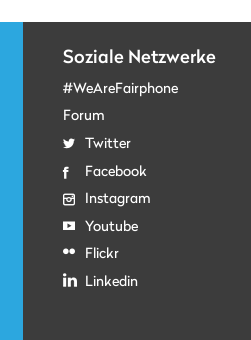 Is there any news?