Samsung 64GB SD-card not detected after every reboot

I had moved data to a Samsung 64 EVO+ yesterday morning and was no more able to access it in the evening. Putting it in the fridge I got it back and I could move data back on phone. Then the SD card stopped working again. Thanks @Patrick1 for the suggestion

It may look like a thermal issue but I do not have a clue how this may be caused. Once initialized on my phone it always worked until the next reboot which could have lasted several days. But then the annoyance began again until it was recognised.
So at last with a heavy heart I gave it to my girlfriends LG G4 where it performs reliable right from the start at any time.
Anyway I was very satisfied with its performance using a sd card reader (read/write ~ 90MB/s). FP2 didn´t max it out though I believe.
I had to step back to the Samsung Evo+ modell with same capacity which may match up better with FP2´s performance. But this one now simply stays available at any time. Not the cheapest solution unfortunately.

once initialized (after taking out of the fridge) my phone tells that the SD works, but after a wile I can not use it anymore with a file explorer, and I start to have problems also with file transfers. My idea is that since the SD card slot is near the processor, in an area of the phone that gets very hot, both SD card and read-out electronics of the phone have to work at high temperatures, with bigger electrical noise, so communication errors are more probable. I suppose that the card doesn’t work well, but the phone keeps it for good because it passed the communication tests on boot-up, and the test is not periodically repeated.
Reading the forum my idea is that some cards are better at working at higher temperatures and have more clear signal (Lexar has to be one of them, because it is tested to work with 1100 different devices). I’ll test a Toshiba exceria, that claims to work well up to 85°C, and should be more reliable then the Lexar, and if it works I’ll add it to the #Fully functional SD-cards list

Good thought indeed. Many cards are tested up to +85°. Hm, my phone usually keeps running from +20°C to about +40°C when charging. I don´t play games or use other high performing applications. Anyway even this temperatur range was somehow marginal with the first sd card. I am not sure if this is truely the cause. “ESP noise”, good point. Could also be a cause. I think while development FP were limited to their resources and had to make a cut at some point. E.g. all they had were some sd cards up to 64GB for testing as they have stated me when I asked them how come their sales page would only point out sd card capacities up to 64GB while several users here reported also cards working flawless up to 200GB.
ESP tests can turn out as very costly when having to revise the pcb layout, change components, manufacturing etc. over and over again.

I’ll test a Toshiba exceria, that claims to work well up to 85°C, and should be more reliable then the Lexar, and if it works I’ll add it to the #Fully functional SD-cards list

Very good. Not the usual choice of the majority.
I have not often read of Toshiba sd cards. Mainly only of their harddrives.

Could it be a problem of the SD-card’s body deforming with the heat just a wee bit, so it loses contact?
Btw. I am using even a 256 GB SanDisk without any problems. Would have loved to even test the 400 GB Version; but that was way too extensive, as I really don’t need it.

body deforming with the heat just a wee bit

Hm, yes this could also be a cause in some cases of contacting failure. This brings issues into my memory where heat deformation could even crack soldering joints (a very common cause of graphical corruption with PS3´s GPU chips).

And I do have realized that my sd card does not sit as tight in the slot as when I inserted it in the beginning. Taking it out and reinserting it again may bring this “wee bit” of deformation to carry.

I don’t know anything about ESP tests but I have some experience with EMC
tests and I know they cost a lot and that sometimes they require layout
changes to be passed, as you suggested.
I tried to reproduce the defect before changing SD card and these are my
findings:

So for me it could really be EMC noise that creates some read-write error
on the SD card.
I didn’t have this problem mounting my 64Gb Samsung EVO+ card as external
drive, but I tried it for only two days (I want a card that I can mount as
internal memory)

Yes, you are right, wrong abbreviation used sorry. Should had been ElectroMagneticSusceptability or Compatibility.

Your results sounds interesting. It takes quite some time and experience to fiddle out a specific EMC issue and if found to solve it too.
Many people here selected another brand or type of card to solve this.

But still I wonder specifically about Samsung cards as they are sold with the not so common attribute of being resistant against radiation (but maybe only related to radar radiation when passing the luggage check on travels). Furthermore I am wondering as it is already the previous “Evo+” type which I had to chose as replacement for my initial “Pro+” most recent type showing such troubles.
So this way the available list of compatible MicroSD cards here may turn out being only up to 99% reliable.

But this could show even worse. We started with Lollipop 5.1, only mounting card memory as external.
Now with Marshmallow and additional internal sd card memory mounted a broken or badly operating sd card could cause the system to entirely go corrupt. This though would generally keep me off mounting it as internal memory. But still there are good reasons for doing so.

No one can tell which data will be saved on the extended memory space as we can only see one block. Also algorithms are in place taking care of “wear leveling”.
There are phones available performing a quick test giving you a feedback if the card performs good enough and will be accepted. With FP2 we may only first test it as external storage and if all is good change it to internal. How much trouble will then come up will also depend on the used internal filesystem. Ext4 is journaling and may handle errors more tolerant than FATxx. But I expect things to completely go wrong as soon as system files are affected.

Furthermore I am wondering as it is already the previous “Evo+” type which I had to chose as replacement for my initial “Pro+” most recent type showing such troubles.

So this way the available list of compatible MicroSD cards here may turn out being only up to 99% reliable.

Actually I’m not the first to report problems with 64Gb Samsung EVO+ card, I’ve found it already in the list of not compatible SDs. Strange that 128Gb is compatible but 64Gb not, I don’t know if it is because you use 128Gb EVO+ card as external memory or because there is really a difference.
Toshiba exceria 64Gb is working fine, only I get a warning about the low transfer speed when setting it as internal memory (read speed tested with A1 SD bench is 40-50Mb/s, while Samsung EVO+ was about 60Mb/s, and gave no speed alert)

Strange that 128Gb is compatible but 64Gb not

Indeed this is curious.
I wonder if FP had own results on compatibility tests with their available sd card types which it could had shared with the community.
At least I don´t know of any published.
Purchasing one fiddling with troubles later is not the best solution.
At least there were tests done with 64GB cards. 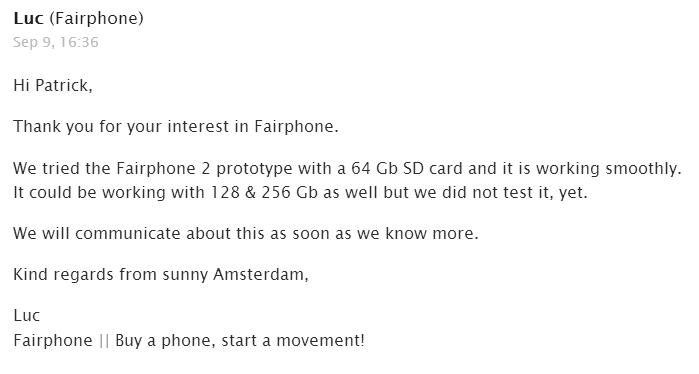 But now with Android 6 there is a need again to find a good match, so this could be a good time for FP to kick in with more test results.