Hi,
after installing /e/OS and then LeOS I want to revert to FP OS (connected to Win10).

… the final information “Info: Done. The dev…” does not appear, the windows command prompt was just closed.

Now I can can restart only into recovery mode: 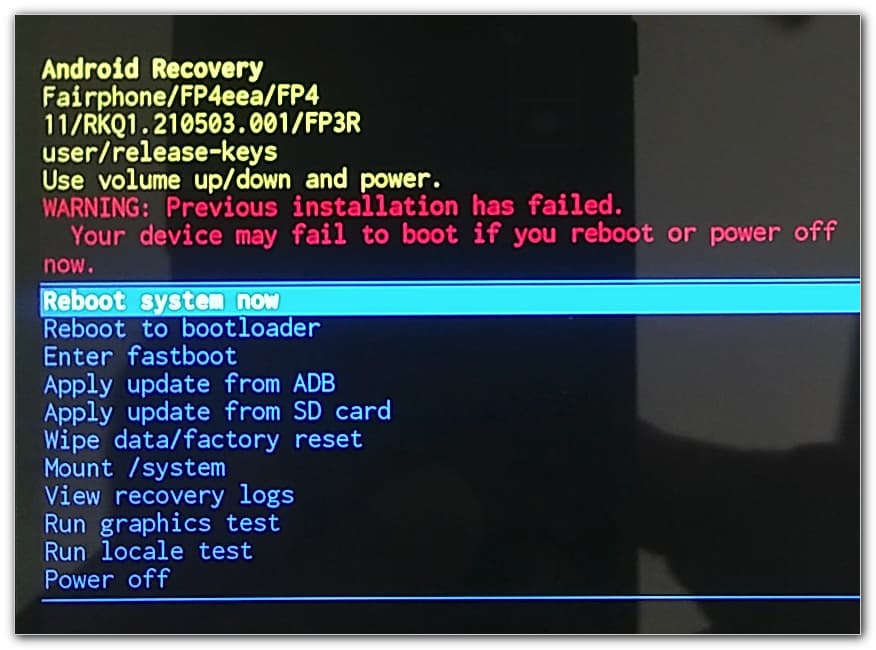 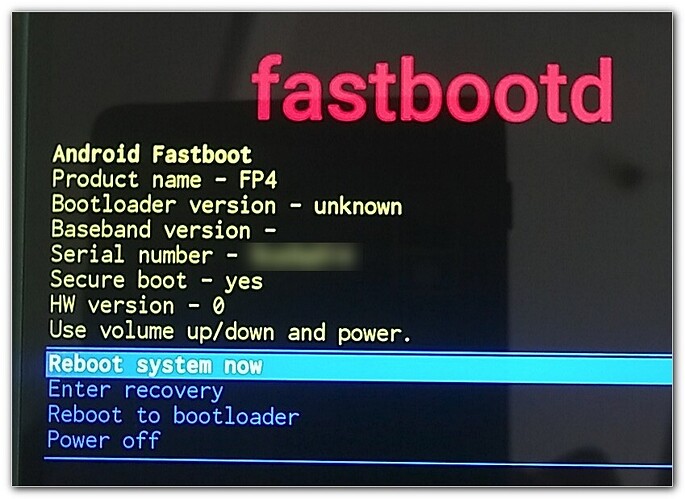 Any tip to jump into bed?

Did you try to just start from step 4 again?

You can also open a command window and start flash_fp4_factory.bat from there (after changing into the correct directory). In case of an error the window will then not close.

Hours später:
Now I have access via ADB again. flash_fp4_factory.bat executed with these command: 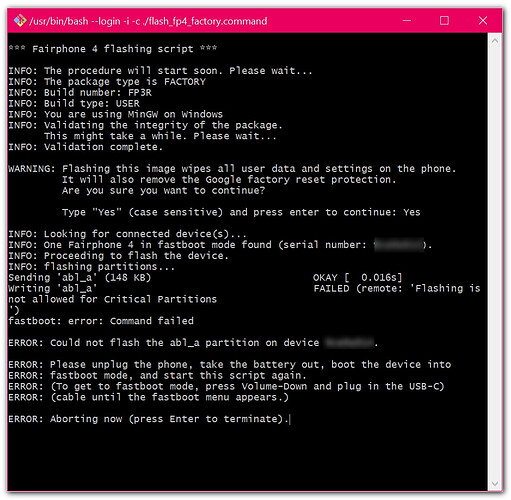 Any help appreciated! Thanks!

Next trial. And the final step 6 was successful.

With the little help of OBS I was able to record the last lines before the window was closed: 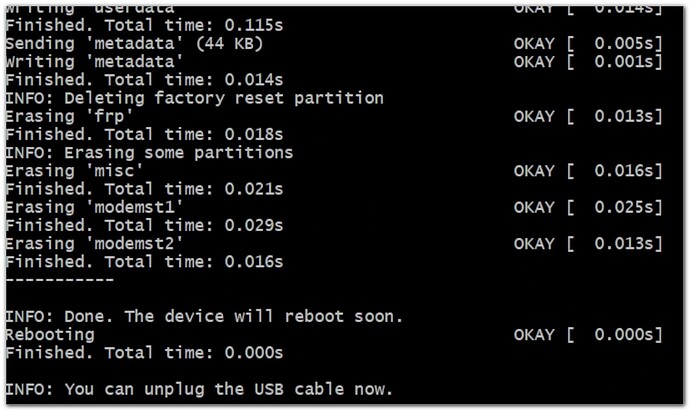 But the FP4 is in a “boot loop”, it reboots and reboots.

I have no chance.

I always have started the batch file within the command window and not by double-clicking. But it closes anyway.

In the meantime I tried it again - see my updates.

But I can’t boot into recovery mode; neither by the menu, nor by fastboot reboot recovery, only into the The FP4 boots always with this menu (after showing the Fairphone logo): 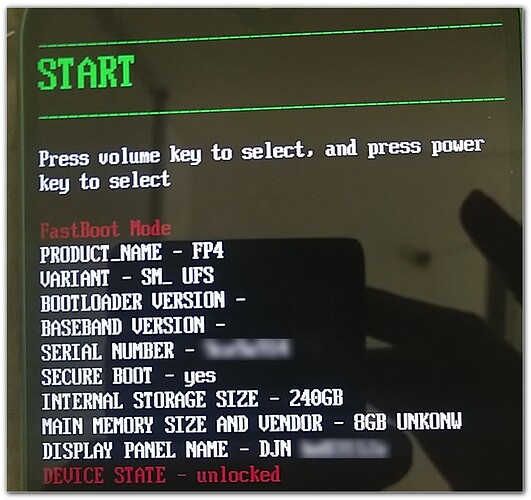 Did you try to go back to /e/OS or LeOS to see if you get a bootable device back by this?

Have you tried changing the slot?

Since your bootloader is still unlocked, this should be fixable one way or another

Did you look at the display after “each” reboot? I had the same/ following problem during installation . . .

And always allow debugging, the stupid phone does not remember that, . . . despite check mark

May sound stupid and too simple, for me this was (probably) the error

Did you try to go back to /e/OS

After booting again into the fastboot mode …

Did you look at the display after “each” reboot? I had the same/ following problem during installation . . .
→ Trapped in fastboot mode with locked bootloader and corrupted /e/ OS - #13 by Josh_FP3

… and after further trials to run flash_fp4_factory.bat with the same result (the command window closes and FP4 is in a boot loop again), I have run this command in “Git Bash”:

Screenshot of the beginning: 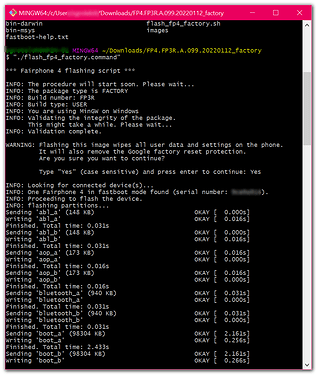 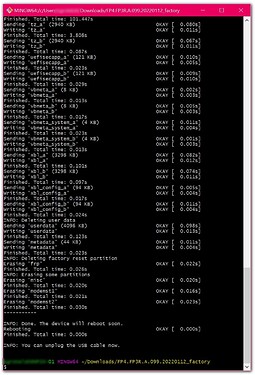 → all seems to have gone well. But again the “boot loop”. And again. And ag…

Now I am in the fastboot menu again (and aga…): 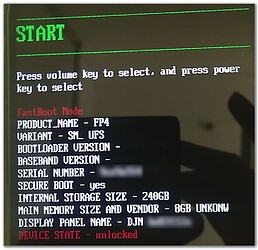 What is / would be the next step or similar?

Thanks again! And again…

Please try changing it to the other slot

that’s a in your case. 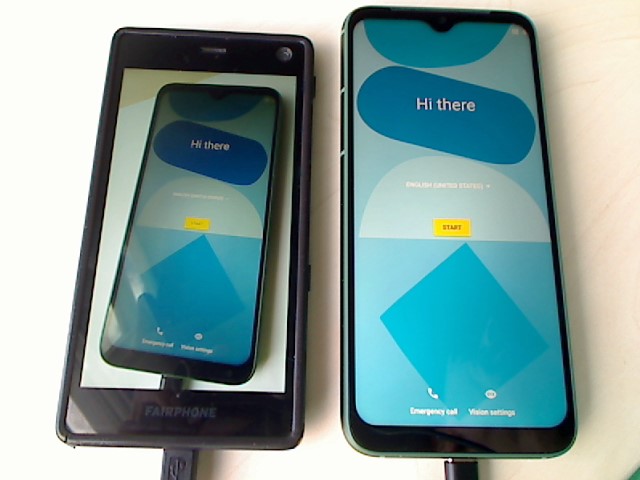 Only problem with LeOS and FP4 (after using /e/OS for a short time, which I use on my FP2 since more than 1.5 years): no bluetooth connection. Maybe because I did not reset correctly to the “stock rom” (?) after my /e/-experience and before trying LeOS …

Only problem with LeOS and FP4 …: no bluetooth connection.

“Only” seems like a big understatement to me, though, doesn’t it?
Nothing works without Bluetooth. At least with me. I couldn’t do without it.
Maybe it’s also because LeOS is only available as a GSI image. I am really skeptical

Therefore I’m going to try a fresh install of LeOS.

The first thing I did with my FP4 was to install /e/OS, which I still use on my FP2. But I was just interested in LeOS: if there are differences in handling, or if Android 12 makes a/the difference… and so on.

So I tried to install LeOS. But it was not as easy as /e/OS. But probably my fault was that I was not able to really reset the phone before the installation – removing all /e/ parts … – , e.g. the logo of /e/OS still appeared during/after the installation: 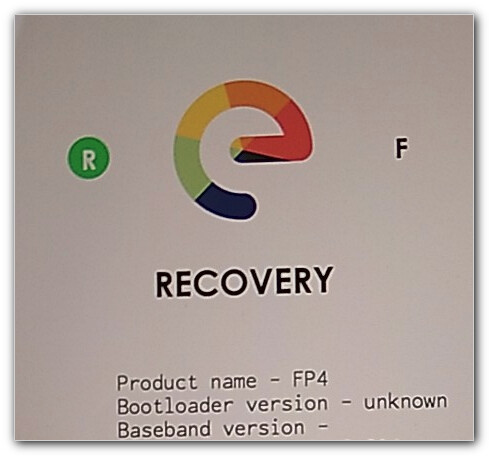 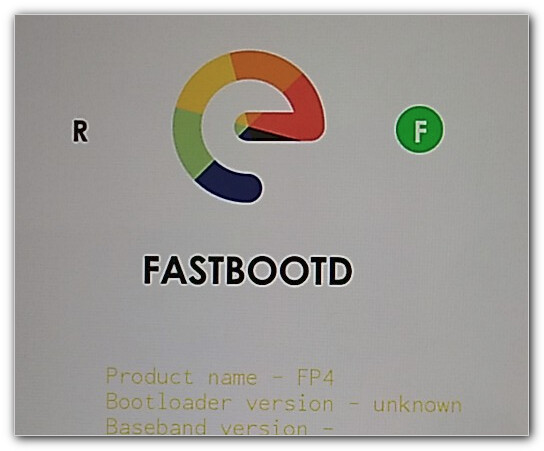 → therefore the suspicion fell on an “unclean installation”.

Just a dump question did you unlock the phone before you started with all that? And after the install lock it again? As it is written in the FP4 guide of murena (/e/ ).

Yes, I had to unlock the phone for/during the installation. This was not the problem.

Now having a fresh LeOS installation and – still… – no problems …