Well actually that’s just for taking off the display, I don’t feel like using a screwdriver now in the dark.

Doesn’t repeated assemble and disassemble wear out the plastic case pretty much? Maybe this competition is not the best idea in terms of longevity and reduction of waste…

Maybe this competition is not the best idea in terms of longevity and reduction of waste.

But didn’t the Fairphone team actively encourage owners to open up their phones on day 1 to create a stronger relationship with the phone?

Yes, but not a hundred times in order to win the teardown competition!

They want you to not be afraid to open it if something breaks.

I kinda feel like my dad saying this but… please be careful! Like @Ant0kneeguy says, be very familiair with how opening up your phone works. And of course, check out the iFixit tutorials when doing so. Yes, the phone can be taken apart easily and it is designed for that. But the reason for taking apart the phone should first and foremost be to repair the phone.

@paulakreuzer I have exactly same problem… I don’t want to break it. Good to hear that you succeeded without breaking anything! I will try to massage it now for a little bit…

I’m in the same boat. Getting the screen off is pretty tough. I can see how much it has to slide backwards but can’t get it to budge.

Is it going faster the second time around ?

Hi FP community,
I’m facing the same problem and stopped trying it for now. Any more hints how to “easily” release the screen?
Special points where to push or where to massage?

I tried to lift the screen with no success.
After that i read the manual (wow

and l watched a video that you have to slide the display part.

I wanted to show my brother, how “easy” the fairphone can be opened, so I tried to release the screen… and after nearly 45 seconds I made it.

It’s still not easy at all, but possible - with some “training”.

I also have a “feeling glued on” screen. Have been pressing and pulling it for an hour now, hands all messed up, and videos of people removing much easier to remove screens don’t really help. I hope the display isn’t broken when I turn it back on… Pretty disappointed at this, I have to say.

I finally got it and will share my “technique”.

After pushing and pulling here and there and loosening things a little already, I carefully pushed a knife’s blade

{ see note}* into the crack between the display module and the main body. I did this several times all the way around the phone. I also moved the knife a little to widen the crack in order to loosen the grip of the plastic studs. Make sure not to move too far so as not to break the studs and don’t cut into the display material. I have no idea whether this step was helpful and am aware of the risk, but I wanted to include it here anyway.

Then I held the phone between my legs the way shown in the picture. Do this with relatively sweaty hands

in order to maximize friction. Your left hand’s finger tips should rest against the plastic edge in front of the SIM card slots and push them upwards (in the direction of the camera). This will hurt a little due to the fact that the plastic edge is sharp. Also be careful not to let your fingers slip and push the SIM card slots themselves, which could damage them. This push, together with the grip of your left hand on the rest of the main body (pushing upward) and your sweaty right hand pushing the display downward (into the direction of the micro USB port) should do the trick.

{*} [note moderator Lidwien] Please don’t use a knife, it’s to sharp. You could damage the phone and yourself. Use a guitar pick or something simelar instead. 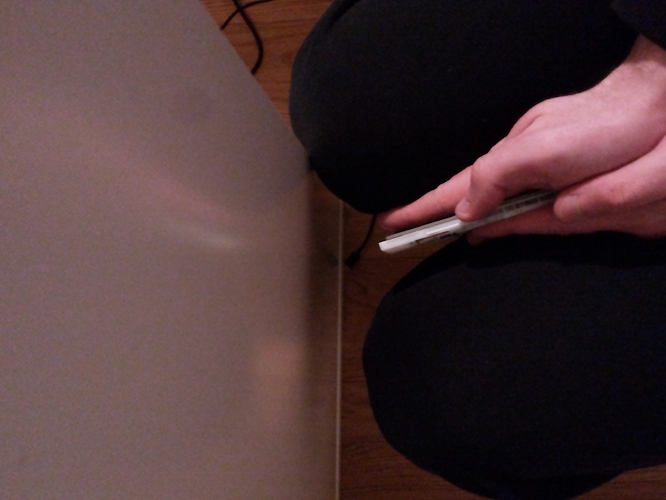 Wohoo! Finally! Screen off for the first time ever today

Ok so I disassembled the Phone today and reassembled it without front-camera, back-camera & microphone modules. 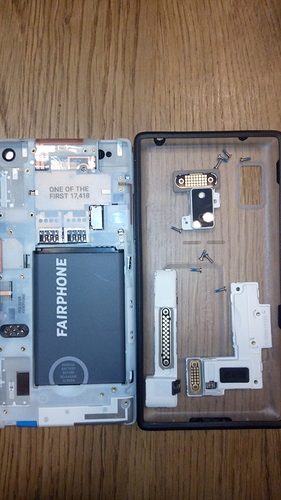 As you can see the phone works without those modules. 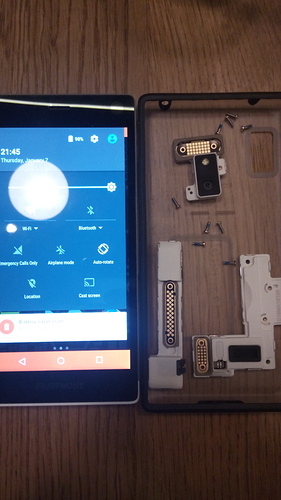 @paulakreuzer: Did you do this out of “idle curiosity” or due to security concerns?

Just curiosity, although someone else already did it.

Your left hand’s finger tips should rest against the SIM card slots and push them upwards (in the direction of the camera).

You really should not use this technique.

Especially with sweaty hands you are very likely to damage the metal parts. Do not put fingers or part of your hand against the SIM slots.

The best part to put some pressure if you have to is between the camera module and the speaker.