Thank you for extended reply.

This could correlate with my “RAM observation”.

The longer I use youtube, e.g. to stream music or GPS the more likely a reboot gets. I thought, maybe it’s an overflow. But Stream>CPU temp up>Reboot also sounds realistic.

Again did a hard reset. Cleaned contacts things got worse.

all the above without SD card and SIM card.

If I put the FP away in a cool place, wait for a little time, it proceeds with the android installation till I get the welcome screen (where I have to select the language). I can’t use the touchscreen. Autorotate and the power button are working. Spot “yours to open // yours to keep” is very warm. I will put it in a cool place and wait what happens if I don’t do anything.

Is it an FP2 with a Slim Case? If yes, check if the power button is jammed. Fellow Fairphoner kerhac has found this issue.

I have a FP2 Open OS since one year, my phone works fine, but since some weeks I am noticing a strange battery behavior.

This is a screenshot of my battery usage I took this morning (don’t mind about the strange colors, it is the blue light filter is use, Twilight). 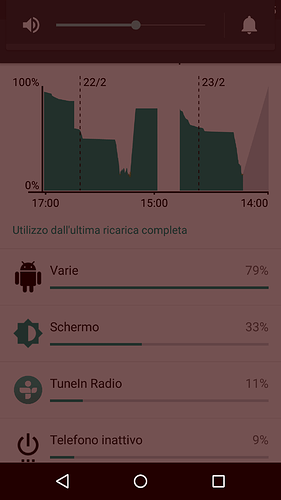 The most impressing thing is the big gap in the middle, yesterday afternoon. I am sure at some point yesterday afternoon my phone spontaneously rebooted, but, as far as I remember, it just rebooted and worked fine after that.
I have always had random reboots. At each update the frequency of reboots changed, sometimes improving sometimes getting worse. However, since a few months, I have reboots on average once a day, which is ok, it is not a major annoyance. However I never noticed these big gaps before.

The other strange thing is the consumption percentages:

To be honest I am not sure this issue is related to the one presented in this topic, feel free to move this post if it is not.

Did some testing and tried the tips given. Update:

I over-thought this behaviour over and over again. First I thought it was an overload/temperature problem of the CPU. But this afternoon another possible cause came to my mind. Since my FP2 and my daughters FP2 are from the same batch, the difference between them is that my daughters FP2 has had a lot more read/write-actions to the internal memory compared to my FP2. She is a heavy user of social media apps like Snapchat, Instagram, Whatsapp, Telegram, Messenger etc whereas I only use Signal and Telegram with a 20 times less intensity as she.

With that in mind, I imagined, could it be that the internal SD memory of my daughters FP2 is maybe starting to get corrupted/failing due to extensive I/O to the internal memory from all those apps?

To get insight in this hypothesis I download A1 SD Bench, an app to test the read/write speed of the internal memory and the RAM.

Is there a way to test the internal memory via a “checkdisk//fsck” command to see if it contains any faults/corruptions?

Next to testing the hypothesis if this problem could be related to corrupted internal memory, it think more an more it has nothing to do with the software installed on the FP2 but is totally related to head building up at the spot “yours to open // your to keep”. Does anybody know hardware is located at that spot.

Can others experience the reboot problem confirm that if they cool down their phone (e.g. putting it in the refrigerator <- at your own risk) that the rebooting stops for some time with the software normally causing it to reboot?

I’m also suffering from random reboots and currently I’m working my way through all the suggestions. I have a few questions on the following ones:

Take the phone apart and carefully clean all connectors between the modules.

Would the teardown guide from ifixit be the right one for trying this? What do you recommend for cleaning the connectors?

Is there somewhere more detailed info about how exactly to do this? E.g. how to capture the logs on a PC (Windows or Mac). I’m running catlog (from f-droid) on my phone, but so far couldn’t catch any relevant errors with it.

I’m having a hard time pinpointing the issue in my case. So far it always happened when the phone was idle and I did not use it. I have disabled 4g, mobile data, wifi and GPS. I already ordered a new SIM card and use a brand new SD card.

The reboots don’t happen frequently, at most once a day, sometimes there’s a week between the reboots. I did a hard reset and switched to Fairphone Open (because only then I discovered that you don’t have to build it yourself anymore, but can just download the installer). I waited for a week before installing any additional apps and everything was fine in that time. However now they are back. I’m not sure if I was just lucky in that week or if it’s indeed a 3rd party app.

Before ordering a new SIM I had tried switching the SIM card to the other slot and the result was that it started to randomly loose the network connection. A few times it asked again for the SIM PIN after going through the network settings, one or two times I got a message that com.android.phone crashed, but mostly I had to disable and re-enable the SIM to get it to work again.

Any ideas or help is appreciated.

So now I have come to the point that I think the phone is broken from a hardware point of view because due all the testing I was able to do because we have 2 FP2’s I think it is definitely NOT a software issue.

Furthermore, remarkable is the fact that if the phone gets in the reboot loop and I don’t turn it off but leave it rebooting, at some point I get the screen:
"…
Android is starting
Optimizing app xx of XX
…"

This screen is the same as the screen just after a fairphone update has been executed.

I am going to send an e-mail to Fairphone to ask them for the warranty procedure.

Would the teardown guide from ifixit be the right one for trying this? What do you recommend for cleaning the connectors?

Yes, the ifixit guide is the perfect source for a how-to on dis- and reassembling the phone

Is there somewhere more detailed info about how exactly to do this? E.g. how to capture the logs on a PC (Windows or Mac).

How to gather logs Software

So you've ran into a problem on your device - or you simply want to know what's going on inside? That's great! You may notice that there are many things missing here. If you know them, add them - this post is a #wiki . If you are uncertain about changes you can discuss them first here. On your device TODO On your PC with adb Setup adb. Windows: TODO Linux: Simply install adb via your package manager. You should know how to do this. (I ran sudo apt install android-tools-adb.) OS X: TODO …

If you need to know how to install ADB on Windows, also have a look at this:
https://forum.fairphone.com/t/pencil2-adb-on-the-fairphone-2-windows-driver/11529?source_topic_id=11553

I am going to send an e-mail to Fairphone to ask them for the warranty procedure.

I’m impressed by the amount of testing you did, and I would definitely agree that contacting support for filing a warranty case is the next logical step.

I would recommend to add to your support ticket what you have done already, as this may speed up your request.

@freibadschwimmer ; Dear Gerald, thank you for you reply!

@all: despite the fact that I am filing a warranty case. Yesterday I left the phone for what it was at the usb-charger and it gave me a interesting notification. The notification was in the popup/task/notification overview and said: “Storage space is running out”

After clicking this notification it gave me the following information: 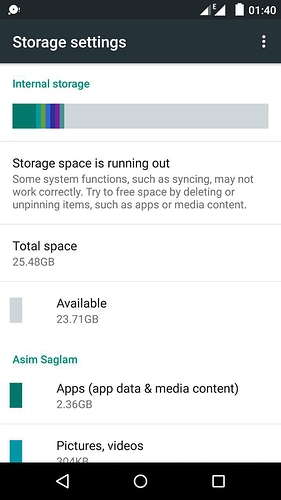 Thanks a lot @freibadschwimmer for the helpful links!

Yes, the ifixit guide is the perfect source for a how-to on dis- and reassembling the phone

Do I go all the way and completely disassemble it? Any tipps with what to clean the connectors?

Just as an update, here is another updated screenshot of my battery consumption. 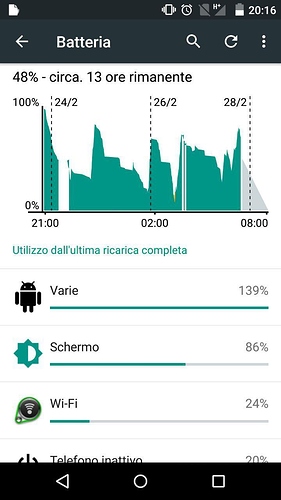 The strangest thing in my opinion is the Various consuming alone up to 130%. How is it possible? Is it normal?

Otherwise, I have had a few reboots these days, the strangest being the big one I already mentioned, on February 24th. To be honest I do not recall about the two of the 26th, probably the phone was not on use (or maybe I just have a bad memory).
The last ones (I had two in around 10 minutes) happened one hour ago. I do not know if it helps but during these two I was straggling surfing the internet in a intermittent connection situation (i.e. using data connection on the train in a area with many tunnels).

Is this all situation normal?

For some time now my phone keeps rebooting. I didn’t make any changes to the phone and I could not figured out any specific cause.
The phone often reboots when I put it back on the table after a phone call. But, I often recognized that my phone rebooted in my bag when I take it out and I am aksed to type in the PIN. So it happens without doing anything.This is particulary annoying because people can’t call me.

Does anybody know what the problem is and how it can be solved?

Sounds like your battery is not fitting tightly. There is an easy DIY fix for that:

I don't have the issue mysrlf, however I'm also not carrying the phone in my trousers' pockets anymore. This sounds to me as if the reboots are caused by loss of contact between battery and mainboard, because the battery doesn't sit tight enough. Does it get better if you fix the battery in its place, e.g. using a piece of (folded) paper?

Thanks for the answer.

If that’s the case, is it a service issue then? Should I send back the phone so that it is getting repaired?

Since it seems like this problem is still not really accepted as a relatively common issue with the FP2, I would like to state that I have it as well.
Actually, I have already got my second FP2 through customer support and I still have several random reboots about every other day. How likely is that?! At least the display issues with my previous FP2 are gone but this is still very annoying.

Does anyone know how I can access the Hiccup statistics if I cannot see anything labeled Hiccup in the Maintenance settings?

Nothing specific to add to this thread except that I’ve experienced the same issue: seemingly random reboots, every day multiple times for over the past 9 months or so.

I am on my 3rd Fairphone now, just got this handset last week and already experiencing random reboots. Will be working my way through the fixes on this thread this weekend to see if these help