I’m very disappointed with my FP2, which shows very unreliable display, such as display not lighting up at all, or displaying weird things, or suddenly going dark…

I tried to remove the display, clean the contacts and replace, but this does not change the situation. Worse, the display is now even harder (wasn’t very easy the first time) to remove from the main board, to the point where I do not dare forcing to get it removed, as I’m afraid of breaking something.

The support is less than helpful as all I’ve got in 3 weeks is an acknoloedgement of my query.

Am I the only one in this situation? At the moment I have regrets having chosen this phone, for this lack of reliability and support. 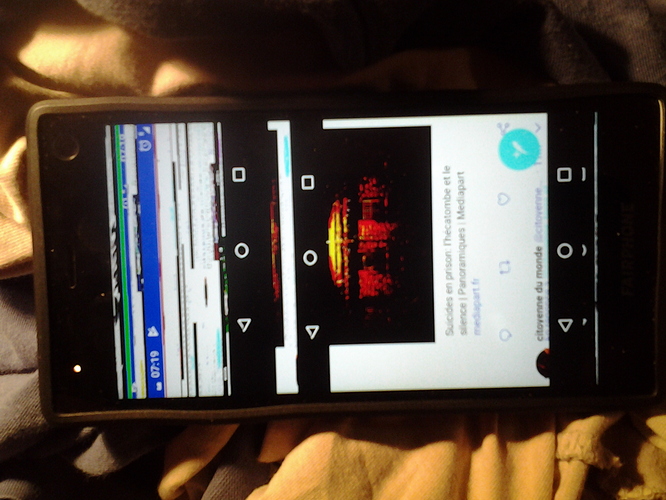 Worse, the display is now even harder (wasn’t very easy the first time) to remove from the main board, to the point where I do not dare forcing to get it removed

Usually it’s the other way around. Is there a chance you didn’t put it on right? Do you see any gaps anywhere that don’t look normal?

If that’s not the case and cleaning the contacts didn’t help than you probably won’t get around a replacement.

To get a fast response by support try this trick.

I’ve been very cautious when replacing it, so I doubt I could have put it wrong. It went back very easily, don’t know what could be wrong (and the design seems very fool proof).

I appreciate support is not an easy task, but one should not have to open a ticket AND THEN call to get an answer. I hate putting pressure on people, and calling right after creating the ticket feels like unnecessary pressure.

I just hope this issue will be taken under warranty (my phone is less than 2 years old), otherwise I don’t think I’ll put much money in fixing this without any guarantees it won’t happen again.

I hate putting pressure on people, and calling right after creating the ticket feels like unnecessary pressure.

It’s actually the opposite. Support prefers if you do it like that because things can be sorted much faster via phone call than via eMail, so: less work for support and less waiting time for others. Everybody wins.

You’re not the only one.
Now after nearly two years, my FP2 also behaves similarly.

I have already in my FP2 life:

Now this display issue is really exhausting : everything is OK and suddenly it starts again, I am forced to twist my phone to see if it makes things better. Sometimes the FP2 displays a messages stating that the app that was running (whichever the app) is not responding, and the screen being unresponsive, only a battery removal can help.

I now dissassemble my FP2 on a daily basis, and each day I feel my patience slowly running low

Note that I consider the hard reset as a really last chance solution, but I will have to find some time to backup and restore my apps and configuration.

Some links to screen issues:

… there is the same problem with my Faiphone, but its the Fairphone 2… Edit by @Stefan: This post was moved from here (see photo of noisy screen).

Hello everybody I have my phone for almost 5 months now and so far I only encountered minor problems. However, lately it does not allways react when I press the power button to turn on the screen. The phne is switched on, but the screen just remains black. Only after one minute or two the screen becomes activated. When I receive a text message during that time, I can hear the notivication sound, but the screen remains black anyway. I know that other people have reported problems with the scre…

What is up everyone? Similar issue on my side: two weeks ago, my screen starts to behave strangely : sometimes, a part of the screen would display some noise (random colored pixels). Switching off the screen and on again, display was OK. Then it got worse : happening more frequently. Then affecting the whole screen. Once all the colors were wrong. I took a screen shot (power+volume down). After switching the screen off and on again, I checked in the gallery : the saved image had normal color…

Hi, thanks for your reply. It’s somewhat “comforting” to see I’m not alone, but I hope Fairphone will take this seriously and act appropriately.

We’ve already bought a second phone for my wife, but at the moment I have regrets as, if it fails the same, the whole point of a durable phone will appear a failure.

I feel much better, since I had a contact with support (but, Fairphone, you should definitely work on this: eiter the support organization needs to contact users when they open a request, OR the acknowledgement mail should insist on calling the support team)

My display module should leave home tomorrow, and I expect a replacement will be sent soon…

Well… i’d have been happy to report good news, but the sad truth is that, now that I have received a new display module, the behaviour is different but still faulty: flickering screen , touch non responding, weird display…

I’m afraid the phone is flawed by design and seriously considering switching back to a “dumb” phone. If the FP2 lasts only 2 years, I do not see the point in the modular design.

After all the changes I made (see my comment above), my FP2 screen is behaving worse and worse, and twisting it only resolves temporarily the issue.
As I have to twist it more often and harder each time, before I break really some internal component I have decided to give up

As I know that the fairest phone is the one you already have, I switched to an old Galaxy S5 I still had in my drawer.

I will maybe open a ticket to support but as it is an issue with the core module itself (I changed every module and screen), even if they send me a new device, I consider not being able to keep my FP2 for more than 2 years a failure. Of course, it is only MY phone which I used a lot every single day, I am sure some will keep their phone for more than two years. But personally, this is the point where I suspend my adventure with my FP2.

I still consider the whole project and vision valid and necessary, the modular part is really a great idea, support was always good and I will probably look forward to the FP3 and join again later.

It is only a temporary ‘good bye’, we will hopefully meet again.

Sevan
P.-S. : as this forum is also one great place, I will keep reading and helping

I finally contacted support again, and received a brand new phone to replace my failing sample.

I do not feel comfortable about a new phone after two years, but if this is a “youth” or random issue, then I guess things happen that way.

Support has been very friendly (even when I showed some anger, sorry guys) , as well as delivery service (special thanks to the DHL driver who may think we’ll meet again every week