Please keep us updated if the FP-Team will answer your request later
on… I think about the same way, because a working camera is very
essential for my phone… 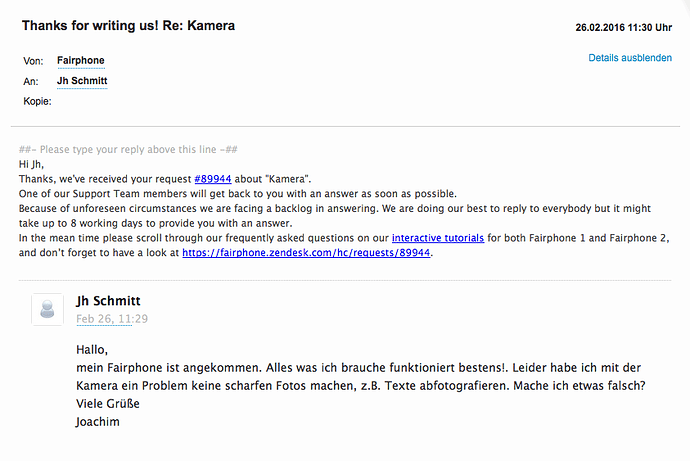 So your support ticket got answered …?

Waiting since 3 weeks now. They could at least change this automated “up to 8 working days” message.

They could at least change this automated “up to 8 working days” message.

They did. When I opened a ticket yesterday it wasn’t there anymore

Support request not answered yet

In case writing here speeds up the request, I made my first about a hardware problem (the charging socket seems to be broken) 6 weeks ago and haven't heard anything since apart from the notification it might take up to 8 days…

2 months seems to be a bit extreme to me. My personal limit before i start asking is 1 month …

An official “sorry, there have been some defective camera modules, we`re working on a software fix/added it to our bug list/will replace it” would be appreciated!

Reassembled the original camera-modul. Unfortunately it doesn’t focus even with upgrade 1.2.8…
Waiting for any replay to my ticket i orderd a new Back Cover Blue Translucent. Really love my FP2! 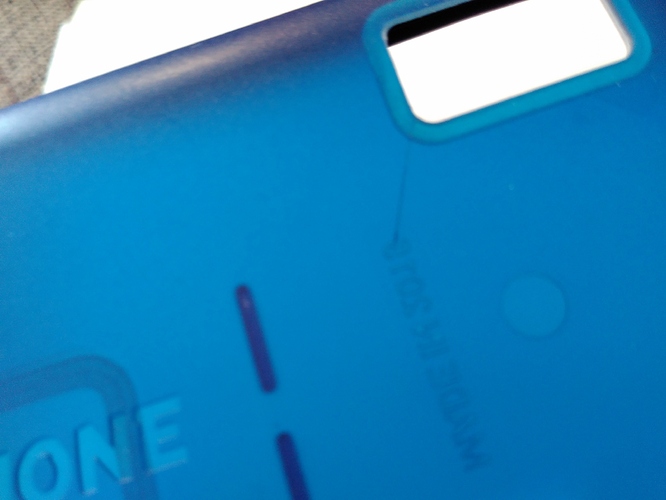 Today finally i got an answer. They suggested to try first another camera app and second remove and than put back the camera modul. This is what i did yesterday but without positive result. The message ends with: “If your camera issue is not fixed after all these troubleshoots, we will have to initiate an in-warranty repair of your device” Hope they mean the camera modul and not the wohle phone … i don´t want to miss it.

A post was merged into an existing topic: Support breaking down?

i follow this thread with great interest. i have the same experience as many of you: focussing with the FP2 camera isn’t that easy. i tried several camera apps but the problems remain. funny enough, i have no issues with scanning documents to PDF and that works fine. also, macro-type pictures of coins from a distance of ~10 cm are not really a mess. but zooming even to a low degree renders the camera unable to focus. it’s cumbersome and i’ll probably try to exchange the camera module.

Good news! They refunded me the order for the new camera and asked me to send back the original one. If not before, now i am a real fairphoner. Hat zwar ein wenig gedauert, aber wie man im Forum sieht ist die Kamera ja nicht die einzige Baustelle.

They asked me to send my phone for repair. Would be much easier to send me a camera module.

They suggested to try first another camera app and second remove and than put back the camera modul.

Did you try both suggestions? I tried also the second one before they told me today because i wanted to exclude that the failure comes from the assambling process of the whole device. Maybe for your camera modul it´s the solution.

Same here, neither of those worked and I’ve been waiting for an answer for about 3 weeks…

"To have your Fairphone shipped to our repair centre, please follow the instructions below:

My FP2 will be picked up by DHL and sent to repair today, I can only imagine how long this will take…

10 posts were split to a new topic:

1 month later: answer.
I have to create an account at a return portal and send my whole phone in, which i am not ok with as my phone works perfectly fine and only my camera is defective - replacing the module helped for others …

Behind my battery there is only this CE1588 sign, on the side the two IMEI, serveral smaller numbers on some parts, but nothing i would identify as serial number. My battery has a serial number, but not my phone ?! Am I blind ?! Someone help pls. (No, its not one of those preordered phones with numbers from 1 to 17ksomething).

This article should help

Quote in the return portal: Your serial number can be found on the back of your Fairphone behind the battery.

So this is wrong or refers to FP1.