I usually have more than one battery for my phone because I need a back-up when travelling in case my battery dies. One really nice thing to have is a separate charger for the extra battery, which then eliminates the need to have your phone plugged in at any time. so…

…is there a battery charger that fits the Fairphone battery? Has anybody tested this?

If the battery is incompatible with the FP battery, wouldn’t it be a good thing to develop one? I’m sure i’m not the only one who uses more than one battery.

Have you thought about external battery packs/power banks?
Since they are micro USB they should all be compatible with the FP.

Yes, I have though of external battery packs. Aren’t they more bulky? and probably costs more then a spare battery? I would prefer the solution where I charge batteries when I’m home and just carry them with me.

…is there a battery charger that fits the Fairphone battery? Has anybody tested this?

I second this. The ext. charger doesn’t need to be Fairphone-branded, but just ‘something that works’; any info would be welcome… 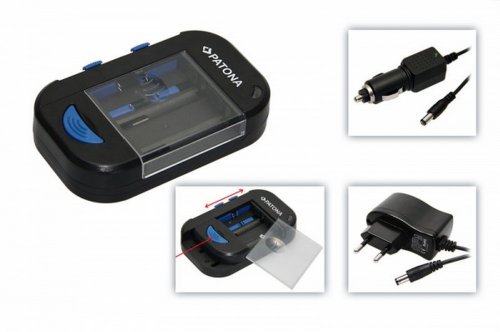 It seems to have adjustable contacts and supports widths up to 5cm so I see no reason why fp battery shouldn’t fit.

Still, if you have a backpack or even a shoulder bag, carrying a powerbank, which is about as big as the box your FP came in, or even smaller, would be much more convenient in my opinion.

In my case, the idea is rather to have this charger with my second battery plugged simply on my desk, ready to be taken instantly when I’m leaving for a couple of days… I’d go away just with the second battery, and an USB cable just in case…

Exactly Herve, that’s what I find most appealing about an extra battery.

In terms of energy usage, transferring on to an external battery pack like Xaedil suggested, and then onto your phone, seems like an unnecessary extra energy transfer (resulting in a waste of energy, assuming energy storage it not 100% and some is lost as heat). Well, that’s only a minor problem probably…

I use a Brunton Metal 4400 and it works good for 1,5 charges. The power-pack needs to be used a couple of times to achieve optimal charge.

just for your information: I have bought the suggested charger by Universal and it is - ok - .
It is a little bit to small for the fairphone battery, so you really have to use some force to put the battery in, but it works…

As my fairphone has a defective contact and the battery won’t charge anymore in the phone, this was the only solution I found.
If anyone else has a suggestion - feel free to tell me =)

I use my FP1U very heavily at work. My first battery is knackered so got a replacement yesterday through the post. Very efficient service by the way.

Given how easy it is to swap the battery could you develop a separate charger platform as an accessory, or suggest a supplier for such a thing. Of course it would be ideal if it ran straight off the 5V 1A mini (micro?) USB plug. All, I think that it needs to be is a very lightweight battery cradle with the same sort of spring contacts from the phone.

I am sure that the combination of a very simple cradle and a spare FP battery would make a very simple and effective additional battery capacity.

I’ve moved your post to this topic, as it basically deals with the same question. Also, there is some discussion of external battery chargers in another topic from this post onwards.

Most helpful. I will study other peoples solutions.

3 posts were split to a new topic: Solar charger recommendations

After my usb-plug broke, I bought this charger ( https://www.amazon.de/gp/product/B005REEWYY/ ) and - so far - it works fine!