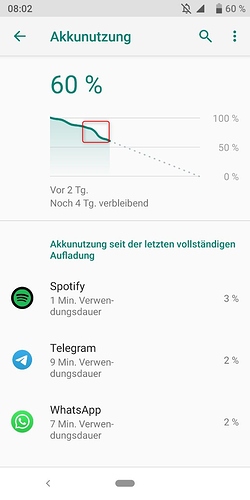 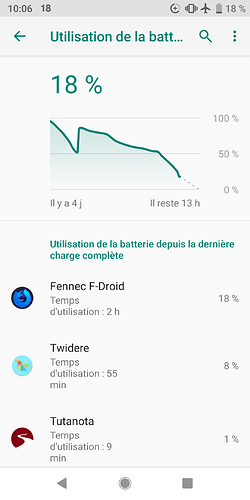 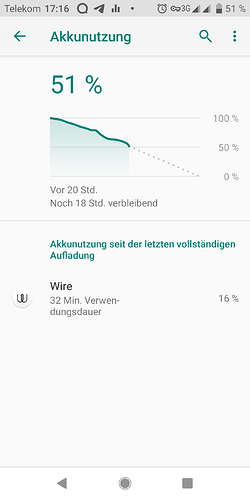 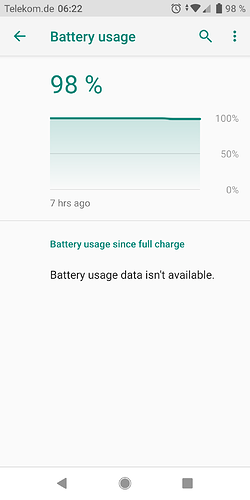 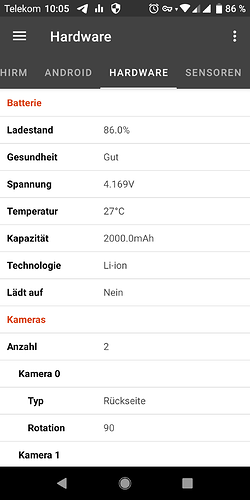 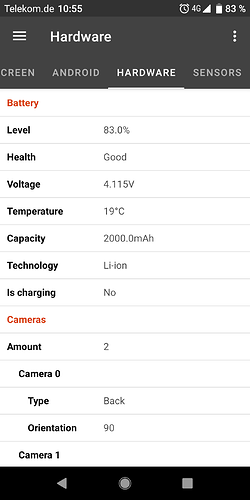 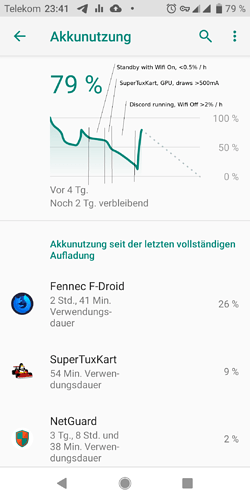 This is my phone basically lying around at home all day (24 hours since the last complete charge) … alarm activity in the morning, no surfing the web, no calls, some turning the display on and off to just check the battery level 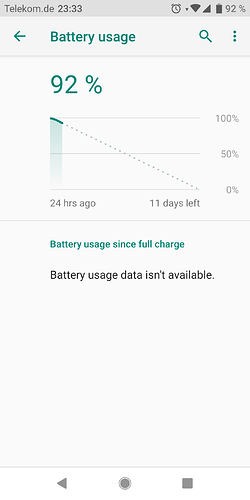 Edit:
24 hours later … I’m trying to run down the battery some more before charging again to see whether the reported level is plausible (i.e. battery calibration is ok) … about 9 hours of the browser being on all the time, Fairphone community forum browser tab open nonstop like the upstanding, exemplary forum lurker I am 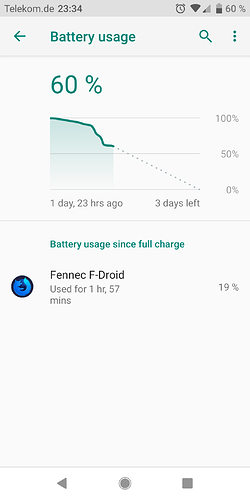 Edit:
Another 24 hours later … After watching the battery going down 7% over the course of 14 hours of idling, I ran video streaming for about 6 hours to keep the display busy and see whether something surprising would come up with the battery getting used more, but nope, battery going down nicely linear into energy saving mode, which I set to start at 15%, and that’s when I stopped keeping the display on.
So this awesome battery life seems legit.
Going to charge now. 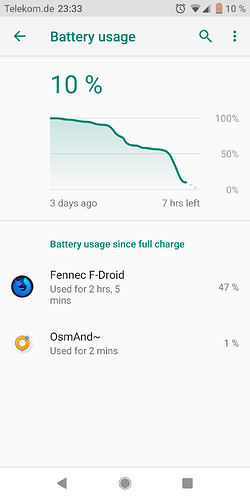 OsmAnd use was yesterday, so was any Fennec use (but there are 8 additional minutes given here). Funny this didn’t make it into yesterday’s battery usage list. Perhaps Android processes this data at intervals instead of assembling current data every time you bring up this screen?

Hello,
I waited a few weeks to be sure but the problem seems to have resolved itself. Maybe my battery needed several charge cycles to get calibrated correctly. I did not have this problem after a month of use.
I hope it will continue like this!
Thanks for your help!
Béa

The problem came back for me, after about 2 months of usage, last night the phone turned off while being on standby - discharged over 50% in only 34 hours without any usage, data and wifi turned off.
According to Accubattery the phone spent most of the time in deep sleep, yet it used up over 1600 mAh of juice while doing nothing.
That’s averaging on 48 mA drain current in deep sleep. Way too much! 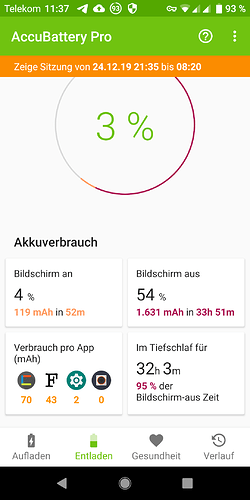 The battery is well calibrated by now and the charging data from Accubattery is consistent, so I can rule out both bad calibration and the battery is definitely still good.
(Accubattery’s estimates are consistently between 2900 and 3000 mAh total charge averaging on 2966 mAh capacity)

Something drained the battery while the phone was supposedly in standby/deep sleep.

And its not happening always, I didn’t have any of this phantom drain issues for weeks, then suddenly the phone is off in the morning.

Sounds odd.
The December update is out, by the way.

I don’t see it yet. Due to the staggered release philosophie it could be weeks before that update gets offered to me, I didn’t get the Oktober update before end of November.

Btw, a after a device reboot (forced, since it had turned itself off at 2% bat), the phone now only uses 15 mA in deep sleep – with wifi ON!

The problem seems intermittent. I don’t know what causes it, although I have a suspicion that its more likely to get triggered with Wifi OFF than ON. I’m going to leave wifi off tonight to verify.

Nope, that wasn’t it. Tonight with Wifi Off, the phone lost only 86mAh in 7.5h averaging at 11 mA power usage. I have no clue what exactly triggers this issue, but it doesn’t seem to be Wifi.

What has been y’alls experience with the lifetime for the battery?

I’ve had the phone for about two months. With battery saver on my last full charge got me 7 hours of standby, and 30 min screen time. Mobile and Bluetooth off, WiFi on. I think that’s pretty dismal.

I moved your post here to avoid duplicate topics, please have a look around here.

With battery saver on my last full charge got me 7 hours of standby, and 30 min screen time. Mobile and Bluetooth off, WiFi on. I think that’s pretty dismal.

Your original post was about the FP3, so I can share my own experience. We have 2 FP3, my typical usage is Mobile on, either Mobile data or WiFi on (but not both), GPS on (but no app running which needs it) and Bluetooth off. WiFi scanning is turned off for security reasons.

When I got my phone I could work for 4 days without recharging even when reading books and the like. My wife could use it for 1 day but this boiled down to one specific app, after removing this app, it lasted about 2 days.

So what you wrote is clearly not normal, I would do some tests to rule out possible candidates (disabling apps, setting WiFi off, etc). Mobile and WiFi can consume much more battery when there is a bad or no connection.