I agree. A cost breakdown for FP2 like they had for FP1 would be a very good thing.

I’m waiting for the source code drop before pre-ordering, others might be in the same boat as they don’t want to be stuck with vanilla android as the only operating system choice.

If I don’t think SailfishOS will work on it, then there’s not a huge amount of point in buying one imho

Just to add some weight to what has been said before:
I would like to see the cost breakdown before I order the FP2.

@urs_lesse: I would like to see your chart to be continued. That was already one of the question to FP team while selling FP1 - but they did not publish somethin like that.
So let us know when you updated your graph

I guess it makes sense to update it around midnight tonight or tomorrow after the completion of another week.
Actually I got neglective for a moment and am missing the value for midnight monday/tuesday 17/18 August. If there’s a fellow compulsive character around who can supply it, feel free to!

Otherwise I’ll just include the mean between sunday night and tuesday night and leave that column without labelling.

Thank you @gewuerzketchup , I just added a (small) wild guess to your evening number.

Growth seems to be holding out linearly since the initial surge - looks like they will manage to sell around 12500 by the end of September. Needs a big corporate buyer to pre-order a few thousand!

Meanwhile, a colleague who considers himself a bit of a fairtrade greenie just delightedly found his mobile contract had expired and that he was entitled to an “upgrade” - so merrily ordered a new (non repairable, sealed-in battery) Samsung … whilst his existing handset (which still works) heads for the recycling bin. If only EE, 02, Vodafone et all were offerring FP2s … but why would they if they are designed to last… heaven help all those profits if people went “sim only” and kept their old handsets. Capitalism and the growth it fuels, that benefits EVERYONE so much, would surely collapse, plunging us all back into the dark ages…

Meanwhile, a colleague who considers himself a bit of a fairtrade greenie just delightedly found his mobile contract had expired and that he was entitled to an “upgrade” - so merrily ordered a new (non repairable, sealed-in battery) Samsung … whilst his existing handset (which still works) heads for the recycling bin. If only EE, 02, Vodafone et all were offerring FP2s …

Last year, in this same situation, I bought, unlocked and sold an iPhone 5s and earned around $300 that I could spend more responsibly. There’s always people for buying shiny stuff.

I think there is a lack of visibility, I read about Fairephone only in this site!

In adition, I would like to see some information regarding other OS running in this phone, why not Sailfish?

I think there is a lack of visibility, I read about Fairephone only in this site!

That’s not entirely correct. There are many newspapers and tech-related websites that actually write whole articles about the Fairphone 2. So I don’t think visibility will be a serious obstacle for the 15k mark. Yet, the more people know about the project the better.

In adition, I would like to see some information regarding other OS running in this phone, why not Sailfish?

That’s a little too far off topic in my opinion. There are several other threads discussing OS possibilites. For example here(closed topic) and here.

Here you can find an (incomplete) list of news articles about the FP2 in various languages. I’m sure there are many more articles which are not included.

So today Fairphone officially announces their new phone: The Fairphone 2. Here are some useful links: FP official video: Scroll through this page to find out more about the new phone: https://www.fairphone.com/phone/ Some more info on Design Technical specifications overview of the Fairphone 2 and detailed specifications Here's a great (and long) blog post from Fairphone's CTO on the design of their second phone Press release (PDF) Fairphone 2 Supply Chain You can check out the prot…

I actually agree with @Jordi about the lack of visibility, but I think it’s not necessarily a lack of media visibility, but – I know I suggested this before – a lack of first-hand visibility. I wished it was possible for Fairphone to stage a few more events outside Amsterdam and the Netherlands. Finding a cheap or free venue should not be such an issue, I think there are many non-profit organizations who share and support Fairphone’s aims and could help with the logistics. Simplified: Show the Fairphone 2 in events in London, Paris, Madrid, Rome, Vienna…

It’s not just the event itself, it’s also that such events provide additional opportunities and justifications to remind your friends of Fairphone e.g. through sharing a Facebook event, using your organization’s email list and so on. One event produces multiple opportunities to bring back Fairphone into potential buyers’ minds.

We were trying to get a Fairphone 2 prototype to.showcase it at the Urban Mining Workshop of the Austrian Fairphoners at this year’s Vienna Open Festival and this was the answer @anon30133089 gave me via email:

In regard to the prototypes we have now, there are just a few models and we need them here for tests so we don’t loan them.

Have you considered inviting a FP employee to be there in person (so the prototype would stay “in Fairphone’s hands”)?

Of course we did!

I’ve scheduled it in our event calendar and if anyone of the team can go to your region around that time and combine it with our business, I’ll let you know.

I see that Sean is attending E-Scrap Conference in the US, but that’s unfortunately not exactly “our region”…

I guess we will see 9000 Fairphones sold by thursday night. 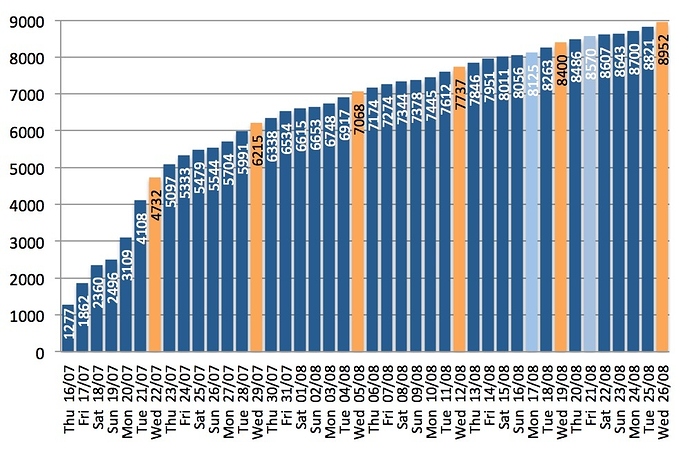 That looks like the number of sold phones per week decreases by ~100 each week right now. Gonna rise again. Stay Positive.