First week sales averaged around 625 a day - but included all the people who’d been waiting in the traps for the starting gun.

I just hope there are enough people with:

… and what happens if there aren’t?

I guess we all hope they will, but I think there has been a considerable slowdown after the first week. 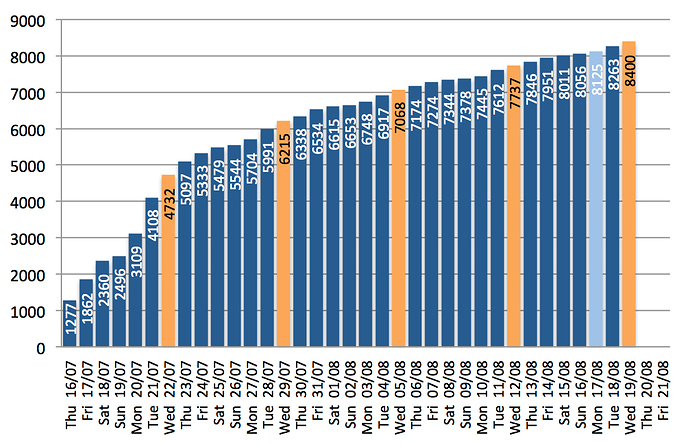 FP-Kurve.jpg1193×771 679 KB
Values represent the accumulated total (i.e. since thursday 16 July 12 am) number sold by the end of the day stated on the x-axis.
Note: The value for 17 August is an estimate, strongly helped by @gewuerzketchup’s tracking which I adapted just slightly to account for the (usually very limited) evening instant payment sales (adding 8 is an estimate).

I would welcome if Fairphone would give it some more push soon. Maybe send M. Miquel Ballester on a European road show?

Your OCD is worse than mine my friend! A bar chart no less.

Well, strictly speaking a bar chart might be misleading…makes it look like the bar is the daily number

Now I’m worried that daily sales will decrease even a little more.

There may yet be some bulk sales to come… last time the Phone Co-op in the UK took an order of 1,000 I think with a preference for a further 1,000 (which I think they took).

Also, worth pointing out that there is a correlation between the sales numbers and the marketing campaigns. So I would expect another flurry as the campaign builds.

BTW, I also have felt a little OCD watching the numbers

So tomorrow, when they reach 7.5k, I’m gonna sit on my balcony and drink a fair trade iced tea to this success.

Time for your ice tea, @huskers.

Now that Fairphone made it halfway, i am somewhat confident they will reach there goals. However, to date, some important information is missing:

I guess this is also strategic: That information will probably grab the attention of tech sites and blog and continue to raise awareness. On the other hand, reading here, a lot of fairphone fans hesitate to buy before they have this information. 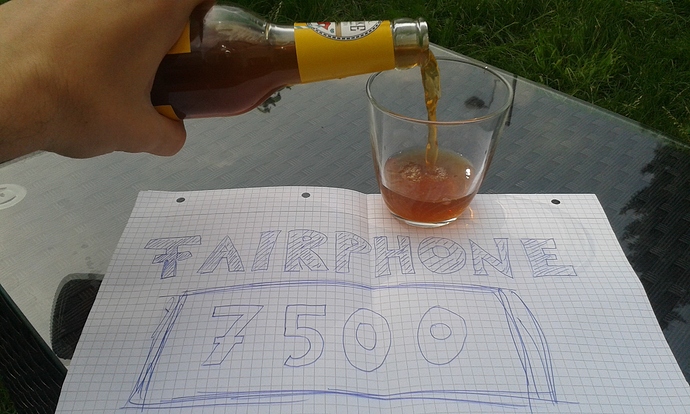 Selling like hot cakes today for some reason; 142 since yesterday evening and counting! Maybe the herd instinct has kicked in (well … if everyone else is buying one …).

I note the cooperative mobile are mentioning the FP2 on their site and taking “expressions of interest”, but they’re not listing it alongside their other handsets, promising they can supply one or advertising a price. If they will do an FP2 as a rental then I’m sure a lot more people would afford it. And it could be good for coop too if instead of handing them over to the lessee after 24months, they took them back and re-furbed for re-lease.

True, realized that after the ice tea was empty

Maybe the herd instinct has kicked in (well … if everyone else is buying one …).

There is always a little “tuesday kick” which I think isn’t actually a bulk of orders being made all at once but the accumulated payments coming in from the days before (i.e. non-instant bank transfers). Obviously, if you order on friday, saturday or sunday and choose a slow payment option, your payment will only arrive on monday or (more likely) tuesday (or even later). In the first days of selling in July, I actually tracked the numbers several times a day and there was always a rapid increase in the counter between roughly 8 and 9 am – I guess someone at Amsterdam HQ

is registering the payments then and entering these orders into the counter in the morning. The (far) fewer orders counted during the rest of day are probably solely those who choose an instant payment option. OCD fix for today √

Haha, that is fairly correct. Bank transfers usually come in in the morning (this is normal for all banks btw ;))

That would be cool, especially in ArnoldC.

I bet there’s plenty of built up demand over here “across the pond”.

maybe there are more reasons why people hesitate to preorder now: