I definitely am an enthusiast. However me opening the website exactly at the time when 14999 was reached, was a coincidence. Don’t you think I’m only a little crazy?

So the ANSWER was a definite YES … with the help of some bulk suppliers - and better them than interest charging banks.

Next question on the same lines is : Will they sell 140,000 … as this is what is assumed in the cost breakdown. Wooo, quite a challenge I’d say. Of course many more are likely to sell once they are out there to buy, but also the real keenies (us) have already paid up … and have no intention of buying another smart phone for a very long time.

Thanks for following the counter, everybody! When all the numbers were tallied, the final special edition number is 17,418 (wow!). Here’s a photo of the team thanking you!! 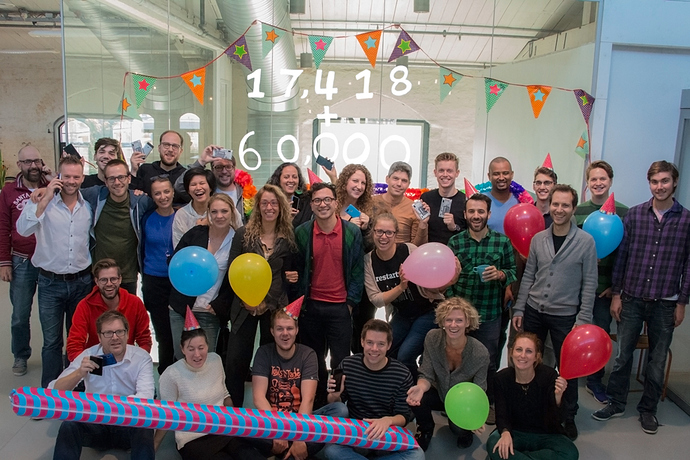 (Hopefully you recognize some of us!)

Probably the most likeable smartphone producer team in the world…

How many Fairphones can you spot in this picture?

How many Fairphones can you spot in this picture?

At least one of them is a FP1, though. 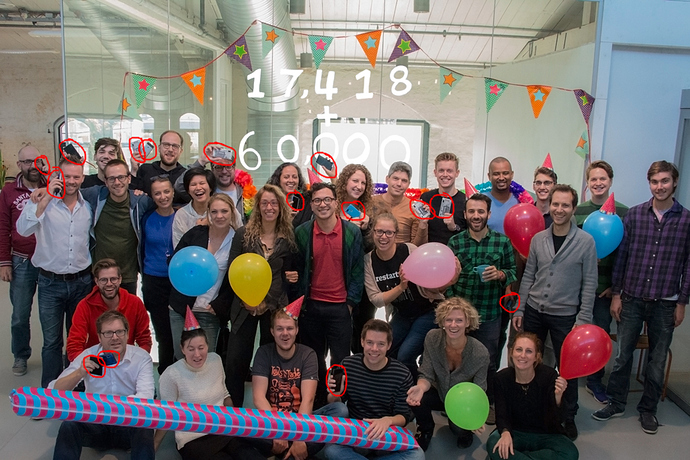 The 17,418 are all the orders placed before the end of September but some are still awaiting payment.
The counter is from all the payed orders.

Wow, this is even more amazing - so many people placing last minute orders.

Haha, I didn’t see the one on the right

Hard to tell, how many of them are Prototypes for the new Fairphone 2…

They are not necessarily last minute orders, bank transfers can take up to 5 days.
And sometimes people also forget to make payment so the number might fluctuate a little bit I guess.

Presumably the number of FP1s sold…

Right, I wanted to order the next day morning of the opening, was #1268, then i should do a bank transfer after the weekend on monday morning, then, it took 3 more days, finally i’m #3245, and pround of it! like all of us fellows !
many years ago Patrick McGoohan used to say (quote) "i’m not a number, i’m a free man!"
Now we can say : I am a number, I’m a free (wo)man !

Now that no more purchases seem to be possible for the time being and payments seem to have been entered and/or taken as a question of when rather than if, my final graph for completeness’ sake. 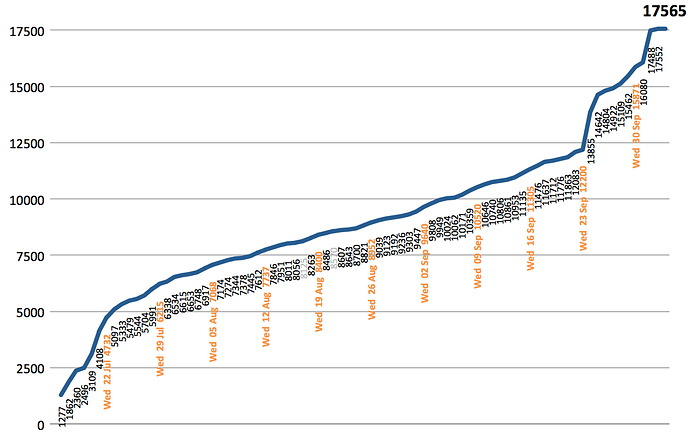 Well, I was a bit premature.

Purchases are still possible, you just need to click at one of the five pictured FP2s in their various cases (on shop.fairphone.com).

Now I understand your last post. Well, there are no more purchases for the special edition possible anymore.
The normal phone itself can be purchuased; maybe it could be made clearer in the online shop. Something like “Please choose your color before purchasing”.
Or what does @Techaddict think?