(sorry if some labels are wrongly named, since I’m using a german phone)

I synced my contacts via Outlook. Now when I first installed WhatsApp I noticed that I have dublicates of some of my contacts, which use WhatsApp too.

Screenshot_20191125-1437131080×2160 66.4 KB
I also tried merging and/or deleting the whatsapp-contacts via several Contact-Managing Apps. But they always reappeared a few hours or a day later, or refused to merge in the first place. I even deleted some of my outlook contacts by accident in the process, which I than had to restore.

I aslo tried to turn off permission to my contacts by whatsapp in gerneral, but than I couldn’t create new chats with persons I haven’t written yet, nor send contacts or the like.

That all would be half as bad, if I just could filter them in the phone app (I’m using the LineAgeOS phone 19.0, which seems to not have this function.

Am I missing something? Is there just no way to prohibit whatsapp from creating contacts on my phone? Do I have to somehow move my contacts into my phones memory (I didn’t managed to) and merge?

I have the same problem with Outlook installed and having additional Whatsapp contacts which I don’t want in my list. For now, I just settled with getting used to it until there are any fixes/updates, knowing that when there are two contacts, the first is always the useless Whatsapp entry and the second one would be the Outlook entry.

I don’t think that this issue is FP3-specific. Just sayin’.

I’m not using Outlook or WhatsApp, so I don’t know in practice how to approach this … but if it was me, I would have a look first at where the contacts are stored with MyPhoneExplorer …

How to root the Fairphone 3?

It’s Windows only as is, but for an earlier version has been reported working on Linux using Wine with connecting the phone via WiFi (on Windows MyPhoneExplorer supports connecting via USB, WiFi and Bluetooth).

MyPhoneExplorer can distinguish different sources for contacts on the phone. 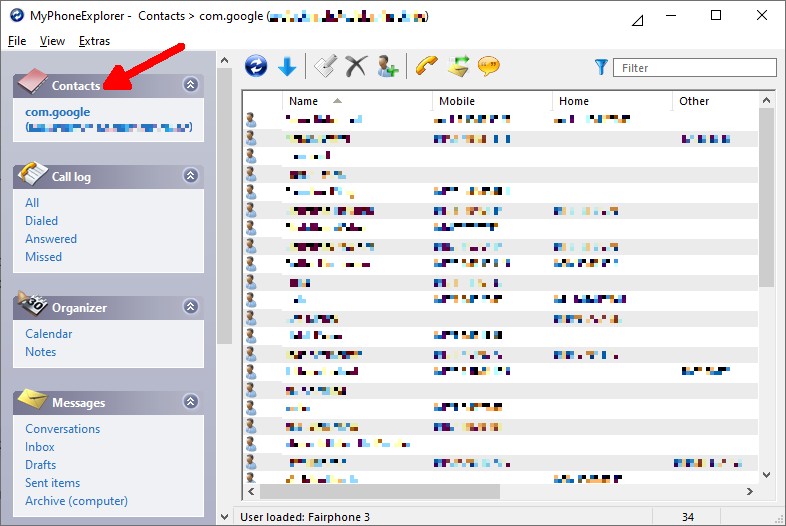 There’s only one source listed in the screenshot, it’s labelled “com.google” with a reference to my Google account even if the contacts are stored locally on my phone.
(The label was different before I temporarily added my Google account to the phone, since then it’s “com.google”, even if the contacts are not synced to Google and the account was deleted from the phone again … whatever.)

Anyway … if more sources for contacts were established on the phone, there’s a good chance MyPhoneExplorer would list them there.

If only one source would be listed, then the contacts really would be duplicates.

But how to consolidate this then in either case, without breaking App functionality … I don’t know.