Music player controls on lock screen. I use VLC and apparently it shows up on the F-Droid lock screen, but not on Lollipop. Coming from iPhone it is a thing I have gotten used to and would really like to see on FP2. It is just so much faster to have direct access to stop, start and shuffle the music that you are listening to while doing other stuff.

Did you have a look at the settings of vlc? I do not use it on the phone (anymore) but I think to remember that you can configure it, to show on the lockscreen as well.

I think to remember that you can configure it, to show on the lockscreen as well.

I think so too and even if not then it’s probably not the fault of the Fairphone OS but of VLC, so I moved this out of the #featurerequests::tag topic.

My VLC displays the controls on the lockscreen. 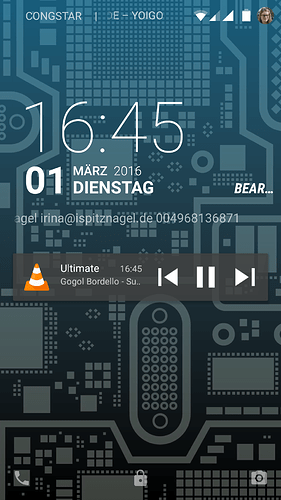 Maybe it depends on the version. Which one do you have? I have 1.7.5 from Google Play Store.

I found it!!!
Settings - Apps - VLC - ticked off the “Show notifications”