I just updated to the LOS version of today (including microg). Now the phone shows me persistently a message saying that validation of the LOS version failed and that now LOScoins are generated. Can I get somehow rid of that? What does it mean? Is it a measure against MicroG?

It jokes about Gobble banning uncertified devices from their Google Mobile Services and —as a sideffect— making it more confusing for newcomers to use custom ROMs (I use microG, so, whatever, but I dislike anything that adds complexity to the freedom to choose). Also about banks apps not working on custom ROMs because of —who could have guess it, right?— SafetyNet.

The “disruptive”, “blockchain”, " game-changer" & co. terms are just plain marketing bullshit language. They are great at criticising their own industry, hahaha.

Can I get somehow rid of that?

"1. Boot in to TWRP-recovery
2. Open Terminal under the advanced tap
3. Type the following

in the terminal
4. Reboot the phone"

I updated the phone of my dads to the newest build, but i get a message which just opsns the latest los changelog. But i still cant get rid of the...

Thanks AnotherElk, it worked! They want their users to get to know TWRP terminal?

EDIT: My question is, are both “LOScoins” and “LineaGenuine” nonsense and supposed to be a joke? Or only the LOScoins?

Thanks for the solutions to get rid of the warning! But I am still interested in why this happened in the first place. The LineageOS we use is “official” in the sense that it is released from LineageOS itself and we download from their servers, correct? But now it is no longer a “certified build”? What does that mean and why not? Will Will later builds become certified or is this impossible for the FP2? Is this related to the device requirements discussed here?

As I read it, the genuine validator is a part of the LOSCoins thing, they both are in the code topic “loscoins” and are being reverted now …

Also, if they were separate things, you shouldn’t be able to turn them both off simultaneously by setting “nofool”, I guess.

Can somebody please look at the notification text(s) (can’t enable it again just now), I’m pretty positive the connection between the two things was somehow given in the text(s), too.

Can somebody please look at the notification text(s) (can’t enable it again just now), I’m pretty positive the connection between the two things was somehow given in the text(s), too. 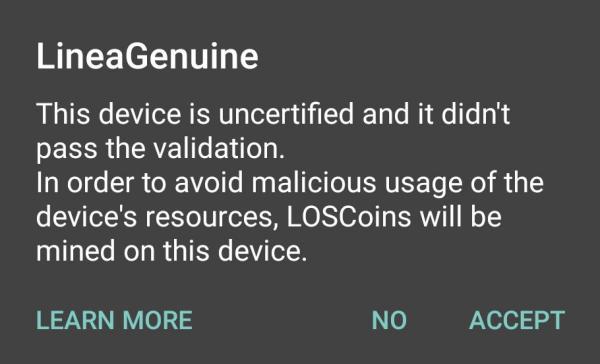 se look at the notification text(s) (can’t enable it again just now), I’m pretty positive the connection between the two things was somehow given in the text(s), too.

Even with the message disabled, I still have a “Wallet”-App for “LOScoins”…

Even with the message disabled, I still have a “Wallet”-App for “LOScoins”…

Well spotted, I didn’t see that … let’s see whether they remember to uninstall that with the next build.

So I had to explain to my mother in law what this all was. So much fun…!

It seems to me it’s still a lot of work to develop a full b*s**t app just for April 1st…
Is that LOSCoin a real thing (that I could understand to get some financing) or just a joke that takes some space on my device (I disabled it though)? 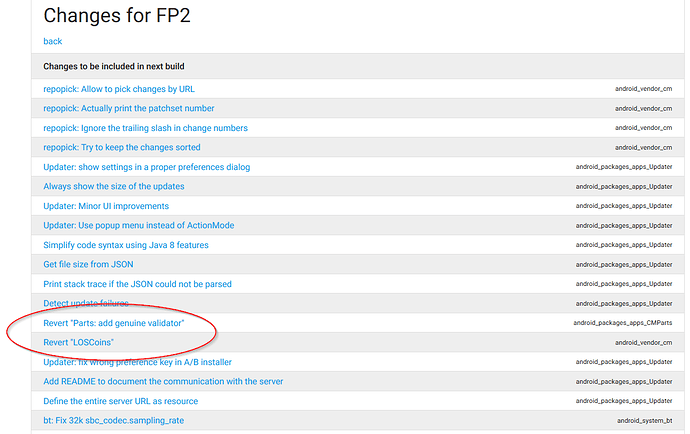 It will be reverted in the next build

“To our users, we apologize and promise to do better next year.”

I will certainly do better next year, too, and not install the first build that comes around in April … if I manage to remember

Well spotted, I didn’t see that … let’s see whether they remember to uninstall that with the next build.

For the record … With the new build, the fake Wallet App is gone along with the other April fools things.