Try leaving the battery out for 5 minutes to reset the battery stats and clean your (dalvic) cache through TWRP. Maybe this will help.

Thanks. I did that. Very minor improvement.

After the last update the WLAN-search was reactivated. After disabling it (Settings -> Location -> Menu -> Search -> Disable WLAN-Search) my battery drain isn’t that high anymore.

@paulakreuzer:
The start post is quite dated as most issues described there are fixed in the OTA release.
Can you update it?

Well I don’t think it’s a good idea to maintain two posts/wikis that both list the same stuff, so I edited the post to make it more clear where to look for an updated list of issues.

Weather provider or settings problem:
When I installed the older build from here I had it quickly configured so that the lock screen displayed the current weather of my user-defined location. I thought that was quite neat.
Now that I’m on the newer OTA build from here, I somehow fail to recreate that.

I can’t enter a user-defined location anymore in the Widget settings.
Everything I enter there almost immediately throws a generic “location could not be determined” (if that is the English localization) message, the same that you get in map Apps still having to fixate your location.
With the older build, when I entered a city, I would be given a choice of locations if there were more than one places matching my input.

Has anybody got anything like this working with the OTA build?

Edit: Never mind, I uninstalled the weather provider, installed it again, and now it works 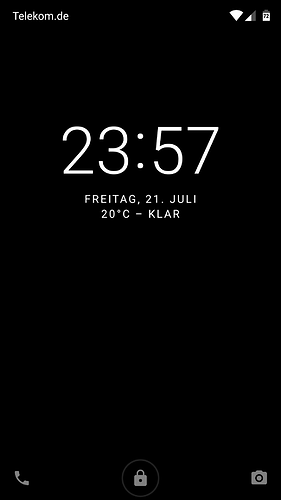 Just a quick message: yesterday I did a travel by car with OsmAnd~ navigation and it was a pleasure! The experience was awful in FP Open, with reboots, overheats and incorrect compass. Thank you all for the awesome work,

three hours ago I started encrypting my phone. It said it would take more or less 1 hour. Now it seems to start up again and again. Is this part of the normal process and should I wait some time more or should I break up the process of encrypting?

Is this part of the normal process and should I wait some time more or should I break up the process of encrypting?

No, this is not normal. Which LineageOS build did you install?
I first tried encryption with the build linked to at the beginning of the Porting thread and ran into a bootloop.
Next time I installed the newer build from the OTA thread and encryption went fine.

@AnotherElk ok, tnx! I think I have the same build as you started with. What should I do now? Can I just pull the plug and shut down the phone and install the newer build later on?

What should I do now?

Here’s what I did then:
Force-shutdown the phone (very long press Power).
Boot into TWRP, wipe everything, format data.
Install the other LineageOS build.
Immediately encrypt the phone, it will not take long since data is almost empty at this point

.
Edit: Check whether encryption works by rebooting into TWRP, it should prompt for the encryption password and decrypt data with it.
Edit: Boot into LineageOS, restore my data from backup.

again! I got the threadfile. Now adroidfilehost advises me to check the md5. Where should I find that number? I can’t find it… Also, the file is actually 15MB bigger then it should be according to androidfilehost. Is this something to worry about?

Is this something to worry about?

Not because of MD5, but because I think you should follow the instructions of the “When coming from any other OS” section of this post

The one thing I find hosted on androidfilehost is the older build that gave me (and probably you) trouble with encryption, so that doesn’t sound helpful.

Why should I actually follow the “When coming form any other OS” section? I thought in my case I have to follow the version “when coming from @chrmhoffman’s build”.

Why should I actually follow the “When coming form any other OS” section? I thought in my case I have to follow the version “when coming from @chrmhoffman’s build”.

If you completely wiped your phone and formatted data (like you should do just to be safe after an incomplete or otherwise broken encryption attempt), you’re not coming from any build

Hey folks, I tried to do the “LineageOS 14.1 with OTA updates for FP2” and then followed the instructions from “When coming from any other OS”. I got stuck at the fastboot method. When I type
“adb reboot bootloader” in terminal and then press enter I get the following text: “-bash: adb: command not found”. What to do?

Did you follow the the fastboot method link in the post? And did you on the linked page then follow the You will need the platform-tools from the Android SDK on your computer. link in the “Fastboot Install Method (No Root Required)” section?

Try fastboot instead of adb.
Or hold down volume down when turning on. The FP screen with the logo remains then.

adb (and probably fastboot) are not installed or are not on your path. Check whether your package manager has them for the easiest installation method (as this should add them to path). Look for android-tools, though some distros split them into e.g. android-tools-adb and android-tools-fastboot.

Hey! I also couldn’t get fastboot going, because I’d never used it before. Coming from Fairphone Open 5, I installed the TWRP app, and used it to flash TWRP_3.1.1-0-ota-fix.img to the recovery partition. Then I booted into TWRP to flash the modem zip, lineage, and opengapps, following the instructions from the forum. And it had been great since!
Has anyone else had success in doing this instead of fastboot? I think this helps open lineage to a wider audience