Sideloading fp1-kk444-CH-0.1.zip works, that’s all I can say for now (with your recovery). Maybe a screenshot is easier. Thanks for showing that 4.4.4 is possible. 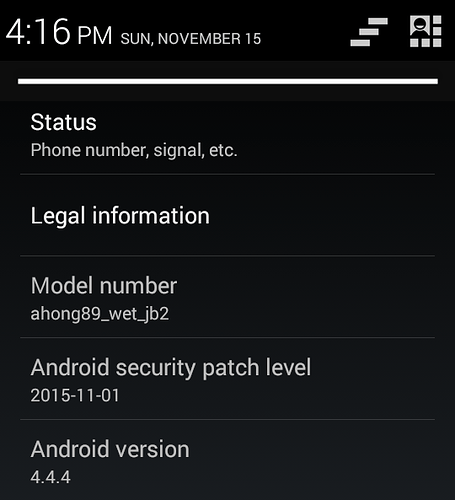 Would you suggest switching from CM to the new build?

Will you publish your sources so we can use it for an updated cm build as well?

[Recovery] I like the ClockworkMod Recovery much better than the standard Android recovery. Can we keep that one or are there possible licensing strings attached? I guess the ROMs won’t mind which one we use, but CMR is much easier to use and navigate (up, down and enter work like expected), so I guess it’s also better for “normal” users. It also allows quick full backups.

For people that look for a howto for the FairphoneHome.apk

but you have to restore your widgets (I didn’t find a way to restore them with TB yet!)

I have some problems running OpenCamera and Barcode Scanner, they crash and are unable to open the camera device, I’ll investigate further

For me restoring widgets with TB works.
I restore the App datas of the Widget-Apps & the Launcher, the I restore “Homescreen Widgets” and the I restart the phone.

Thanks, maybe it depends on the sequence of restoring, because I restore the same things but I don’t have the widgets on the screen, only the app icons and the contacts…

Hi allz
Step by step installation of stock rom android 4.4.4 for FP1 & FP1U is required for common users like me. because i do not understand how to flash or upgrade my FP1U (repartitioned). Thanks

i do not understand how to flash or upgrade my FP1U

To be honest, then this unofficial ROM that is still very much under development probably isn’t for you quite yet. Wait a bit longer for the version to become more stable (so you don’t end up flashing a new version every couple of days), or wait for an official update (though there is no guarantee that there will be one). If you do want to play around with it read this thread and the thread over at XDA - together with the pages linked from there you pretty much have a step-by-step guide. Before you start please note:

This is a completely unofficial ROM and the forum here is unlikely to be able to solve problems that result from using it and FP won’t support this either.

So if you go down this route know that there may be help, but you should assume that you’re pretty much on your own if/when something doesn’t work.

Also, from the XDA thread:

PHONES CAN BE LIFE SAVERS. DON’T RELY ON THIS PHONE AS YOUR SOLE COMMUNICATION MEANS.

Hence the emphasis on play above - don’t depend on a device with a custom ROM. Only use it if you can afford to lose that phone and the data on it.

That being said, here’s some points to get you going:

Best of luck, and if you find any bugs that haven’t been reported in the XDA thread or here, please report them!

I have some problems running OpenCamera and Barcode Scanner, they crash and are unable to open the camera device, I’ll investigate further

I blocked too much /proc access so they were unable to open the camera device properly.
Bye!

haven’t looked into it, but this install guide for CM 11 should work alright for stock rom as well I’d guess. Just switch rom and just to be sure recovery.

I tried to install through recovery but it failed (I have FPU1 though). Sadly, I just went live with my Fairphone so no more testing for me but I'm interested to see how the development goes.

Yep, I can also report back that the camera worked with both ROMs. I forgot to report that here. I guess it’s better to remove XPrivacy for testing (just don’t install the 2nd part) because 4.4.4 brings it’s own system … I don’t think’s it’s better, but for testing

Just about ready installing this great piece of work. Had to retry flashing 3 times and to wipe the data partition (has been encrypted before).
Everything seems to work fine right now, and: snappy!

Have a bit of trouble with the location of my osmand maps / can’t access sdcard, but that’s another story I am afraid.

Hi Allz… I installed Stock ROM 4.4.4 in light of instruction posted at XDA forum in my FP1(U) via CWM. The phone working great but sometime the upper slide does not work and I have to restart my phone. I don’t know why? May be expert can solve this. I also tried video recording / photo and work fine. I installed Google Play Store on the same method described in XDA forum. Thanks to all who created this nice stuff. Phone restart faster than its original rom. I did not check my phone thoroughly but I hope it will work fine. Thanks to all brothers

Only from osmand. I will explore, don’t bother yet. Maybe I typed in the wrong location. Will try the new Rom tonight, great work, no errors yet for me

Edit:
Osmand works as designed, had to open the access to the storage using sdfix.
Testing 4.4.4 now

So far I found the following problems with latest 0.4 on FP1 (first edition):

Confirm#2 and#3, and #4. No application history for me either

Still on 4.4.2 I confirm 1) and 3) from @ralf_xda post, I also add that for me 3) is a bit different: it seems the home button gets the event of a long press but there is a 3-4 seconds delay before showing the list of active apps (like a 3-4 seconds freeze).
I add two (I think) useful information: