Unable to set SIM card to use 2G, is there a solution?

My Fairphone 2 has two SIM cards, one from a finnish operator Telia and another from O2 in UK. Apparently only one of the cards can be connected to 3G/4G at a time, so when I have both plugged in, the Telia one seems to default to 2G since I always have only an EDGE connection on that card. This is despite the fact that in Mobile network settings -> (name of the card) -> Preferred network type: “4G (recommended)” is chosen.

Is there any solution that would enable me to use both cards and to have a fast connection on the Telia SIM? I would choose 2G as the preferred network type on the O2 card, but the only options are 4G and 3G. Turning off mobile data on the O2 card doesn’t work. Turning off mobile data on Telia card, and then trying to find a 2G option for O2 card doesn’t seem to work. I can’t disable or enable any SIMs, since the newest Fairphone version 7.1.2. doesn’t have that option. I also heard that many Mobile Virtual Network Operators don’t support 2G, but O2 is not an MVNO, and according to their coverage map they have 2G coverage at my address (in London). I tried calling O2 but they didn’t seem to be able to help.

Edit: Trying to connect the O2 SIM to 2G network with only it inside the phone doesn’t seem to work either. According to O2 it should be possible.

Update: I tried the O2 SIM card in a newer phone, and it didn’t let me connect to 2G there either. 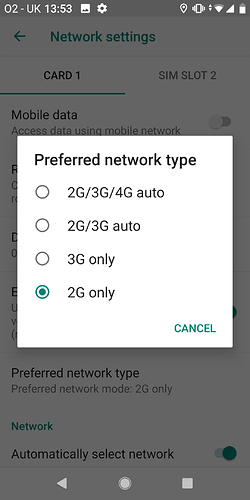 Unfortunately I don’t have that option. I can only choose 4G or 3G. This is in Settings -> Mobile networks -> Preferred network type (screenshot is from when I had a card from Giffgaff) 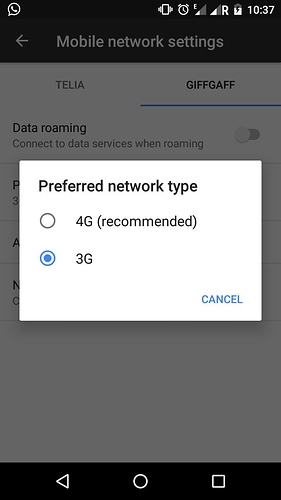 Please accept my apologies for not reading your query correctly as you clearly stated FP2 not FP3 as I wrongly assumed. O2 were correct in information given but not when applied to FP2

All good, and thanks for the attempt

Have you tried to swap the SIM cards with each other?

As in, swap their places? I’ve tried them both ways around, and I’ve also tried using only the O2 SIM card.

Do you have an opportunity to test the sim card in another phone to see if it offers you the 2G option there?

Edit: Also tried with a giffgaff and an O2 SIM. Seems that neither of them can connect to a 2G network and thus the phone displays there being no SIMs inside.

the phone displays there being no SIMs inside

This means that no SIM cards have been recognized. Not sure if you are confusing this with “no service”.

I think the former. There was an icon in the status bar showing a single SIM card being crossed out, and I couldn’t access any of the settings for any cards.

Then you either have a problem with your SIM cards or the slots in the phone. Check the cards in another phone to see if they work fine. If this is the case, probably the SIM card holder or the core (or both) is (are) defective.

There could be a problem with the SIM cards itself. If they can be set to 2G in another brand phone, it still is possible that they don’t work in a Fairphone.
Just to be sure. Is the 2G network still working for Giffgaff?

Unfortunately I don’t have another phone available to check them with. They should be fine though, they were brand new and I’ve tried three different ones (2xgiffgaff, 1xO2) that all have the same issue. I suspect the SIM card holders are fine too, since I was able to connect to 4G and 2G fine when I had two Telia SIM cards in.

Unfortunately I don’t have a phone available to test the SIM cards in another phone, but they were brand new and I’ve tried three different cards (2xgiffgaff and 1xO2) so they should be fine.

What do you mean by “Is the 2G network still working for Giffgaff”?

I think she means to ask whether Giffgaff still has a 2G network. Some operators are phasing out 2G.

Not sure if this actually can be taken as evidence for the according network service. 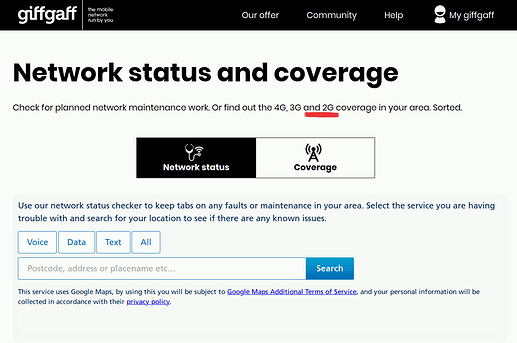 Oh yeah, at least according to giffgaff’s and O2’s coverage map and customer service agents I should have 2G coverage.