Repairing an unresponsive touchscreen - the fire fix (⚠ slightly dangerous, will void your warranty)

this will void any warranty you may have whether or not it works. It involves fire and heating up electronics , so it may in fact damage your screen and make things worse . Be careful, don’t burn yourself, and also don’t burn down your house, street, neighbourhood, town, region, country, continent or planet, please. Keep a window open so that there’s good airflow and you don’t inhale anything that’s bad for you.

If you’re uncomfortable with the procedure described below, or if you’re a kid, either just don’t do it or get someone who knows about safety to help you . Only do this if you have another screen at the ready, because there’s a chance this one will get overheated and stop working . This procedure does not come recommended by anyone, even by me, but it did work on both occasions that I’ve used it.

Read at your own risk! Please turn off your computer now and never turn it back on! Step away from the forum with your hands where I can see them!

I had two partially unresponsive FP2 screen modules laying around in my box of spare parts, and I figured some experimentation wouldn’t hurt. May as well try to fix them before recycling them, after all. One had a 1 cm wide vertical band that didn’t respond to touch, and the other had three such bands.

Now, when we were kids we used to fix Game Boy screens with malfunctioning pixel columns by leaving them in the back of a car to heat up in the sun, or by holding them over a hot stove. The heat loosens up the various binding agents, allowing contacts to resettle and make contact where they didn’t before. So the pixel columns came back, and as Fairphones are essentially just more expensive Game Boys, why not do the same?

So I took a screen module, and held it (with a hefty oven mitt) above one of the burning gas jets of my stove, at a height of about 40-50 cm. I kept it moving so as not to overheat any one area of the module. I held it screen side down for about a minute and a half, after which I switched to screen side up, more briefly this time. Be careful with that last bit, as the plastic parts can melt if they get too hot. When the screen module was heated through and too hot to touch, I laid it down flat, screen side down (on a heat-resistant, non-scratching surface!). While it cooled, I placed a folded up tea towel on it and pressed down on it with my palms. I don’t know if that last bit did anything, but I did it anyway.

After letting the module cool all the way down to room temperature, I attached it to the phone and bam, there it was. 100% responsive, good as new.

I have now done this to both of my defective screen modules, and they still work 100% flawlessly after three days. One has been in use in my test bench FP2, the other one has been stored away and I successfully tested it just now. This procedure probably hasn’t done the longevity of these screens any favours, but they can now be used as spare parts in a pinch - when someone’s waiting for a new replacement or can’t pay for a new module.

18 Likes
In need of a FP2 Display
Weird light area on screen after spilled drink on FP3
FP2 - screen not working due to water. Advice sought on repair
urs_lesse September 9, 2019, 4:55pm #2

@ElKrasso once described a similarly daring procedure (involving the core module though), but using a normal kitchen oven.

I am lucky that I only have trouble with these pins at work. There is one thing you could try before you swap your core module. It is a dangerous action, but if you do not have anything to loose it is worth a try. I guess you have (a) broken solder joint(s) on the pogo pin(s). Resoldering by hand would be hard, moreover most people do n…

Weak sauce! I’d use a flamethrower but I believe they’re illegal.

Read at your own risk! Please turn off your computer now and never turn it back on! Step away from the forum with your hands where I can see them!

Well, reading your post, my first reaction was: how many first generation FP2 displays have an unresponsive touchscreen? It seems that there are a lot, and the problems are confirmed by the existence of a second generation of display. It really seems that the the first generation displays were faulty.
Mine just started being unresponsive on the right part of the screen, a vertical band as you say. I have to rotate the screen to be able to use some letters or to activate options in some apps. The problem is that the phone was exactly 3 years old when it started. So no warranty (even if it really looks like a faulty manufacturing) and the support advises to send back the phone, saying that I should be prepared to change the core module…
I seriously doubt that this has something to do with the core module and it may lead some users to ditch the phone and buy a new non-fair phone for the same price.

It seems that there are a lot, and the problems are confirmed by the existence of a second generation of display.

No, they aren’t confirmed that way, at least not this obviously.
According to Fairphone the new display generation became necessary because of supply chain trouble …

Supply chain stories: What happened with our phone displays - Fairphone

Phone screens break sometimes. Even when designed to be durable, and lovingly cared for by their owners, sometimes a phone just gets unlucky. The glass is tough, but not unbreakable – and you can find a lot of phones with cracked displays in the...

Yes, it may be a shortcut, that’s why I asked some questions at the end of the message to have your feeling about the extent of the issue with second generation displays. My feeling (but only a feeling) was that the issue affects mostly first generation display because (but I might be wrong) the number of posts about this issue decreases. There are other explanations as well, but I had the feeling that the numbers were high enough to make the hypothesis that the second gen are less subject to unresponsive areas, while the first gen were highly touched.

. I have an issue with an FP1 screen and it sounds similar.

What temperature do you think I need to heat the screen to? Could I try and oven at say 50 degC? I’ve attached the #touchscreentest for my FP1. There are a couple of areas that don’t respond as well as most of the edges. Does this look like the issues you had with your FP2 displays? I’m getting a phone dismantling kit for Christmas, so planning on taking the FP1 apart to attempt a repair 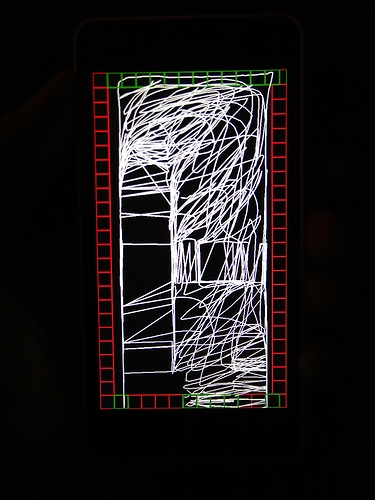 Looks like the same issue, yes, so there’s a chance this method will fix the problem. Difficult to say the temperature at which I heated my screens… so hot that it was painful to touch them for longer than a second or so, while taking care to heat no part of the screen much more than that.

I’m going to experiment with my oven soon, so I’ll report back from that when I get to it.