I had been using cyanogenmod for a longer time and I was always very happy with the pre-installed audio player. Something I miss now on the Fairphone 2. The audio player there was called previously Apollo and later Eleven. Unfortunately those apps are not available during the play store.

Does anybody has a recommendation for a good audio player for browsing and using a larger set of audio files (hundreds of albums).

But i’m also testing a new one, i bit more innovative who is called Encore.

To know more about this player:

I am using Timber now - also on F-Droid.

Thanks so far for the answers!

Timber looks nice so far. More or less the same, than what I was used too.

I did not know, that there was an Apollo App on F-Droid (I did not know what F-Droid was anyway …). But the last update was in 2013. So I it looks deserted …

Vanilla is also another great player. It is open source, light, fast, very convenient. Available on FDroid too.

I did not know, that there was an Apollo App on F-Droid (I did not know what F-Droid was anyway …). But the last update was in 2013. So I it looks deserted …

I noticed this as well, but Apollo seems to be deprecated anyway (in favour of Eleven). You’ll find a younger “non-official” version of Apollo on Amazon or another one in the Google Play Store. There is also the Cyan Apps package, though I don’t know if that will include the music player. The newer Eleven music app is also not easily available. I only found source code on github and an .apk seems to be around on mediafire.com. Though personally, I would never install a completely unknown .apk from some arbitrary (e.g. mediafire) source.

I am quite happy with the VLC Media Player. It also supports video and tons of formats. Link to F-Droid.

I’m getting along with Phonograph, but these are all good alternatives worth considering. Thanks guys!

I like BlackPlayer so much that I ended up paying for the extended version. The basic version is free and already contains everything a good player needs. Best!

8 posts were split to a new topic: Apollo app crashes

I have tried a couple of players, but with none of them I have been able to get a simple file list (like in a file explorer) in order for searching my music library. Just annoying sorting by interprets, albums, and the like.

Anyone with a recommendation for a player where you can simply browse your directories and files in the music player?

VLC Player can do this

Will try it out!
I used VLC so far only as video player, never for music (which is why I didn’t consider it yet for my mobile device). But I’ll give it a shot

Edit: Oh yeah, that was what I was looking for. Thanks again for the hint!
I got so annoyed last week while traveling when I had to look for the directories I wanted to listen to … This will save my nerves on my next trip

I’ve been using Orpheus recently: https://play.google.com/store/apps/details?id=org.opensilk.music
It’s FOSS but still in development (beta). It supports Folder structure, though it’s not perfect in terms of usability imho.

I hate to advertise proprietary Software, But I simply like Poweramp by far the most of all those players I have tried. It also Features a folder view which is not like a classic directory Browser. However You might possibly like this one too. I’ll attach a screenshot. It shows You every folder that directly (!) contains at least one music file, and lets You choose whether to sort the folders by name or directory. 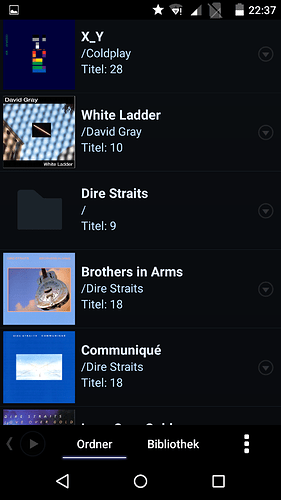 You can also switch to this view which (I think) allows You to play the Audio of any folder including subfolders. Should be similar to standard directory browsers. Please note: My music directories Are Set up like this: /music/ARTIST/ALBUM. That is why in the second screenshot the Band names appear. 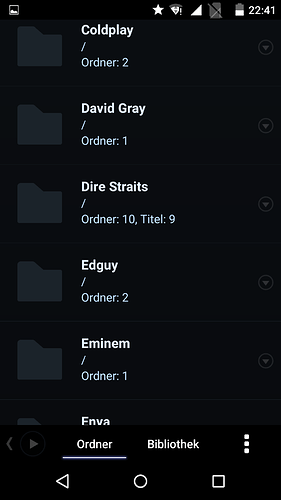 Thanks a lot for for your hint!

For me, though, an app not being available on f-droid is already a big down side. For now I think I am happy with VLC. To be honest, I don’t even see the difference in all these players (aside from my question obviously, that not all players allow directory view).

As far as I can see from the screenshots in the play store, Poweramp also cannot do any more than other players?
Besides, in my opinion there is not much a player needs to do: Show me my files, and play them when I click on them. Pretty simple task, really (yet many players have failed)

Just a quick update: Phonogram gave me some problems (in particular while trying to use it the app crashed and caused the phone to give out a long, scream-like vibration before finally shutting down), so have switched to RocketPlayer, which is far more agreeable and works well with the iSyncr app made by the same company to get my music from iTunes to my phone. Definitely recommended!