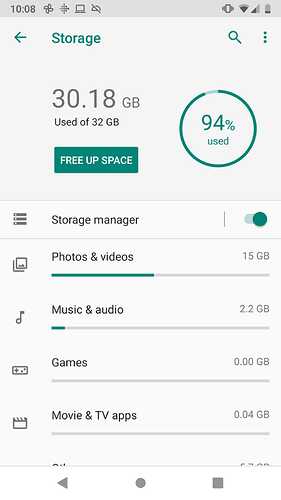 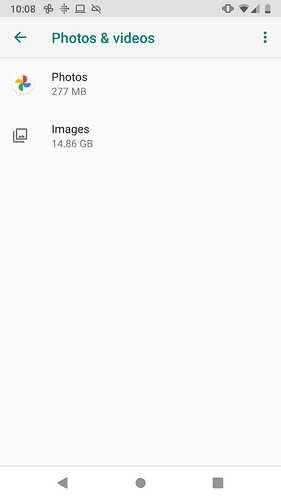 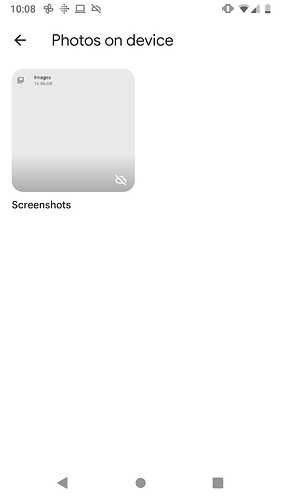 The only files there are these three screenshots.

Does anyone here know how I could fix this? Having so little internal storage remaining is not good for my phone.

I’ve read a similar issue somewhere, it was the picture folder of a messenger like WhatsApp or Signal.

Thanks for the quick reply!

I deleted all WhatsApp images and videos as well, and did the same for other apps. I deleted everything that was under the 14.86 GB of images. (Or well, I tried to at least.)

It was this thread, in German sorry:

It was the Telegram cache on a FP3.

Please browse one page back (from the screen below) to Settings > Storage and make a screenshot. The SD card should be listed there. Your SD card might be set up in an unfortunate way.

Are you on Android 10 (the most recent big upgrade)?

For more on the (suspected by me, yes) SD card issue, see:

Android 6 introduced new options for using an SD card in your phone. When you format an SD card or insert a new SD card, you’ll have two options: Internal/phone/adopted storage or external/portable storage. The option that most closely matches older Android versions is the external option. There are a couple of things to take into account when choosing which option works best for you: TL;DR: Formatting as internal will allow you to store apps on it and have it encrypted with the system interna…

@Incanus Thanks! I can read some German, so that’s not a problem. I’ve tried removing the cache from some of my apps, but so far no luck (I’ll try more later).

@urs_lesse I’m honestly not sure how I set up my SD card - it’s been a while. It’s very possible I’ve set it up as internal storage. Here’s the screenshot you asked for: 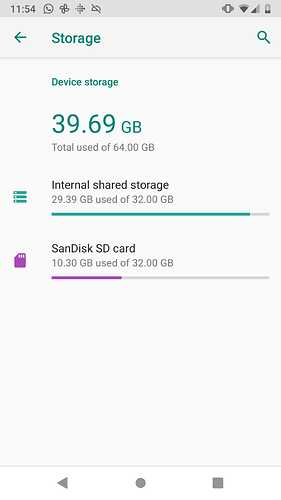 It turns out I’m still on Android 9. Do you think an update to Android 10 will fix things?

Thanks for the screenshot. Yes, indeed, the card is formatted as internal storage (if it wasn’t, there would be an “eject” button and an extra line “Portable Storage” in between the green and the purple lines).

I take it you already backed up everything? If yes, you should re-format the SD card as portable storage (this deletes everything on the card). Definitely get this done and free up a few more GB on the (built-in) internal storage before the big upgrade. The upgrade needs some space and wiggle room, so it’s key to have enough free space before the upgrade.

This seems to be the solution indeed!
After I reformatted the SD card, all the images I’d (seemingly) already deleted, showed up again on internal storage. I’m in the process of deleting them now, and that’s really freeing up space (am at 22 of 32 GB now).

Thanks for the help, @urs_lesse and @Incanus !!

As you guessed, the update isn’t available to me yet. I have Fairphone Updater 1.50.4, but see no way to update it to the latest version. Think I’ll just have to wait a little while for the update.

But my storage is back to normal and my phone too, so I’m happy