If you want to see, feel, touch and play with a Fairphone 2, that is possible at the places indicated in this map.

We added sales points (FP2 for sale), showrooms (FP2 not for sale) and exhibitions where the Fairphone is to be seen, touched or where you can really toy with it.

Want to find out where the nearest point is for you? Read the article and click away! Let me know in the comments below if you have anything to add.

Do I conclude some unannounced news in the map there, Fairphone being offered by mobilcom-debitel?

Or is that old news that I somehow missed altogether so far?

P.S.: I now see that the deal must date back at least several weeks.

but it’s the sole source (other than the offer on the mobilcom-debitel website) I found for it. And as you can see, it’s just an implicit announcement: 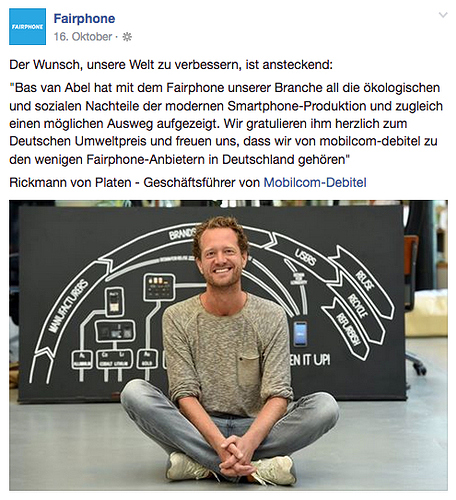 The symbol next to the date stands for “Benutzerdefiniert” (not sure about the English equivalent, maybe “custom”?). It’s not specified to whom it’s limited.

Maybe only for Germans? Not very transparent, Fairphone!

We indeed had a soft launch there, I’ll ask @Douwe to look at the fb settings

It is very likely that this post was limited to Germany only. As the Facebook algorithm limits the organic reach of posts, we want to make sure that the people the post reaches is as relevant as possible.

I’m not German, but I’m in contact with Germans that I could have informed of the Mobilcom-Debitel launch. I don’t understand why there was no other communication about this partnership (blog, was there anything on Twitter)?

We did indeed first do a soft-launch as the Fairphone 2 was only available on their website. From today (!) the Fairphone is also in their stores. We’re finalizing the press release at this very moment and will release it today or on Monday, announcing this partnership.

Then it will also be on the twitters

Thank you for the explanation.

Also note that they didnt start selling in october, they are only starting now… but they made a press release congratulating us for the german environmental award and announcing that it will be available.

Many thanks for this very useful option. I am a bit surprised of how many locations are already there where (potential) customers can come close to a Fairphone. Approaches against staying a niche product are vital I think.

There is an incorrectness though concerning the location of the “Mobilcom Debitel” shop in Ludwigsburg.
The address is correct, but the location shown is wrong. “Kirchstrasse” may also have phone shops, but corresponding to the given street name “Heinkelstrasse” the location must be pointing more to the north-west. I believe the store is located in a large shopping mall called “Breuninger Land” which would be at least more than 5 Kilometers away from “Kirchstrasse”.

Thank you Patrick! I dragged it to the shopping mall location (which is the correct address). Let me know if you spot any other inconsistencies: google maps does some strange stuff reading locations sometimes, especially with shopping mall addresses.

Oh disappointment! I thought it would be a map of the phone and tell me how to use it. I have had mine for 10 months and still find it hard to work my way round, - its my first smart phone and I am prob. an elderly user. Oh well. I will keep on learning and trying. Good luck with sales.

I may have the very first FP2 un North America!
I was part of the preordered ones, received it just before Christmas last year, and went to Canada right after.
If someone in Montreal want to see it, contact me through the forum.

I may have the very first FP2 un North America!
I was part of the preordered ones, received it just before Christmas last year, and went to Canada right after.
If someone in Montreal want to see it, contact me through the forum.

But you are not the only Canadian who has a FP2. We also have a Canadian community here.

Thanks for letting me know that