I have the same issue than @Farkas with Open Camera on Fairphone Open OS. I thought my kids were too fast

I get the same, and I’m really reluctant to try LineageOS just for this feature. I like to play around with software, but also really need a reliable working phone that I don’t break!

I use Open OS, and I got a delay with the stock camera app, and google camera. I tried a lot of other apps but still slow.

Ok, then perhaps Android 7 does this better and you could try LineageOS.

I could upload the original images to your Dropbox. I am sure the forum compressed them a bit.

Nevertheless, a great analysis! That you!

I did not order a new front camera. Don’t really use it.

13 posts were merged into an existing topic: New camera, no flash, no torch light

Received my modules 1 hour ago, the quality in low light conditions is far better (easy…), see the noise in these comparative pictures. 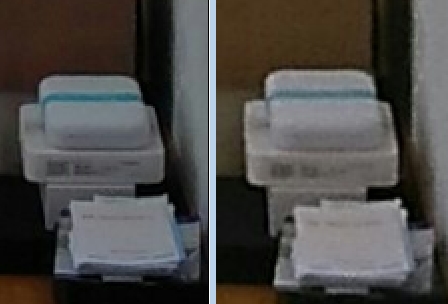 @RobertGraz, just made a quick and dirty test, I would say the flash works well (OpenOS).

The sensor has two types of output format:

Are new FP2s shipped to the customers already equipped with the new module?

Thanks! Where did you find that information? But that’s the sensor, there’s more to a camera module than that, right?

I’m not familiar enough with the Android system to know if this means if third part apps could access these modes, or if there is some driver between the hardware and the Camera2 API that could force JPG output. This quick google result seems to suggest that RAW data access should be possible, is that correct?

Hey Ben, you’re right, the forum compressed them, but more importantly resized them!

While this doesn’t affect the conclusions about white balance and channel clipping, the noise-question becomes trickier to answer (I edited my reply to avoid people being misled later). So I would like to have a look at the originals, yes

So you mean this is due to the version of Android ? But so strange that just a few people are experiencing my issue ? Or just no one cares about having this instant pictures ?

Anyways thanks for the advice.

Will the new camera module be in the new FP2 batches? FP2 Help

Hi there! I bought a FP2 on June, expected to ship by 31 october, and I was wondering if it will have the new camera module, or if I will have to buy it separately. I would prefer to get the phone directly with the upgrade, because otherwise I will find myself with an useless old camera module...

I’m silently hoping that the headphone jack produces less noise on the new top module. That would actually be my first reason to buy a new module as opposed to the camera quality.

Can anyone with a new top module test or compare the noise of the headphone jack?

Having my new modules build in for 10 minutes, I just tested the headphone jack. It sounds good. But I wasn’t unhappy with the old one either…

New FP2 camera and new FP2 top module arrived in Germany. Assembly and disassembly of old new modules went smooth, FP2 powerup detect new modules and showed a bluish notification on Android 6. Took a normal picture with the new module but I am not a photography expert, dont axe me any fancy questions ;). Thanks go to the FP2 team and everybody involved. Cheers.

Remember to change the resolution of the camera for best quality. I my case, it did not change automatically.

6 Likes
Disappointment on FP2 after 3 years with ongoing problems from the beginning
ungutknut September 9, 2017, 12:12pm #89

I’ve just installed the new FP2 camera and it works quite well. But I’m unfortunately unable to do any compareable shots as there’s no way to fix the shutter speed and there seems to be a bug in exposure lock on open camera.

But from what I’ve observed so far:
) The view angle seems a bit wider now. Anybody knows what’s the (equivalent) focal lenght of the old and new camera?
) The Hi-ISO capability has increased massively. The level of detail on ISO3200 can compete with the LOD at base ISO on the old camera module. However noise is much worse on that setting of course. Maybe it’s just a less agressive noise reduction (which is great IMO) which again makes it almost impossible to compare.
) Subjectively I’d say that Hi-ISO noise is now better for about 2 stops.
) Dynamic range hasn’t increased as much as I hoped but I can hardly tell without being able to lock the exposure settings. However it is definitely better than before. Maybe half a stop or one and a half?
) White balance seems to be a bit more yellowish now at the same settings.
) Starting the open camera app is slow as hell. With the old module it already was a few seconds. Now it’s about 2-6 sec. (it varys strongly) until I can take a picture. Thats super annoying.

As you can see I wasn’t able to lock the exposure on manual ISO with the new camera. Usually I do this by tapping on a spot on the screen that I want to have exposed right (in this case the little plant on the speaker) before releasing the shutter. Now it seems there’s no compensation in shutter speed for the manually set ISO anymore. Looks like a bug to me.

Hi Fairphone team, I just tried to order the camera but https://shop.fairphone.com/en/spare-parts/fairphone-2-camera-module says “coming soon”. Presumably it has sold out? When will there be new stock available please? My daughter has a Fairphone and I want to buy one for her birthday, which is soon. Once we get her feedback myself and my son will probably upgrade our Fairphone cameras too! Or, is it available in the UK from the Phone Coop? I know they sell the phones but dont know if they do the parts as well. Thank you for your help.

Yes! If you buy the fairphone now, you get the new camera

Nice post, and good pictures. Do you know if panorama pictures is a possibility, what software to use. Would love to see a sample of one!