New contacts not being saved

My phone no longer stores new contacts. Whether I add them on the address book, whatsapp or the messaging app, the result is the same. This happens both when manually adding the contact and when adding it from a conversation. The contact is stored for a short time, after that the entire entry is deleted.
I’m positive it worked before, but I’ve only noticed it since the new OS update.

Do you automatially sync you contacts with a cloud service or with your PC? Maybe the syncing settings somehow changed with the update and now your adress book on the phone is overwritten with the old one in the cloud/PC. I had this problem once syncing my old Nokia with MS Outlook…

Ok I did some more testing. I have my contacts connected to my outlook account rather than my Gmail account. Before the new OS update adding contacts worked fine, since then the entry is deleted after it synchs with my Outlook account. I don’t have an address book on any local device.

I can’t find a setting where to disable this synching, although it should just add it to my Outlook account. Any suggestions?

I’m not totally sure, but I had a (maybe) similar issue with a DAVdroid account:

When I try to create a new contact I cannot select an account anymore, the gmail.com account is preselected and cannot be changed. Before the MM update on Android 5.1 I could e.g select my Davdroid account I wanted to assign the new contact to. Am I missing something or can anybody approve this behavior?

I have had the same effect some time ago. The reason for that was, that I had deaktivated the app “Kontakte-Speicher” (=contact storage (?)) in settings, apps, all apps. After activating this app again, the storage off contacts worked again.

I have somewhat a similar problem, but not entirly. Suddenly, half of my contacts are gone (it happened 3 hours ago)! How can I restore them?
I’m not sure, but I think it are only the contacts I saved between the time I got a second SIM-card in September and the update tot android 6. My ‘old’ contacts are still there, together with the 2 contacts I saved after the update.
I do not sync my contacts, I presumed they were saved on my first SIM (which isn’t the case probably…).
Is it possible to find them anywhere?
I can add new contacts (at least for 5 minutes now), they do appear in my contactlist and in my messageapp, but they don’t sync with whatsapp.

Karen, do you have any messages messages from the missing contacts? If so, if you add one of them back does it stay?

Yes, I added one back half an hour ago, it appears in my contact and in my messages, but not in my Whatsapp. I rebooted the phone, and the contact stayed.
So I think it is a slightly different problem than yours…

Fingers crossed. I checked Heiner’s suggestion. Contacts was not disabled, but I disabled and then re-enabled it. 40 minutes later and new contacts are still in.

I’m going to try that too then… It is not disabled either, but you never know…

EDIT: contacts did not come back…

Sorry, that it didn’t work for you! To be sure, that you choose the proper app I ad a sceenshot of my phone. It has to be the “Kontakte-Speicher” app (contact storage app), not the contacts app. 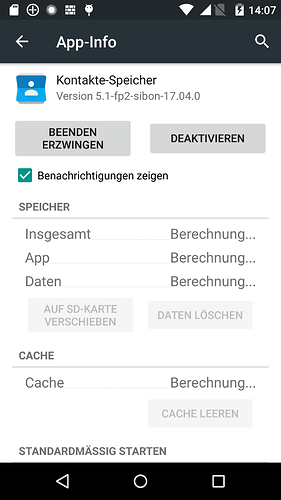 Now this is strange. I don’t have that app! The English name is Contacts Storage, there isn’t an app like that on my phone and I can’t find it in the Play Store.

Additionally, when I choose to not synchronize my Outlook account in contacts, that turns itself back on automatically.

Could it possibly be that because this app is missing from my phone, it’s not saving changes but also won’t allow me to not synch contacts since there’s no local storage?

Hi VS84,
good question! I am not at Android 6, OS 17.04.08! I am using the open OS and therefore still on Android 5.1, OS 17.04.0. So that might be the reason for the differences. I have made another sceenshot, where you can see some off the apps on my phone,when you look at settings/apps/all apps: 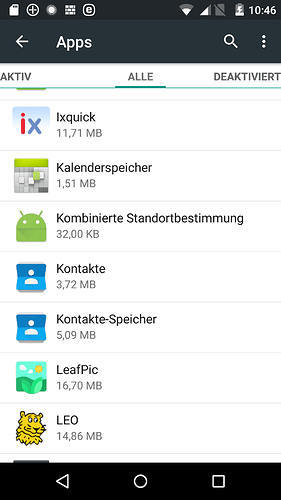 @VS84: To see the contacts storage app in Android 6 you need to switch on the displaybof system prosesses in the Apps overview. You can find this setting in the 3-button menu in the top right corner of the Settings - Apps screen.

Thanks, I found it now. This was turned on. Disabling and re-enabling it didn’t solve it.

I think it’s about time I open a support ticket with Fairphone.

Well, I was in touch with Fairphone support. Got standard text blocks, and was eventually suggested to reset my phone. Surprise, that didn’t solve it.

This is extremely frustrating as I can’t use a basic function of my phone. Between this and my girlfriend’s Fairphone 1 not getting the promised security updates (your phone stays current with continued updates!) I see no reason to recommend this brand to anyone.

I own a fairphone since a month and a half, and I had no problems whatsoever with saving my contacts, but now since a few days I do have the exact same problem as you have. This is very annoying, as, as you said, this is the most basic function a phone should have…

I was wondering if in the meantime you had found a solution to the problem?
Thanks in advance for your answer!

A workaround I found is going into Google Contacts and adding the contact there. It’s really annoying and since I don’t have mobile data, I can’t add contacts unless I’m on wifi (and fuck open wifi networks).
Adding the contact in this roundabout way does keep it, so it’s definitely a synching issue.