We have another reproducer!

I had a chat with @StevenHachel, he installed Netflix 5.x and got the same error on LineageOS.
(Steven’s device isn’t encrypted, so that’s definitely not the reason for this problem)

Did you try to collect some logs with logcat in order to see if there’s some error somewhere during the use of Netflix app?
Bye!

that’s right, but you can download the app from other sources as well, and then the installation will fail, with version 4.x working.

d. (Optionally, if you still want root) get the su arm 14.1 addon from here (this is not included in the official builds by default!)

Might just be the cause. (I know, it is quite illogical, but …)

Did you try to collect some logs with logcat in order to see if there’s some error somewhere during the use of Netflix app?

@DjDas
Yes. I’ve put them into the bugreport I created.
https://bugtracker.fairphone.com/project/fairphone-lineageos-on-fairphone/issue/22

Exactly!
Nothing more, nothing less.

This means, rooted devices with LineageOS can run Netflix 5.x!
(like my Samsung Galaxy S4 Mini running LineageOS with addonsu)

As long as you don’t install addonsu (https://download.lineageos.org/extras) you can even download Netflix from PlayStore (I’ve tested).
That’s because without addonsu you don’t have root access (/system/bin/su), which is what the PlayStore is checking for.

But because of this is may be hard to get help from Netflix.

Rooted or uncertified mobile devices […] depending on configuration, may not function properly.

My current guess is, that this problem is something about:

Unfortunately I do not much about building LineageOS ROMs. So maybe someone can help who knows more about that.

Another idea, how to find out what’s happening:

But Netflix also says, that not every Android 5.0 device is compatible with Netflix 5.x.

The most recent version of the Netflix app for Android is not compatible with all Android devices running Android 5.0 (Lollipop).
https://help.netflix.com/en/node/57688

The trick is to find out what possible relevant feature was added between Android 4.4 and Android 5.0!

I guess it’s maybe some DRM or safe storage stuff, so Netflix can safely store movies without allowing the user to copy them.

My bad, the Netflix app from Play Store installs on recent LOS 14.1 nightly but I didn’t bother starting it (I don’t have an account). It actually doesn’t work as it doesn’t start up. They suggest to download an APK instead of version 4.x. I started that version and it starts up, but I didn’t verify it works beyond that (again, no account).

[…] It actually doesn’t work as it doesn’t start up. They suggest to download an APK instead of version 4.x. […]

That’s exactly the problem with Netflix 5.x we’re talking about. No need to login!

Perhaps a community member who feels like leading could contact Netflix but without any given authority from the community (it not being an official port) I am not sure how far that will go.

Ah right, that feature explains a lot actually. So what probably happens is in offline usage mode is it stores the DRM keys to decrypt the content in a secure enclave.

FPOS (@ FP2) is guaranteed not rooted, so Netflix whitelist that. LOS @ FP2 might be rooted so it won’t work.

Remember, I have an Samsung Galaxy S4 Mini, running LineageOS. And Netflix 5.x works fine on it. So it’s probably not a device or os/rom blacklist/whitelist thing.

@JeroenH did a little testing and found out the following:

The the FP2 LineageOS ROMs had missing/incorrect libraries for WideWineCDM. Should be fixed in the next nightly! (probably 2017-11-14)

After copying, issue chmod and chown to each file.

Don’t forget to remount the system partition read-only at the end!

Netflix 5.9.1 works for me on the latest LineageOS+MicroG. 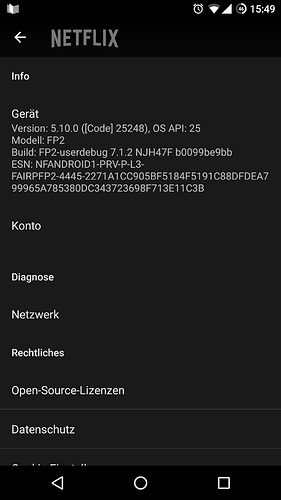 I did not pay attention.