My FP2: 3 years and counting

Hi Fairphoners
It is two years now that I started my personal smartphone era with an FP2. Having no sophisticated high-end device as a reference is helpful. But I like the mix of features and qualities: ethics, object of utility, relative sturdiness, and common features for digital life.
In other words, my FP2 provides what I need.

I also am reaching the 3-year mark of fairphone 2 usage and for the first time I’m experiencing some issues serious enough to consider buying some new parts.

First of all the battery is acting up and the quality is diminishing quite rapidly which is quite normal after quite a lot of charging in the past 3 years.

Secondly I dropped my phone a couple of times and this seems to be having some effect on the screen. The total left side (near the corner) is not responding anymore leaving me unable to type the keys ‘a’, ‘q’ and ‘1’ when holding the phone vertically. I have tried cleaning the connection point but it seems this was not the issue. However I’m a bit hesitant to order a new screen since I’m unsure what would happen if it does end up to be the connector issue and not a broken screen? Is there any way to test if the screen is the issue?

Thirdly I’ve been having some issues with the microphone in the past year with it working well and not on and off (depending on the day). I’ve seen multiple people with the same question but not sure if there’s a way to test what the issue is exactly (connection or broken bottom module)?

I’d usually recommend to contact your local Fairphone Angel to ask if s/he’s willing to let you test your modules on another FP2.

I agree with Urs. Test those buggy modules with another Fairphone owner.

Unfortunately I have a terrible experience with my Fairphone. After 3 years of having my fairphone2, i had at least 50€ of repair per year, not even taking into account all the reboots, mobile operators that do not work on fairphine and numerous informatic bugs. Not to mention the terrible quality of the new case that breaks easy and replacement is 30€. Today I need to replace my core unit which is 250€. Financaly, having a fairphone is an enormous cost, in 3 years I spend 900€ on the phone of average quality that allways has problems.
I strongly agree with the ethical and evironemental values of a Fairphone, but not at horrible product performance and extremly high repair costs.

I really feel for you and understand your frustration.
While it is hardly any help or making any of your troubles less annoying, please keep in mind, that Fairphone is a rather small company, that has developed and produced an absolutely new concept, independent from any of the global players or financiers.
As much as one expects a “simple” phone to work like all the others on the market, that just can not be expected in this case. And the Fairphone story is making this quite obvious.
That of course does not mean, that the FP2 is just a crappy device; there are lots of phones out there, that work quite smooth for years. The forum might give another impression, as users tend to turn to this forum, when they experience trouble rather than to say that everything is working fine.

That said, there is one point I have not heard before:

I have dropped my phone quite often and have the third screen already due to this clumsiness of mine; but the case has not even scratches (maybe tiny ones in the corners).
What do youu do to your phone? (Just kidding of course!!

TIP Have you seen, that they are selling refurbished phones at 299,- Euro right now? Maybe you could get yourself one of those instead of a core module. When offering the spare parts (display, cameras, cover …) here on the market place you could save quite some money.

Btw: Are you certain, that the core-module is broken and needs a replacement? Maybe it’s another part? First tip would be to get in touch with one of the #fairphoneangels, that could help you testing your device.

What if you don’t have a local Fairphone Angel (which applies to most of the UK, sadly)?

In that case you might try opening a thread in this forum asking for “… help in the area of …”. I would advise to open this new thread in the “Help”-category.
Even if there is no angel, there often is someone in this forum willing to act like an angel and to offer support.
And I would expect, that there are quite a few Fairphoners in the UK, especially since the Phone Coop sells the FP2.

Keeping my fingers crossed for you!

I was very happy with my FP1 and FP2.
Now I have to buy a new mobile.
Is there any expectation in FP3?
Otherwise I switch to an other brand.

Fairphone announced to be working on a new device that might be released later this year, more detauls were not given yet.
If you want to follow up the discussion here on the forum just search for “FP3”.

I granted you the bage

Hi! I also reached the 3-year milestone! Can you give me the badge?
Looking back, it’s been a long ride!

Starting with Android 5 Lollipop (do you remember the phone reminding you how long you’ve owned the FP2?

I still miss that one! (check these pics, they seem so old, now! )

I switched to FP Open OS, learned a ton with it, I lived the problems of upgrading to Android 6 Marshmallow, switched back to FP OS, had issues with the non-slim cover and spontaneous reboots, moved to Android 7 Nougat… and today I just bought the first spare part: a replacement battery.

I’ve shown the phone to quite some people, as well (always taking the case off to show the inside, it’s sooo cool!), and hopefully I’ll show it to many more for the year(s) to come!

There’s been some tough moments but overall, I’m soo happy to be a FairPhone owner, and support its movement!

Thanks for the badge

go to your profile to select it as a title

It took me some time to find out how the badge can be selected as a title. So here is how to do it:

Go to your badges and click the ‘3 years Fairphone 2’ badge:

Or just go to your profile > preferences and select the the badge under “title”: 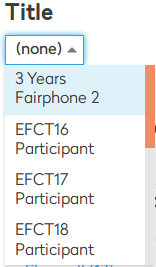 Having had my phone since the kickstarter, the 3 year badge would be cool.

I received a FP2 from a friend, it was a gift.
I have never expected too much of anything, my personality is so.
But after 3 years of use, FP2 made me more satisfied than I could have imagined.
Glad to see positive comments on Facebook pages like FB2Mate or Techgara, especially on this forum.
The only problem is the battery of the machine, I still don’t have time to replace it.

Hello, my Fairphone 2 today celebrates its third birthday. And so I would like to apply for the three years badge.
I received my phone on 07/072016 only one week after I had ordered it (via a retailer), and, in fact, I was very lucky there, because back then you often had to wait many weeks before you could even order one due to short supplies…
It was my first smartphone and I have been really happy with it.
It started with FP OS 5, but I soon switched to FPOOS. Such a great feature, to be able to eliminate G%%xle (as much as reasonably possible) from my phone.
Meanwhile I have switched to Lineage with MicroG (I could not wait for Fairphone to release the Android 7 version of FPOOS…).
I had some minor problems during my frequent OS changes, but almost all of them could be solved with the kind (and patient) help of some members of this great forum. I have learned a lot of interesting and useful things in that process.
I had to send the phone in once when it didn‘t start any more, and then the core and bottom module were replaced on warranty (so strictly speaking maybe not all of my phone is three years old…). But apart from this, my FP2 has worked like a charm all the time.
I am on the third back cover (had two transparent ones, which have both cracked - but they were soooo cool…) and on the second battery.
So maybe my Fairphone is not all that sustainable in my case, after all. And I have had some problems with it, which for me were not really upsetting (I use my phone much more for tinkering with it than for e.g. social media – others might have been disappointed by the little problems I have had). I still love my FP2, I love the idea and the ideals of its makers and the way they try to make electronic products and their production a bit better.
I hope I will be able to apply for the four years and the five years badge for my FP 2 in due time…

Applying for the badge too! Bought one of the first batch during the kickstarting capaign, received in january 2016 and using happily since then! There have been some glitches and minor problems, but I would definitely buy it again, and I proudly show it around when someone notice it

Hi there,
me too, I also just wanted to let you know that my FP2 works very well since the beginning on January 17th in 2016! Never had to change any module, only the cover I changed two times due to the black rubber part coming loose.
Still on the first battery although it only lasts 0.5 to 1 day with normal use (especially when watching video or listening music via loudspeaker). But I think its not a problem of the battery (I measured the remaining capacity and it has still around the same mAh as an Iphone6) but more of the energy demand of the phone. But since there’s always a socket and a charger nearby, thats no Problem.
I switched from the original OS to FPOOS and its working good, though I had to do a lot of research and trial and error procedure to make the microG stuff working (localization, signature spoofing, fake store etc). Although for example localization is sometimes not working very well, I even enjoy that because that means that no App ever is able to track me then

Only one single time I had to take the phone apart because the power button wasnt working anymore. A bit cleaning and reassembling did the trick.
I’m sorry for all the people having these major faults in their phones but I’m still wondering how many of these faulty phones are out there because I know 5 FP2 owners in my neighbourhood and none of them has these severe issues! I mean of course, there are some reboots once in a while or sudden battery percentage drops and other minor errors but thats nothing severe.

So in conclusion, I very happy with my FP still after 3.5 years and thats why I also want to apply for the badge.
Thank you!