Yes, I did try to switch off and on again.

Did you test yor sensors?

There are a lot of apps, like satstat from f-droid, or probably more or less anything that shows sensors. Or probably the faiphone checkup tool

Thanks : )
I tried StaStat. This is the result: 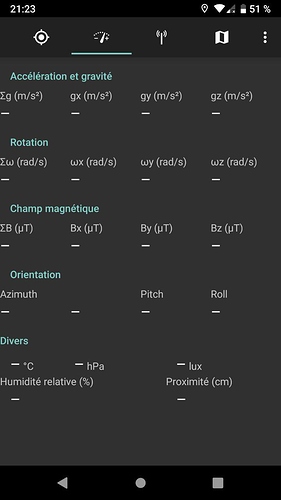 And actually the automatic light sensor for the screen brightness doesn’t seem to work either. 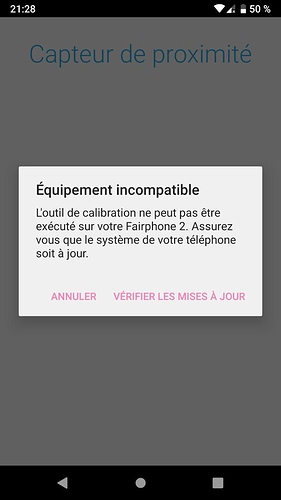 This looks like your sensors are dead. Here are mine 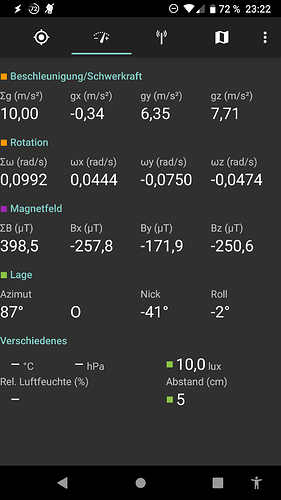 This looks like your sensors are dead. Here are mine

Actually when I start the phone on another OS, the sensors are fine.

Did you upgrade from LineageOS 15.1 to 16.0, or did you install 16.0 from scratch (wiping the whole phone from everything and setting it up completely from the start)?

I did the upgrade. I guess you’d suggest “wiping the whole phone from everything and setting it up completely from the start” ; )

I guess you’d suggest “wiping the whole phone from everything and setting it up completely from the start” ; )

As a fallback plan or last resort, yes.
For the moment it just serves as a reminder that there would still be something you could do if this doesn’t get resolved otherwise

I tried to install it as indicated here:
https://wiki.lineageos.org/devices/FP2/install
but got the same problem : \

To my surprise Battery Saving Location is working now

Here is what I did:

Now I wonder which of these steps made it work (I didn’t do anything else in between with the FP2)?

Is there a way to change the minimum brightness? It’s too bright for me (and eating my battery as well).

I agree. It’s too bright for me, too.

My current workaround: Go to
Settings > Display > LiveDisplay > Color calibration
and reduce the Red, Green and Blue values (to e.g. 50%).
Downside of this solution is that the display may now be too dark in bright environments like outside in the sun.

I found an app called “Brightness tweak” that hacked the minimum brightness back to 1 when it detected the system minimum was set (which is 10, I don’t know where it got that value from).

It’s crashing quite often but it gave some useful information, namely the path to control the brightness.

So I created a script that I run each time I want to set the brightness to the lowest level (at night):

I use the app “SH Script runner” to run it (with root) whenever I need. But I’d rather have the system minimum set to 1, instead of 10…

Since I prefer apps from F-Droid, I use Termux and the Termux widget to run the script. Works well so far.

In case anyone wants to to the same, more info can be found here and here. The content of my script is just this:

Of course you need root for this.

Just a quick one from me, long-time lurker, just switched to FP2 from Wileyfox Swift (with LOS).

I installed LOS16 on two devices the other day, a clean install and an upgrade from LOS15. Both worked perfect, just as expected. Both devices show the same little bugs that have been identified so far (like WiFi disconnects, a little lag after startup before the SD card is initialised), but its great!

Many thanks to @chrmhoffmann and all forum feedback people!

I’m using the build form 02.06.2019 on my FP2 (with the new camera module) and I have an issue with it: I cannot activate image stabilization for the video camera (the standard app). When I try to, the image freezes instantly and after a while the camera app closed with the message, that the media server has crashed. After restarting the app it continues crashing until I deactivate image stabilization again. Is anyone else facing this issue? Thanks!

Just tried this with old camera and i don’t see this.

Anyone with new camera can confirm this?

Just tried it with the new module. Same behaviour. It crashes. I’m on 0614

Edit: will try to get a logcat this evening

That sounds promising! How exactly do you have to install it?

How exactly do you have to install it?

I have the same problem of not functioning auto-rotation. (SatStat also shows nothing, did a clean install of LineageOS 16.)

Any ideas so far on how to proceed?