How 'inactive apps' is supposed to work?

After 1month, the “inactive apps” section in apps menu was still empty.
Today, after 1 month and 2 weeks, almost all apps (except the ones that were running) were appearing as “inactive”. As soon as I launch an apps from the “inactive”, it appears in the “active” section, which seems OK.

Do you have this separation? How did it appear for you?

I believe it’s about how you launch the app. The app will only appear as active if you launched it in the last month from the home-screen, the all-apps-screen, the edge-swipe or the recent-apps widget.
If you are using a custom launcher, launch the app through a widget or any other way it doesn’t count. At least that’s what I experienced on FP1’s beta version of FP2 OS.

I use the FP2 launcher. And actually, after a restart of my Fairphone, all apps are now active, no inactive apps…

I also use the fairphone 2 launcher. And all apps are active since ever.

And there are a few apps, that I did not use at all.

Same for me. All Apps are still in the active section though there are some I never used.

Same here, I am thinking that maybe, each time I update the phone or wipe Dalvik Cache, all apps are “active”. And I do this at least once each month with beta update and personal tests.

Does this feature actually work with anyone? Once in a while - not sure about the frequency - a few apps move to the inactive part but it doesn’t take long for them to join the active apps again even though I didn’t use them.

Update:
After about 4 month this feature started to work on my phone. To me it looks like it does now what it is supposed to.

Yet another completely useless function in FP OS. 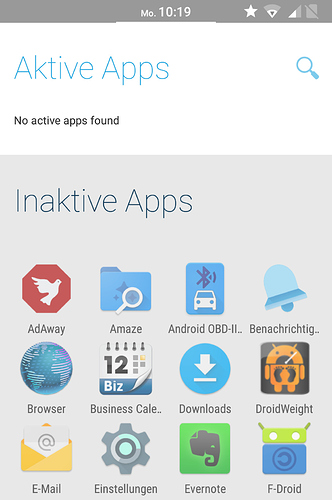 Couple of days before, it was populated. I have used apps on FP Open starting them with the FP Launcher since day one, well - since day “3 months”, because according to the highly useful “your Fairphone since” widget, my phone has been mine three months before i even bought it.

Is there a thread that is centered about Useless Fairphone apps that need a disable function? Because if not, I’ll start it.

You know, maybe I am seeing this from too small a viewpoint - mine. Maybe there are people who go “Omg need teh active appz list!!!111eleven”. I am happy to hear in which case this app has any use besides making the search for an app longer, - yet another small but recurring thing that makes the experience of using the FP2 worse.

@paulakreuzer , I can’t find the post, but I think you once told someone in another thread that there is an option to change the timeframe an app stays in the active list. The option is an invisible button that you have to know it’s there. Where was that?

First things first: all these FP specific functions that haven’t ever worked very well (at least not for everybody) will not be included anymore in the upcoming FP OS based on Android 6. So “enjoy” them while they last.

I’m not sure atm - that hidden button may have just existed in a preview of FP2 OS which I ran on the FP1, but it was in the top right corner of the All Apps view (tap there some times to see if it exists - I’d look myself but I’m not using the FP launcher anymore as it will be dropped too and I’m trying to get used to another one now).

there is an option to change the timeframe an app stays in the active list. The option is an invisible button that you have to know it’s there. Where was that?

It is just at left of the search icon

You have to tap on the blank space at the left of the lens icon and a three-dot menu icon should appear (I’m on OpenOS don’t know if it works also on normal OS)
Bye!

This is where you tap

And then you get a message saying:“Service unlocked: Check how long active apps have been inactive.” This is a free translatation. The German sentece does not make a lot of sense as well.

Now you can choose if it shall wait 4, 2 or 1 week before removing the app.

@paulakreuzer: You already have started to trying different homescreen apps?

I am always open for corrections

you believe the beta testing you mentioned will soon be over.

No, there is no beta test yet. I’m in the FP2 beta group and the only ongoing test atm is FP OS 1.12.0 which is still based on Android 5.
There must be a stable alpha yet as the community FP2 seems to run Android 6 atm.

believe you on the basis that you are a mod and have good connections into the company, therefore getting the news fast and being able to get a feeling of things.

Well I do have a few connections, but I didn’t sign a non disclosure agreement, so I’m not in the inner circle of people who know the companies secrets.

Probably. The first time creating the Open OS version will probably again take longer, but then hopefully it will only be 1-2 weeks delay again for each update.

But for this particular discussion please continue here:

FP2 will be shipped with 5.1.(1?). But will there ever be an update to Marshmallow (6.0)? Would be great to hear from the Fairphone Team. And of course some opinions from some tech savvy FP users... :smile:

Thank you @paulakreuzer for the many answers. This takes time from your life and I guess what you do is voluntary, so I am thankful.

Whops, I have read and understood this wrong.

Guess I was wrong. They are now beta testing a new googly Lollipop, so the reason for the delay in open Lollipop production must be something else. Maybe @Teemu_Hukkanen is sick?

Weeks only? Getting totally super excited

To be honest, I would already be happy with FP2 even staying on Lollipop - If it was stable
As an example, I never use FP2 as alarm clock. I use my GNEX because It does not randomly reboot in the night and forgets what time it is, just because it’s in flight mode.

I fixed your quote. You don’t need to take a screenshot to quote someone. Just mark the text you want to quote and tap “quote”. You can also quote from different topics. Simply copy the code that looks like this to the other topic:

But now let’s really continue over there. I’m closing this thread.

This feature will be dropped with Android 6.

Follow this discussion to find out when it comes:

FP2 will be shipped with 5.1.(1?). But will there ever be an update to Marshmallow (6.0)? Would be great to hear from the Fairphone Team. And of course some opinions from some tech savvy FP users... :smile: