The title says it all. A few restarts per day are now the norm. Before the update my FP3 was very stable.
But the fact that I don’t see any other similar threads on here makes me wonder if I’m an outlier or if maybe something else is wrong with my particular phone.
I would like to hear from anybody else who’s experiencing the same. And any tips for possible debugging steps are also appreciated.

What have you tried to resolve it,

There are similar threads

FP3 Restarts without warning when in use Fairphone 3

Hi, I’ve seen a similar question about the FP3 restarting after a reboot however mine seems to restart without warning and often when I’m in a call. Has anyone else experienced this?

I have one but it’s listed as “mobile storage” so i guess not internal (?)

I have now and I didn’t see anything suspicious

Thanks for your response!

Had not see this yet but it’s a bit older so it can’t be connected to the recent update and it does not mention any fixes so not very useful in the end. Thanks for the link though

Yes the frequent restarts were more related to early times.
As it never happened to me I wonder if it is a network issue.

99% of the time I use WiFi on 5GHz (calling, WhatsApp etc) and never had a problem.
On the odd days I’ve been away from home and use the network, again no problem.

But I ensusre, unless momentarily useful, I have either WiFi or network and no Bluetooth or NFC

What network are you using?

There are mentions of APN settings that I’ve never had to bother with.

I’m still doubting it’s a real update issue, unless your update had a glitch.

The following may be of intetest

My LTE data connection disappears at random while walking around. Full perfect signal, then nothing, than back to full perfect signal. Nothing in between. I’ve been trying to see if there is a correlation with specific locations etc. but nothing clear so far. Has anyone else noticed this with their Fairphone 3 or with their Fairphone 3 on Mobile Vikings Belgium, or on the Belgium Orange network (Mobile vikings runs off this)?

Such can be caused by faulty SIM vor SD cards, I would see what happens when you remove.

Have a look at this topic

Hi, for over one week now I am facing this issue: My phone gets randomly freezed first and then like after ~5 seconds it completely crashes. It doesn’t even matter what I am doing, it freezes all by sudden while using any app. And it happens on any time. For example: When I was watching a video with VLC it suddenly stopped playing. The screen didn’t react at all and then like after 5 seconds it completely crashed, meaning that the phone got switched off. This even happened when I was reading …

for now i removed a secondary SIM and the SD card. It will take a while to have confidence that a particular measure changed something and it is not that case that I just need to wait a little longer for the restart this time around

One of those things must have been it because the phone has been stable since then. My money is on the Telegram cache. I’m putting the cards back in now, then I’ll likely be able to eliminate this one.

Thanks all for your help, it pushed me in the right direction!

This is all useful info. Keep us posted!

Sure thing!
I can now say that it’s definitely the SD card (so much for my money…). After I put the card back in I started seeing a symptom I had also observed lately together with the restarts, which is that some apps wouldn’t start at all or would take forever to start.
I had previously chalked it up to what i thought was “the update issue” but now it’s clear that it’s caused by the SD card. After I removed it again all apps in question were able to start up quickly again.
I ran a quick test of the card under OSX and it didn’t find any errors. I’ll try reformatting next.

I have one but it’s listed as “mobile storage” so i guess not internal (?)

Just to be sure when you check Settings > Storage do you see the eject symbol/icon to the right of the SD card. ? 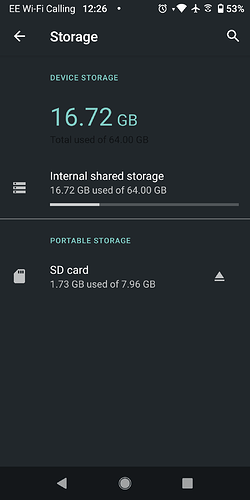