My Fp4 dropped just 1-2 times slightly perhaps from a hight of 30 cm. So far no real damage appeared, but it looks like the backcover is quite fragile.
It does not flex a lot instead it starts cracking and the pieces are quite sharp.

Is there someone else with similar experience?
Are the other colored backcovers different → less fragile?

As you can see, it has not started to crack somewhere, it happend especially at the places where the clips to keep the backcover in place are…

My feeling is that if FP can produce some backcovers with a slight different material mix things would be better. 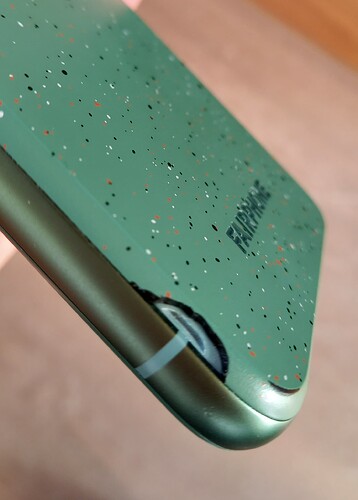 I can only compare this to a grey and a green (non speckled) one:

Maybe #contactsupport support, this could have been a manufacturing defect. But since you dropped it, I’m not sure they are going to send you a new one…

I’d suggest contacting Support, too. I’m a bit more optimistic than hirnsushi though that you’d qualify for a warranty replacement. 30 cm is something the phone should survive. You didn’t play balancing it on the top of your head.

I got similar cracks with a grey and a green back cover: 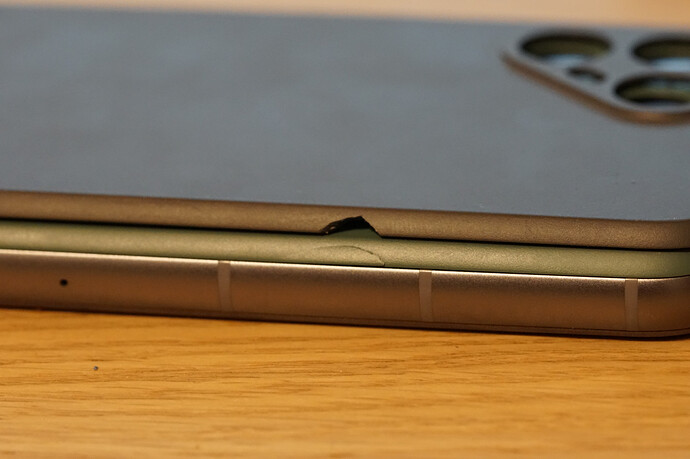 DSC021292000×1333 302 KB
The grey one cracked while taking off the cover, I did this quite often (>50 times) just for fun.
I did not take off the green one since I replaced the other one with it and I cannot remember dropping it more than maybe 5cm onto a table.
At least the second cracked back cover seems like a defect to me.
But anyway, it looks like these back covers have a weak point around the clips.
1 Like
pokemaster March 29, 2022, 1:45pm #5

I confirm that I also have this problem, like Alttaler said this weak plastic will most likely break after too many openings (like for fun). Mine broke on a clip when fell on the soft ground in a forest… maybe on a root. Still this shouldn’t happen so early, its just sad.
Keep in mind that this probably makes FP4 even less waterproof than before.
There really should be a metal or more sturdy backcover replacement, this plastic is just too weak.
I would also like to say that first opening of the phone was really hard, after few months it comes off easy. Each opening makes it more loose, probably up to the point of breaking. So my advice is do not open the case without need.

I have the same issue. My green speckled backcover cracked and broke after removing it around 5 times. It really is a shame.

Please contact Fairphone, hopefully you would to get a replacement.

Short update from me (initiated the thread).
I am not taking the back off to much.

).
So I had to order at least a new screen and in this shipment I also ordered a new back cover and the protection case.

First of all - it is sooooo cool to simply swap the complete display with just removing 8 screws. All signs of impact gone because the metal frame around the screen is part of the spare part

The the protection case: True is makes the device bigger, but I have to admit the handling is much better. It is a really huge phone now, but grabbing, holding it is really good. Zero slippy.

I personally don‘t understand why they chose this type of back cover, ie rather soft/thin with clips and the use of force to open it. with phones in the 2000s one used to slide a hard-plastic cover into position. i think that was the sturdier option. in any case, I opened my cover just once to install the battery and hope it stays shut for years to come.

My backcover got also a crack, but to be honest I didn’t remove the backcover for months. My phone never dropped. I think the cover has a kind of tension when it is on and the cover seems to be a little bit weak. Years ago I owned a LG G4 and it has a similar backcover, but it seems to be much sturdier. I used my LG for 4 years it dropped multiples times an the backcover never had problemes.

My backcover got also a crack, but to be honest I didn’t remove the backcover for months. My phone never dropped. I think the cover has a kind of tension when it is on and the cover seems to be a little bit weak.

This takes me back to the FP2 who’s covers were an endless source of problems. The soft covers came to bits, the transparent hard covers cracked. Eventually we settled on hard opaque covers which seemed ok; except the buttons would come away from the cover.

I want to buy an FP4 but after my FP2 experience I want all these early issues sorted (by then there will be an FP5 probably).

Also I see the supply problem is here again … no screens in stock, as it was with the FP2. For the same price as a new FP4 screen, my unfairpone (a MotoG8 Power) can have a new screen replaced by a workshop, so whilst it’s nice to be able to replace my own screen, there’s no cost advantage.

That and the lack of a headphone socket …

I still have no crack in either back cover (gray and green) even after taking them off constantly, sometimes multiple times a day.
I always just pop the cover just a little and slide round the frame with my fingernail (guitar pick works too) and it just falls off without any tension.

I’m not saying it’s user error in the other cases, the back cover should be able to withstand being pulled, that’s just a method that works for me and so far hasn’t failed me

Ok, nice to know. It was only a guess, because the crack is there and I have note removed my cover for months, nor the phone dropped… I only assumendo it must be under tension because the cover was always very thight and now, with the crack, it is a kind flimsy.

Would make sense to contact support. Maybe they would like to send you a new one and check out the old one. After all it is warrantied for 5 years if you registered.

Question: Those of you whose FP4 back covers (especially green and green speckled) broke, could you perhaps provide any insight into whether these covers have a black core – or are they green through and through?

Update: Nevermind, I checked both the green speckled back cover I have here at home and the spare parts shop photo – the whole inside of the back cover is black, so it’s layered or coated.

I’ve been experiencing the same issue and contacted Fairphone support, and received a replacement cover without a hassle. it took them 2 weeks to send me an initial reply, but once they did it was just a matter of a day or two before the backplate has been shipped out.

…and another of those cracks has just appeared on the new backplate, this time on the opposite side. oh boy, it’s not going to be very environmentally friendly to have them replaced every month.

Have the same issue, now four cracks on one side (picture seems not to be uploading, see below) and one on the other side. Clearly there is some weakness in the material where it clasps on to the phone. I have not dropped it on any hard surface and cannot figure out why the small pieces crack off. I have removed the back perhaps 15 times since I got the phone in February. I have contacted support today. Expecting a new back cover through the warranty, if not it is bye bye FP altogether.

(I have had three of them by now, FP1, FP2 and FP4. There were also issues with the plastic hard back cover on the FP2 but not too bad and it lasted 4 years without replacement.)

(Sorry for this, I have been trying for more than an hour now to upload a picture of the cracks, it still says “processing upload”. I have made the picture smaller (12kb!) but still does not work. Frustrations seldom come alone do they? Any hint and I will come back with a picture, I have mailed it ti the support at least.)

Hi Johan and welcome to the community forum

Thanks for posting with your experience.

Just to let you know that, as a new member, you won’t be able to post pictures, or more than two hyperlinks in your posts for a short while. This is just a security feature of Discourse (the Forum software), see here for more details.

Now I have a question of my own: just wondering why you’ve had to remove the back of the phone fifteen times since February? Would that be to get at the SD card or something? As a rule, I think it’s advisable to only remove the back when you really need to, even though it’s “designed to open”