I have the same problem with the backcover. The first one (grey) started to get cracks after two months; after another two months, the the same situation with a green speckled backcover. I did never remove this green cover, neither did the FP4 drop on a hard surface.
My dealer (vireo.de) has replaced both cracked backcovers.
But replacing a broken backcover every two months is not a sustainable solution at all!
My request with the Fairphone support was opened two week ago, without any response.

Does anyone of you use the “Protective Soft Case”? Any comments on this would be welcome.

Thanks and bye,
Wolfgang

Thanks for your reply. I can upload the picture once I get approved for that.

I should clarify that I have the grey back cover and phone.

Reason for removing the back about 15 times was due to a faulty SIM to start with (they ended up providing an e-SIM in the end). And then there were issues with a Samsung SD card that that did not work transferring from FP2 to this one. No unnecessary removals at all, actually the opposite, it is a hassle rather avoided. In any case, the back should be able to handle ca 15 times removal over 6 months. And, this weekend I got another crack-off on the other side and, just as all the other ones, it does not happen when I remove or replace the back, it happens quite sporadically, sometimes I find the cracked piece in my pocket, sometimes on my desk where the phone has been laying on its back. Is it that the back is so fragile that it cannot even handle vibrations from the phone itself?

Edited: Thanks, here is the picture from the one side:

Is it that the back is so fragile that it cannot even handle vibrations from the phone itself?

It does seem odd and that not everyone is saying the same. There was an issue with the transparent F3 back cover and a bumper was provided with the phone to mitigate.

I note you also say it happens randomly and from your detail not sure even if the pieces are in the corners or where you pull it up to remove it. ???

There was an issue with the transparent F2 back cover and a bumper was provided with the phone to mitigate.

Partially true. Most issues occurred with the transparent covers and still all of the second case version suffered from cracks (for some people more often as for others) especially at one corner. And no there was no bumper for the FP2.

I have pictures, but are not allowed to upload…

I have four pieces off on the side where the “opening slit” is (opposite the on button), and one piece missing on the other side. All pieces missing are very similar. They look like a thumb nail but only the rounded outermost part. It looks to me that they are on the places where the cover attachments attach to the phone, but I don´t want to remove it more to check.

Sorry I meant the FP3

So you say the FP3 was not shipped with the bumper from the beginning and the translucent backcover cracked quite often? I"m a bit surprised, the only “issues” with this cover I read about were the disappearing letter. So not that this is the topic here, but do you have any proof ( to avoid spreading of false facts)?

Yes I am a bit messy with my words.

My understanding is that the FP3 was issued with a transparent case, which was deemed too brittle and subsequently Fairphone supplied a bumper to protect the phone.

I don’t know as I didn’t have either, all the stuff I read is hearsay, but that’s fine.

It is not a question of which version of hearsay is true or not as each is true from the subjective experience but why promote a particular song unless it suits the mood.

I have pictures, but are not allowed to upload…

I have bumped up your trust level. So it should be possible for you now to post images. (Although new users should be able to post one image per post altogether.)

thanks, I upped the picture in the reply above now.

That picture looks awful, did you already #contactsupport about it did support reply to you yet?

I still don’t have any cracks in the back covers of the two FP4 I have access too despite taking them off hundreds of times by now.
Hopefully these are “only” manufacturing deficiencies on a few covers and not a more general design issue

It looks like the cover is being lifted over from the other side and snapping off the lugs, rather than lifting at the ‘open’ point and sliding around, so maybe a user issue ??

I’ve always opened the phone from the designated “open” spot and slid my fingernail around the opening, and still got the cracks. and my replacement cover has developed the crack on the opposite side, not the one with the “open” spot.

Just like I have done, thus it is not a user issue. Let’s hope the good people at FP can deal with this.

Nope. On the other side it is clasped tight. The reason you see a glitch between the cover and the phone now on this picture on this side is that the clasps (lugs) are no longer holding them tight together. Just like the noodlejetski below I have been very careful in removing the back. I will be more than willing to send the entire phone to FP so they can determine if they first send me a new one. Still no reply from either the reseller or FP.

I can also add that my wife got her FP4 about a month ago (green) and there are no problems at all. Or should I add yet? Removed back about 5 times. Might it be a batch issue for certain series of the back only?

My thoughts have been running along the same lines. That makes it all the more important to #contactsupport with details of the unit, I suppose IMEI slot 1. With details they may be able to trace to a batch. I don’t know whether replacement covers would have individual serial or batch numbers, maybe on the packaging.

Yes, have done so, July 8, no word yet, but it is no panic, I have rubber bands prepared

Sliding a nail all around the edge might be a factor in why it’s failing. It can/should just be pulled off from the indent. I wonder if their engineers considered a need for it to tolerate being pried off in the way you mention. In any case I wouldn’t consider this user error because it’s not obvious how it should come off, and pulling even feels like it’s almost going to snap it. The cover just seems generally cheap and poorly designed.

To increase the longevity of your Fairphone 4, we designed extra features to make it as robust as possible. It comes with an integrated back cover.

The Fairphone 4 is designed with an integrated Back cover that acts as a battery cover, hosts the NFC antenna, and connects to the core module to contain all the other spare parts. 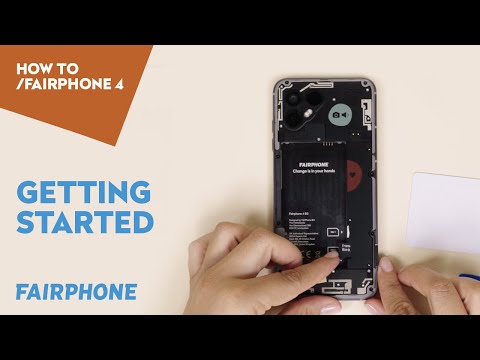 I’ve also got the crack which is about to turn into the same issue on my Fairphone 4 with green speckled background.