Just to reassure some of the more upset people here, that same here, all is working fine now that I’ve cleaned it - even with this protectionfilms24 screen protector. Hope it lasts.

Congratulations to you. The problem remains here and I have no protection film to remove

@paulakreuzer: Maybe thats interesting for solving this problem in the future:

I have the same problem with my sensor. Cleaning solves the problem every time.
I saw that the seal of the sensor isn’t saved from dust. The seals of the other sensors (on the inside of the display) are higher than the display. Only the Proximitysensor-seal is lower than the display. So dust can come in.
Sorry for my bad english… for better understanding i made some pictures: 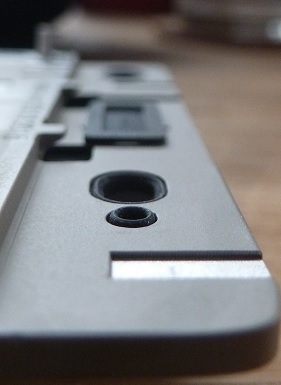 Here you can see it best:

For me its a manufactured failure… Changing the Display with one with a correct seal would solve…
Regards,
Jonas

Jonas, thank you for this helpful insight.
This sounds like the most logical explanation to me and is probably the reason why I have to clean that damn sensor every two weeks…

I will check the same on mine and if it is the same write the Fairphone support again.

@woka thanks for this information! Nice catch and great pictures! (Obviously not taken by a FP2 ;))

Maybe thats interesting for solving this problem in the future

I contacted @Douwe and asked him if it would be possible to make this slight adjustion in the design for future FP2s being produced. Let’s see.
Maybe we could come up with a #hardware:diy solution as well? Maybe a simple rubber-band glued around the proximity sensor window would help.

Thank you @woka for this insight. Personally I cleaned my sensor once with pressured air and it helped so far but I can’t say for certain that dust is the cause of this issue.
I’ll forward your post and pictures to the Hardware dept. and hope this will help them.

I hope that Fairphone is able to fix this issue since it really is annoying. Just cleaned the sensor for the fourth time!
And this cannot be the solution to a problem for a phone with a price tag of 500 euro…

I just got some feedback from Olivier Herbert who is the CTO of Fairphone. He is investigating the matter, but wanted to share this with you:

It’s important to note that the seal is formed by the combination of both the gasket on the display frame (which is flush/slightly recessed) and the light pipe on the top module (which is protruding). The other seals are formed only by one element, hence the need to have it protruding.

I am just adding the same problem. I did clean my sensor, but it didn’t help… I know use the workaround but changing the power button but I’m also quiet disappointed in this functioning.
Annick

@Douwe: Thank you for your fast acting in this issue.

I dind’t noticed the counterpart of the seal and its a technical explanation for me.
With my curiosity i opened my FP again and had a look on this counterpart.
In my Phone the seal has an inclination, as you hopefully can see on this pictures:
Angle is flat from the bottom

I don’t want to split hairs (caution: german phrase). I hope this helps Olivier by investigating.

p.s. I would like to make those photos with my phone

Ok, i have the same problem. The on/off button trick works when you make a regular phone call. When you call with Whatsapp, this does not work. And if nobody answers your call, you have to get the battery out (annoying). The proximity sensor does not register anything, so i wanted to open up the phone. Unfortunately i cannot slide the screen of the body. On the youtube video it seems very easy, but me and my colleagues did not work this one out. HELP

Unfortunately i cannot slide the screen of the body.

There are some tips and tricks here:

A post was merged into an existing topic: [HowTo] How do I replace a module/the screen?

If you press and hold the power button for 15 to 20 seconds, the phone will reboot.
This should spare the tedious process of removing the battery.

2 posts were merged into an existing topic: [HowTo] How do I replace a module/the screen?

Solution? In my terminal works!
I enter the phone number and pulse often any symbol (speaker, dialing fools …), the screen goes black but then activated and operating normally.
I do not speak English and I translated with google, sorry

the issue of the proximity sensor is still not solved. I have issued a repair at Fairphone, because cleaning does not work. But up till now, no reply or a repair process in effect.

Just wanted to report that I have the same problem. Screen stays black when I move the phone away from my ear. Can’t end the call. Sometimes the screen lights up again after 10-20 seconds, sometimes it doesn’t. Then a reboot is necessary. I still have to test wether cleaning the sensor helped.

A “real” solution would be very welcome!

I still have to test wether cleaning the sensor helped.

A “real” solution would be very welcome!

Erm, cleaning the sensor is the only real solution if dirt is the cause of the issue. If it doesn’t make a difference for you than that’s another story.