@wolferl I do have the same problem rather randomly and the power button doesn’t work in those instances. Only right after the other side hung up the screen will light up again.

This problem is rather strange.
After I could not reactivate my screen during calls, I also opened up my FP2 and cleaned the proximity sensor.
Then it worked again. For two weeks.

Now it works sometimes.
But sometimes after a reboot the app “Sensor test” says “Far” and then “Near” as soon as I cover the proximity sensor. But then it is stuck to near.
As soon as I reboot the device I am able to repeat this step exactly once.

Its the same with phone calls! When I call someone and do not cover the phone with my ear the screen stays on. As soon as I take my phone to my ear and put it back away the screen stays dark.

So is this a software bug or not?
Please Fairphone fix this as soon as possible. This bug is really annoying.

The black screen / frozen screen-problem on my FP is solved with the hint we saw here already : to dis- and reassamble the Display. as described in https://de.ifixit.com/Device/Fairphone_2.
I am not a consumer-electronics-design and manufacturing specialist, but in my eyes it seems to be too high electrical resistance between the golden contacts on the backside of the display. Probably a problem that happens due to not propper assembling or not propper designed contact material.
Anyway, I hope the simple way to put off and on the display is a one-shot solution and does not need to be repeated periodically.

I have the same problem - after a few weeks of usage sensor started to think that something is near it all the time :/. I will try cleaning it, but tbh after having an iphone for a couple of years I took a phone needing only minimal maintenance for granted, I haven’t expected anything like this at all.

I also opened up my FP2 and cleaned the proximity sensor.Then it worked again. For two weeks.

Now it works sometimes.
But sometimes after a reboot the app “Sensor test” says “Far” and then
"Near" as soon as I cover the proximity sensor. But then it is stuck to
near.
As soon as I reboot the device I am able to repeat this step exactly once.

So is this a software bug or not?

Not necessarily. To me it sounds like there is again some dirt on your proximity sensor - not enough to trigger it by itself, but enough to leave it triggered.

I had this exact issue too. At first it was intermittent starting about 3 weeks after phone arrived, got worse such that after a month it did it ever time I made a call (note: even without the “power button ends calls” option, if you press and hold power button for 10 seconds it resets phone so no need to remove battery). Just removed screen and cleaned with an air duster and working fine now!

However there was dust and lint behind the screen, and noticed the foam surround that is I guess meant to stop fluff and dust getting into phone through the speaker mesh is damaged. This is first time I’ve removed back so assume it’s from factory and contributed to dust ingress that caused this problem? 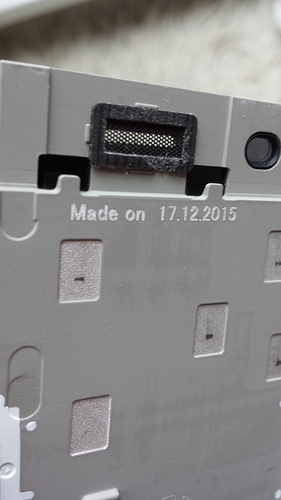 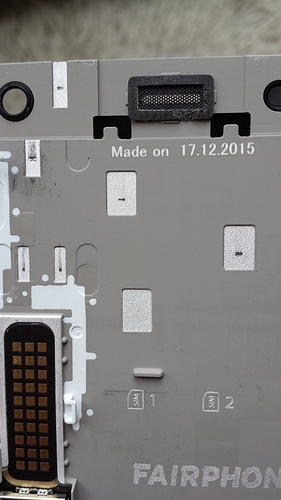 Yes that could be a reason.

But then this could be a design flaw of the FP2 itself - I really do not want to open my FP2 every two weeks in order to clean it… That would also be bad for the display contacts I think.

Even though I dont think that this will be different with a new phone I am going to write support again (did that exactly 4 weeks ago and never got an answer - yes, I know they currently have a lot to do) and ask for an exchange.

I’ve got news due to this topic: I contacted the support and they advised all the facts that we all found out in this forum before. At last, I checked the function of the proximity sensor with the Sensors-App and yes, it is defective, doesn’t work.
So I applied for a replacement and filled in a request to send it back or to have the proximity sensor repaired. In about 48 hours, there will be an answer. I’ll have to follow the instructions in the next emails.
Keep you posted. I’m glad having found a solution for my “black screen” phone

I have the same problem. My screen does often not turn back on after calls, especially when the other person does not hang up. Recently this was a big problem when my bank called me for a pin that had to entered via keyboard. Also sometimes the touch screen freezes in other contexts (with light on). Every time, I can only take the battery out and fiddle the shell back on. So far, I cannot reccomend the fairphone to the many people who are curious about my phone choice.

When I use the fairphone to telephone the screen turns black when I put it to the ear. This is ok and when I got the phone the screen lit up again when taking the phone from the ear again.
Now the screen stays black and I’m not able to end the call if there is no answer.

I moved your topic here, because it’s the same problem. Have a look a the first post, maybe that helps…

After having read this thread I can add that the problem occurs even if I hold the phone in the hand and not to the ear!
Ending calls by using the powerbutton is a poor solution as is does not allow you to tap numbers to automated answering machines

Same problem for me. Stuck in the voice message, no way to end the call even when I clean the screen.

Only solution (VERY annoying) : press the power button until the phone reboots.

That + the bluetooth audio issue = a phone that’s not worth the 500+ € I paid, please provide a serious update asap !

Any of the sensor tests I do show the proximity sensor to be working just fine. Could there be another cause for this?

Hi Paul,
I think that if ‘only’ 7 people report it here it will happen for much more people. Not everybody reports it, especially not if already 7 people reported about it. Personally I have the problem very often, which is bugging me very much, but I didn’t report it.
So, yes it certainly is a bug. And if users have difficulty reproducing/explaining it, then I think that is something for the developers to find out. For me as an end user it is a major bug!

You are responding to a post I made 20 days after this topic was created. That was 2 months ago.
In the meanwhile this topic was in the bug reports category already, but then we decided to move topics that are not confirmed as bugs yet out again.

[…] we are going to keep issues where a software root-cause is not identified and which can’t be reproduced on a majority of devices out of the #software:bug-reports category and the bugs list.

Many of these issues might still turn out to be bugs but for now it seems only some phones are affected.

Even if these are hardware issues and not software bugs they may still be fixable with a software update (e.g. improve proximity sensor sensibility, touchscreen sensibility, …)

I think that if ‘only’ 7 people report it here it will happen for much more people.

Well, that might be true, but for the other side as well.
I had this issue once, and after cleaning the sensor from the inside, everything is okay again.