Hey! Did you somehow fix it? I think i have to replace my USB connector as well. My phone fell down to the floor while still being connected with a charger and now I have to adjust pressure from the bottom in order to recharge it. So I think changing this might fix the issue. I would be happy to hear how you proceeded with your usb connector and what issues you had to deal with…

The black rectangular componet just below the connector is by the way a proximity sensor to lock your phone display when you hold your phone at your cheeck while doing a call. I removed this component during my attemps to fix the phone, but then the screen did not lock anymore. This component was absolutely impossible to be removed with a standard soldering device, because it has not touchable pins.

I’m not an absolute beginner w hen it comes to soldering, but neither perfectly experienced and equipped with tools. I think that fixing this board might be possible for a professional repair shop.

I eventually ordered a new PCB, which was about 120€ after shipment costs etc. I broke that again after a couple of weeks, also by dropping the phone while it was connected to the charger and catching it on the cable by reflex. I’ll now stay at charging the phone like in the attached picture. Since the charger connector does anyway not fit to the badly designed phone cover, I always have everything I need

I need to position the phone like in the picture, and when I shortly tip on the upper part of the phone, it starts charging. USB connection does not work for me, and for moving files from the phone I now need to use a cloud service (copy.com works fine for me).

This all is quite inconvenient, but is works fine I don’t want to buy my third PCB that I’m afraid to break again. But when I will do that at some point, I will add a drop of super glue between the pins of the USB connector.

I’d love to find a cheap solution for this!

Have the cable loading problem as well and USB does not connect at all any more to my computer.

How can I send recorded audio files to a computer? I did not find any ‘sending’ with or uploading button in the app. Does somebody has a solution to this?

How can I send recorded audio files to a computer?

bluetooth file transfer (presuming your computer has bluetooth)? Various apps for this, e.g. Airdroid - I would be surprised if they doesn’t find this kind of audio file formats.

Or send them as e-mail attachments if there are just a few of them.

You need to locate your files in the file manager of the phone. (They should be in the folder “Recordings”.)

I hope my reply can help you even if your post is a bit old now!
It happens the same to me. The USB connector did not work anymore and it charged only in that position.
I’ve opened the phone and discovered that the PCB tracks soldered to the three central USB pins were broken (but you can still have some contact pushing the pins downward pushing the connector like you did).
I solved this way (with the help of a professional microscope and the help of my solder-wizard Fabio M.:
We have:

Could you please post the ordering code for the farnell-connector? 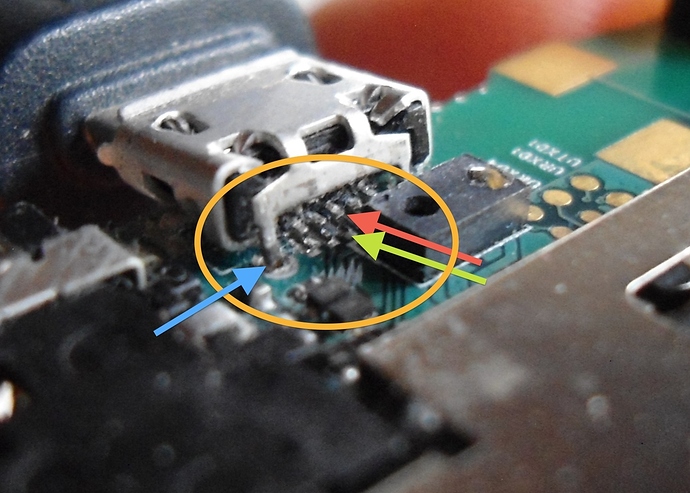