Recently my FP1 from october last year, as stated in the title, has begun slowing/lagging significantly while writing messages. It usually happens when either sending or receiving a message while trying to write the next. It causes perhaps 10-15 seconds of delay where I cannot type anything, or only a few of the letters/sentences typed appear when the lag stops. Does this relate to the size of the message file? Will it help if i delete all messages? I hope someone is able to help with this.

Edit:
It just came to mind that this isn’t just while messaging. When I connect to wireless and my Player FM starts downloading podcasts, everything slows down, and my FP1 becomes completely useless until the download has finished. When I press home, the screen will not load for 20 seconds, if i press the power button to turn the screen on, it will no do so for 10-15 seconds.

I’ve looked at my RAM usage, and there is 304mb left of memory. I’ve tried cleaning the phone using Avast Cleaner, but this hasn’t really helped much, and I don’t expect clearing caches to do anything but actually slow the phone down.

I hope this clears things up a bit, and that someone can help.

That might sound dumb but have you tried switching the phone completely off and back on again?

I have the same problem. Since a few days, the FP gets really very slow sometimes, not responding to anything for several seconds.

I’ve no idea what causes it, I just hope it’s not the beginning of this problem again… It always started with the phone getting slower and slower, but most noticeable when booting the phone.

Get Autostarts and disable autostart services.

Yes, this does not have any effect.

Can you explain why is this going to help? thank you

I don’t like the sound of that, mine has started switching off as well

Sorry, I was a bit monosyllabic…

Ahm, well, it was just a guess. The more apps you install, the more services run in the background/get started at boot time.

When I connect to wireless and my Player FM starts downloading podcasts, everything slows down,

There are also services that start at the time you connect to a network. Autostarts lists these services and lets you disable them.

You might want to try a factory reset and start anew with an uncluttered phone.

Same problem here! Since Kola Nut 1.8.7. update, the phone is turning slower and slower every day! It takes now 10 minutes to boot (blue fairphone screen) and around 8 seconds to turn on the screen every time I want to use it after having switchend it off. Also, texting and even dialing is very slow…

I had the same problem earlier this year, after a previous update and it ended with the phone being completely useless and me having to do a hard reset. Wouldn´t want to do that again… and every other time there´s an update…

I have very few apps (whatsapp, spotify, firefox, avira, adobe reader) and haven´t installed a new app since that ominous hard reset months ago. So I don´t think it has anything to do with the apps… Actually, the only change I made to the phone in the last few months was installing the new Kola Nut update!..

If anyone has any idea on how to solve this without having to hard reset, it´d be great!

If not, I´ll try the factory reset

But it would be great if Fairphone could look into this, so that users don´t have to go through this after every update

I would suggest that you check your battery. See a little guide to fairphones battery.

For those how have the slowing down FP1:
can you please check with an App of your choice, which processes/Apps are using the most CPU time (preferable with comparison before/after this behavior starts, if not always there).
I only have “BetterBatteryStats” to make this, and it does look for example as shown below.
But I am sure there are plenty of apps availabele to check this.

If you can claim any process/App which is occupying your CPU permanently, you maybe have a clue where to start for trouble shooting…
Cheers, Robert

Here the Screenshot with BetterBatteryStats for my well behaving FP1: 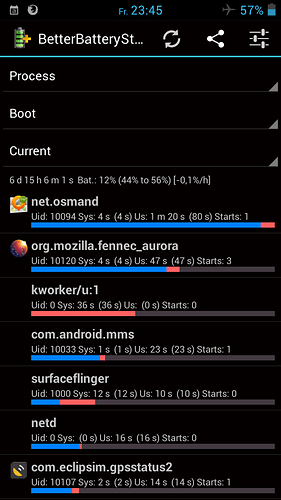 I don’t know it this gives enough information, apparently there are not many apps that give the “permanent” cpu usage. (I wasn’t really willing to pay 2,42€ for the BetterBatteryStats app, just for getting these stats once ;)) 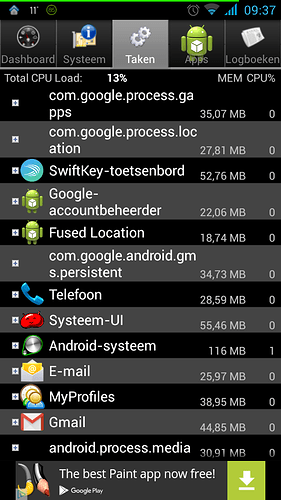 I wasn’t really willing to pay 2,42€ for the BetterBatteryStats app, just for getting these stats once

Maybe WakeLock Detector does the job

Can you sort by CPU usage? And within the xda forum the apk is free Form better battery stats…

Thanks, it worked.
I let it run for some time, but I don’t think I see anything unusual… 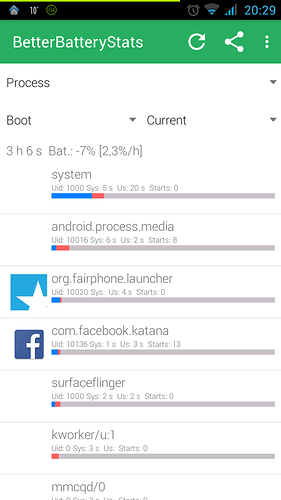 Maybe the Tool Usage Timlines (Free) might help. I think you have to configure it to show system processes to but then you can sort the running processes by CPU usage. Maybe you can discover a process that permanently needs much CPU time.

Thanks, I’ll try it!

Just for the record, I also noticed a significant slow down since the 1.8.7 update.

@Stefan, I think that a hard reset is not an option for everyone. Also, if apps would be causing this, restoring my backup would cause the problem to re-appear.

I didn’t install many new apps since the update, BTW. But I suspect that one which worked fine before is probably causing a significant drop in performance since the system update: I use twilight for automatic bed reading screen dim, and I suspect that the system-wide screen overlay is causing problems with, e.g., the responsiveness of keyboard apps. (I use Swype, BtW.)