We’re working on it (really this time!)

what kind of promo gear do you want to show your Fairphone support?

T-shirts…anything else? Maybe you want to add some ideas, @Stefan.

A FairPhone mug to drink your morning coffee (or, in my case, morning tea) from

FP2 module keychains would be cool. I’m just talking about plastic/3D-printed keychains that look like one of the FP2 modules or maybe another part of a Smartphone that is crucial for Fairphone like the ‘tiny friend’ (I think it was a capacitor).

I’m not sure I’d use a shirt, but I’d definitely pin a badge on my backpack.

hey,
I also think that shirts would be cool! Fairtrade of course!! And stickers please! Would be great to be able to order them with the FP2 so you just ship them together. I for example study at a university and stickers are an awesome chance to promote the Fairphone. I would love to put them on toilet doors in bars and clubs and places like that and on my laptop! so please sell stickers in packs of 20-50 so we can spread the news

How about pens made from recycled smartphone plastic (in FP blue of course)? I could imagine them in the hands of the CEOs of the electronics and mobile provider industries…

Pens are quite ordinary though… Some educational posters would be nice:

I asked a friend of mine and he said that Fairphone pens and notebooks would be nice to have. He said that the pens should not be biodegradable because this contradicts longevity (they literally rot between your fingers!).

Even more, biodegradable is not recyclable (it even causes problems when mixed with normal plastics for recycling). In fact, there are not many positive properties of biodegradable plastics at all…

That said, I think stickers would be nice to have (and easy to spread amongst friends)!

from my point of view biodegradable didn’t contradicts longevity. there are pencilleads out of metal and you can make the pen out of Wood.

T-shirts: how about a less baggy, v-necked version as well as the normal one?

Stickers: I have seen some FP stickers, they seem very plastic / outdoor. How about having some paper / indoor stickers as well? very often you don’t need the shiny palsticky ones.

I asked a friend of mine and he said that Fairphone pens and notebooks would be nice to have.

Please not another (plastic or other material) pen, I think everybody has 10.000 already!

But what would be cool and useful is a textmarker pencil. First you don’t use the chemicals of the normal liquid text markers and secondly it works with inkjet print-outs.
This is my fairphone-blue pencil (from Faber Castell). I also have them in yellow and green and orange. 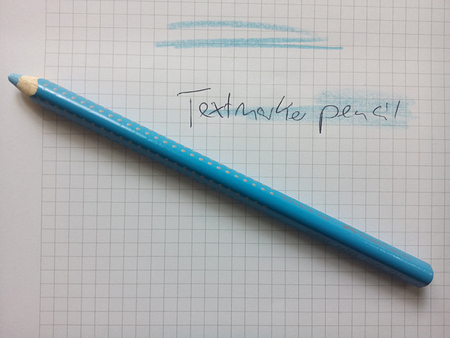 Ruth, I know this is not 100% your point, and you might already be aware of this, but there are women’s Fairphone t-shirts cut differently (wider, thinner collar, shorter sleeves – no V-necks though), not as “baggy” as the men’s version (although I must say I for my part actually find all Fairphone shirts a bit on the small and tight side – and I’m not that tall and big myself) that most of us might have only ever seen.

Tshirts, yes awesome! But only if it has a nice design and its not 1 of those wide models…
I don’t know if u know ‘fund the nations’ but they have really cool designs!

Badges on bags, easy to spread i think and nice to have.
Stickers i never know where to put them… Mostly u see them in the cities put everywhere… I think thats more polution then positive advertisement
Keychains i dont really use… I always collect them and take them to Africa for some childrens work, I put a name tag on it haha so easy for that though

Pens with the logo are also good. Those u can use -> very fair

As @Jerry, I would be in for a (big!) mug - I already have too many small ones and it makes it easier to print something nice on it - perhaps with a smaller version of the supply chain (world map) or one of @Stefan’s poster content proposals on it, this could be useful and educational, especially if you take such a mug to work…

As @Inge_van_Leusen already said, I never really need or know where to put stickers and even though I like the idea of raising awareness for the fairphone, I also think it to be much more pollution if such stickers are put around the city. But then, if people like to put them on their laptops and their own stuff, why not.

Postcards would be great as well, same as for the mug: I would prefer a meaningful content to just a logo, and please leave a maximum of the back free to write something on it… I actually still write postcards and do not only put one-liners on them.

As for pens, I would not mind but not sure if I would buy one - wood seems a great choice, however.
Same goes for the T-Shirt, not sure if I need one. It’d depend very much on the “statement” - again a logo alone would not convince me - but apparently a lot of people definitely want T-shirts and just in case, I’d also prefer (organic cotton) fair trade ones.

@Joe: If you put up any of these, provided that we’d like to buy them, could they be sent at the same time as the FP2 for those who ordered one in order to minimize environmental impact by repeated shipping? Could you add such a kind of option to the shop?

I would like to buy one or two fairshirts if they are fair and if they are cut alright (not too baggy!)
Something more difficult but more original might be shoes with advertisement. But I don’t know how many of us would buy them. Maybe flip-flops?
What does the community think about fair mousepads?

I personally really like to work with mousepads. I work a lot with my computer and a mouse just slides so much easier on a mousepad.

What about a stick, which could be use as a Stick or adapter for micro SD.
Challenge:

I myself am a big fan of merchandise, but I agree that it is not the greatest idea to put tons of it out there, particularly if the specs (socially and environmentally sustainable) do not add up. Anyway, I would get a t-shirt if there was one. Couldn’t there be a system like that for the 3D printed accessories, which you can order and will be printed somewhere close to you, so as to reduce transport emissions and shipping costs?