Updates clear code caches. They’ll “warm up” again in a few days, so always give an update ~4-5 days before deciding whether it permanently negatively affects battery life.

Also, downgrading is not a solution, merely a work-around. If problems with battery life do persist after a few days, providing feedback in the form of a proper bug report and follow-up information when requested helps the FP team localise the problem and fix it for the entire user base.

Will the new version be available for manual install as well?

As Johannes said, it can happen that the support article is updated with a short delay (done today)

Interesting. Is there documentation anywhere where I can see which phones are still receiving patches and those that aren’t? I think it is completely irresponsible for phone vendors to stop supporting their product after such a short period. This is one of the reasons I am supporting Fairphone. If a small company can why can’t Samsung et al?

If a small company can why can’t Samsung et al?

They can, but they just don’t.
If they supported their already sold phones longer, less people would buy new ones. So where’s the incentive?
This could change

This last update was a step back for my phone.

Bad luck, It have again battery drain and reboot once a day.

Show always WiFi in battery statistics although I switched off wifi

My phone always have had problems, but in the others updates improved a lot.

Installed this upgrade from 17.x on Fairphone Open via Settings->About phone after disabling Xposed (which required a reboot). Went smoothly, though the “upgrade” downgraded my TWRP to 3.0.2 and uninstalled Xposed. TWRP downgrade not a serious problem since all I needed was at least version 3 for support of encryption (not that that seems to mean anything on the Fairphone unfortunately). Xposed reinstall was easy enough, but if you’re super serious about your Xposed, the uninstall is an issue: between the uninstall and the reinstall there’s plenty of opportunity for apps to execute uncontrolled code, export all your contacts or whatever.

I guess that these instructions are probably still the correct thing to follow if you want to ensure Xposed is in control all the time. Not entirely clear to me which of the FPOOS .zips (ota or otherwise) you need though.

Went smoothly, though the “upgrade” downgraded my TWRP to 3.0.2 and uninstalled Xposed. TWRP downgrade not a serious problem since all I needed was at least version 3 for support of encryption

Encryption support was introduced to the Fairphone 2 port of TWRP in version 3.0.3-1 (post is here, but use twrp.me to download the latest version)

The release notes just say, that the TWRP codebase supports the CM 13.0 encryption but not that a build of TWRP supports it (it needs to be configured in a certain way). Download the official TWRP from twrp.me version if you want encryption/decryption to work.

Damn. I guess that’s a gotcha I wouldn’t discover until I next tried to do anything with TWRP. Thanks for the heads-up.

After the 18.04.1 update, my phone gets very slow sometimes and almost all the programs, which I’m using crash several times during use. Rebooting helps a little but then the problem occurs again. The phone also freezes during charging, which is also annoying. When is the next update and is this a problem with other users?

Did you skip the latest updates? 18.04.01 has patch level April 2018
https://code.fairphone.com/projects/fairphone-2-official-releases.html#fairphone-os-versions 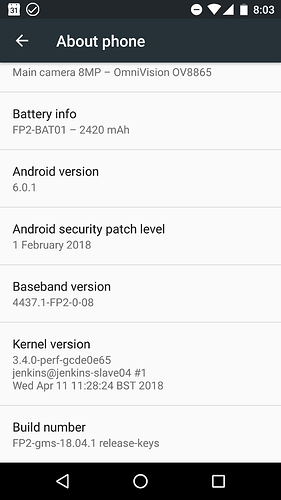 Please note: Due to missing platform vendor specific patches, the Android security patch level has only been raised to February 1, 2018.

Correct, but you want to read the first post, which explains why there were things patched which date to April, but the patch level string was still left at February …

Anyway … They now seem to concentrate on getting the Android 7 upgrade done, I guess regular security updates should resume afterwards.

True, but you have to make a difference between the vulnerabilities the SoC manufacturer patches and the general Android vulnerabilities. Since Fairphone decided to concentrate on the Nougat upgrade they just missed Qualcomm’s April patch set. Shit happens.

For what it’s worth, even LineageOS 15.1 is still on April 2018’s vendor patch level for all Snapdragon 801 devices - thank Qualcomm for that.

Yes, sorry, forgot about the two different patch levels: Android and Vendor (they are listed individually on Android 8).

My assumptions is it will stay like this until the Android 7 update arrives (planned for mid-september) and then the regular monthly patches will resume.

Which CVE are unfixed?

I guess all Qualcomm related CVEs from https://source.android.com/security/bulletin/2018-04-01#qualcomm-components

Feel free to join the beta testing forum and take a look at the public bugtracker for Android 7 to see how things are going on.